Neither of these teams are as bad as their records make them look.

I've ranted about the Whitecaps' bad breaks, of course. If there was any justice they'd have three or four wins, not two, and while the playoffs would still be a long shot at least we'd still be having the conversation. They're not a great team, that's obvious, but they're better than their record makes them look.

Yet if we feel hard-done-by we should just look at Sporting Kansas City. The last-place team in the East began their season with a ten-game road trip thanks to construction of Livestrong Sporting Park. They lost six of those ten, drew three, and won only their season opener at the also-hapless Chivas USA. They somehow managed to blow a two-goal 90th-minute lead against an expansion team, which you may remember. It was a miserable run of miserable games. They couldn't even win at Toronto FC at a time when points were free for the taking at BMO Field.

Again, Sporting Kansas City is not an excellent team, but they had one of the toughest runs in the league history. Since moving into Livestrong Sporting Park they've been on a good run, with two wins (at Dallas and against San Jose) and two draws (home to Chicago and at Philadelphia). Add those to two previous road draws and they're undefeated in six, a perfectly respectable run. Nobody can call them an MLS Cup contender but, on merit, they're certainly not the worst team in the East.

Both these clubs are vulnerable, obviously, but they're also both a little underrated. I've already said that we should have an exciting game. Can one of these teams win it?

I think we're getting pretty close to seeing Tom Soehn's first-choice lineup. Atiba Harris and John Thorrington are both out, as always, while Mouloud Akloul is expected to be on the bench at best due to his lingering hamstring injury. There's no reason to believe that Soehn is going to show faith in Teitur Thordarson's boy Greg Janicki any time soon, meaning Michael Boxall will probably once again partner Jay DeMerit in central defense.

Soehn's obviously decided on Camilo Sanvezzo on the left wing no matter how much I argue and the 4-4-1-1 isn't going anywhere. There are a few questions in central midfield; has Jeb Brovsky displayed Gershon Koffie in the starting eleven or was Koffie just getting a day off? I choose to guess that Koffie will once again partner Terry Dunfield because I can't imagine why Soehn would bench Koffie long-term. Apart from that, you won't be surprised by a single detail on my anticipated starting eleven. 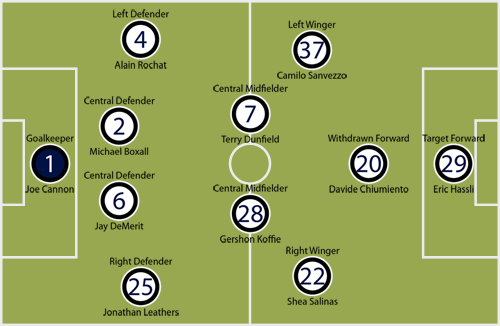 Call me a homer, but I think the Whitecaps have a slight advantage in this game.

This is largely because of Vancouver's superior defense. I keep mentioning it, but can you blame me? Jay DeMerit and Alain Rochat simply belong on another level compared to the rest of Major League Soccer. Jonathan Leathers, while by no means a flawless right back, is certainly capable and has been a big net positive for the Whitecaps. I have a high opinion of Mouloud Akloul and Michael Boxall is, at minimum, a fine defensive prospect and at best a good MLS centre back already.

Kansas City's attack is a bit disjointed. We remember what Teal Bunbury did to us at Empire Field but he accounted for two of his three goals this season in that game against a crippled Greg Janicki and an erring Jay Nolly. His consistency has been infuriating to Kansas City fans and he clearly isn't mentally ready to be a key professional target forward yet. Kei Kamara is a real talent but he's just one man and not particularly a soloist: you'll see a lot of good passes and stung shots from Kamara but not too much of the one-man-against-the-world creation that Guillermo Barros Schelotto made famous. There's the great Omar Bravo as the designated player forward, of course, but the 31-year-old Bravo has looked a little past it and barely been a factor.

So why do I give Vancouver the edge? Because whatever happens in the rest of the park I think Vancouver's defense should be able to keep Kansas City's attack under control. Anything can happen in soccer but, in general, Vancouver is just more likely to score than concede.

Will Vancouver pick up some goals? That depends on what we get from Eric Hassli. Very quietly, Hassli has moved into the top four of MLS scoring despite missing countless games with a bevy of suspensions. Nobody reading this needs me to explain his talent; unfortunately, he's the only player of his calibre in Vancouver. Camilo gets his share as a forward but, on the wing, he's limited to opportunistic chances. Davide Chiumiento is a marvelous offensive player but not, even his staunchest fans will admit, a goalscorer. There are some decent finishers further back like Rochat and Terry Dunfield but you obviously can't rely on that.

So while I give Vancouver the edge I'm certainly not predicting a Whitecaps victory. I see a draw in the cards, with two teams slinging balls through each others' midfields but lacking sufficient power in the final third to get past the defenders and ultimately canceling each other out. It could easily go in either direction: the Whitecaps defense utterly stifles Kansas City's attack and we snatch a goal, or Vancouver simply never gets the ball in Kansas City's area and they manage to get around Leathers or Boxall for a goal of their own.

There's a time when we'd have all been overjoyed with a road draw. Certainly a single point at Livestrong Sporting Park won't be cause for celebration, but I find myself more interested in Vancouver's performance than their result tonight.