I'm afraid that time forbids me to get too in-depth into the matchups today. Besides, there's really not much to say.

In Seattle, the Vancouver Whitecaps face an opponent who seem to be their betters at every position except, maybe, forward. The Sounders have their home fans behind them and the idiosyncratic turf of Qwest Field provides a formidable home field advantage without them. It's going to be a fantastic party one way or another and both teams are (hopefully!) going to put on one hell of a show. That said, I'm not foolish enough to think that Vancouver is likely to get anything out of this game... but we can always hope.

Then there's Canada against Guadeloupe, where the opposite prevails. Canada ought to win. They've looked pretty decent in recent games and, on paper, are far Guadeloupe's better. If they can keep the mental mistakes and the Rob Friend appearances down to a minimum then this is truly Canada's game to lose.

That said, Canada's made a habit of losing games that were theirs to lose. It's virtually our defining national characteristic. I'm in Tampa to watch that game in person, but not because I think this is a sure thing. No, it's because this is the one game that I'm confident we absolutely should win, and therefore I'm biting my fingernails down to the bone.

Both teams have a real teast ahead of them. The difference is that Vancouver has the easier position of being overlooked and seemingly insignificant. Canada must carry the burden of being the favourite. Poor devils.

An extremely quick word on the potential Canadian starting eleven. I don't know. How many players will Stephen Hart look to rotate out in this game? The predicted lightning storms don't look to be materializing but it's still bloody hot and bloody humid in Tampa; you don't want to wear out your best players in this environment when you don't have to! I'm expecting to see Milan Borjan in goal and Mike Klukowski at left back. I desperately, madly hope that we'll see Ali Gerba at the striker, and while I'd prefer to see Simeon Jackson either alongside him in a 4-4-2 or on right wing, I think he might get the night off. 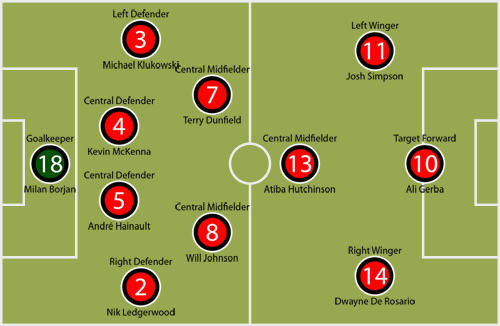 An equally quick word on the Vancouver Whitecaps starting eleven. Jonathan Leathers is expected to miss this game as well with his calf problem, meaning good news for Bilal Duckett. I don't think Tom Soehn will give us many surprises but, then, everything he does is at least a little surprising. The annoying prediction I'm making is that Camilo Sanvezzo will go at left wing instead of Russell Teibert: I literally changed my mind on this at the airport. Soehn hasn't shown a lot of faith in Teibert so far but he's given Sanvezzo lots of primo playing time. I can't imagine that Teibert will force Sanvezzo to the bench just because Teibert can do insignificant things like "pass" and "play the position to an even rudimentary degree". 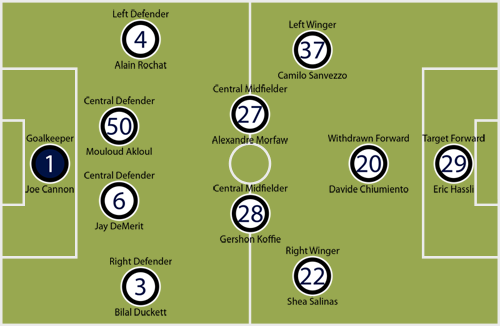 A bit of impromptu analysis? Both these games defy analysis. There's a good chance you know the Seattle Sounders better than I do. They have a strong midfield which, even without Steve Zakuani, does a good job of controlling play. In goal Kasey Keller is, apparently, ageless. They can do a good job of retaining possession against less skilled teams like, for example, ours. They're not a great team and they have weaknesses, particularly in terms of forward finishing. If it comes down to a shootout between Eric Hassli and whichever idiots Seattle starts up top, that's good news for Vancouver. Sadly, I don't think Seattle's midfield will allow it to get that far.

What do the Whitecaps have to do in order to get a result against Seattle? I'm not optimistic, as you can see. I think Seattle is going to have the lion's share of the ball, so the Whitecaps need to take advantage of the possession they do get. To use a dirty word in these parts, they need to play direct: long, incisive passes and quick, dangerous breaks. There's no reason it can't work; Vancouver has some pretty good passers out of the back in DeMerit, Akloul, and Rochat, as well as speed to burn. If Seattle takes liberties, a well-composed Whitecaps team could make them pay for it.

How about the national team, then? What do they have to do to get a win? It's a pretty simple game plan, actually: don't choke. 33-year-old Guadeloupan goalkeeper Franck Grandel plays a backup role for Dijon in Ligue 2 and has stolen games for the colonists before, but if Canada's shooting is even slightly on form they'll get a couple past Grandel at least. The Guadeloupe defense, made up primarily of teenagers and domestic players, is just no match for a determined attack by Josh Simpson, Dwayne De Rosario, Ali Gerba, and Simeon Jackson. I'd even give Rob Friend decent odds against them (though reports from Duane Rollins suggest he's hurt). Guadeloupe's forwards are a better bunch and all in the prime of life, but let's face it, Kevin McKenna and Andre Hainault should have that under control.

They should. Trouble is that Guadeloupe's made a career out of shocking teams that should have brushed them aside. Canada famously lost to them in the group stages in 2007 (though we got our revenge) and Guadeloupe also had a surprisingly strong tournament in 2009. Anybody in Canadian silks should be fully aware of the threat Guadeloupe poses, but there's plenty of new blood and maybe four years have dulled the shock of that defeat. "They got lucky, but we'll get them this time." That sort of thing. Canada can't fall victim to that kind of thinking.

Say what you will about Stephen Hart's crew but they're not guilty of taking most opponents lightly. If anything, they sometimes come out a bit too respectful of their adversaries. I don't think overconfidence will be a problem, but of course nobody ever does until it's too late.

Only one way to find out. This is a big day for Canadian teams, or at least the ones that matter.