These are the sorts of days I became a soccer fan for.

Today, at 4 PM Pacific time (7 PM local), the Canadian men's national team will play its sole Gold Cup tuneup match against Ecuador. Ecuador's a bloody good team: ranked above us in the FIFA rankings yet heavily underrated according to the more-accurate Elo system. They just played a blinder of a match against Mexico and nobody will be really expecting Canada to pull out a result... except that Canada's form has been so fast improving and the team we've assembled is so (relatively) strong that there's more than a little hope among the national team diehards heading to BMO Field in Toronto. Ecuador's good, almost certainly better than us, but they're still vulnerable. If Canada loses, nobody will be able to say we were hard done by. If Canada draws, then that'll be a pretty good day at the office. And if Canada wins, then we'll be heading to the Gold Cup with the best send-off we could ask for.

Then, just when we're finished catching our breath from what I hope is a whale of a match, the Vancouver Whitecaps and new ashen-faced supremo Tommy Soehn take to the field at the Home Depot Center in Carson, California. They'll take on Chivas USA, a team with three wins, decent form, a fairly good home crowd, as well as a boat-load of missing players and an opponent which nobody can predict. The Whitecaps could come out in any formation this side of an 8-1-1 and it wouldn't shock anyone. They could play Davide Chiumiento on left wing, on right wing, in the middle, at forward, hell, maybe he'll be the sweeper. No matter what Soehn does, he has the advantage of surprise. The Whitecaps have been playing decently lately. Chivas seems to be better than us but, again, one can sense more than a little hope in the Vancouver supporters... these three points might be there for us.

Two great teams in action, playing against the odds but with every hope of getting a win. I'm sorry, but if you don't live this, there's something wrong with you.

As Canadian men's national team head coach, Stephen Hart has proven to be rather conservative. He'll try a million players during friendlies but once he has a player he likes it takes a fair bit for him to play his way out of Hart's confidence. Only Adam Straith really played his way out of the lineup in Hart's tenure, and young Straith needed a couple pretty poor games to do it.So what do I expect from Hart's starting eleven? More of the same: the old 4-3-3 formation with Turkish league star Josh Simpson on left wing and future English Premier League forward Simeon Jackson on the right. Playing Jackson as a winger has always ground my gears: the man's a natural finisher who out-and-out cannot cross. I realize he's too small to be the target man in a theoretical 4-3-3 but, frankly, this team has never scored goals with their heads. Jackson can't cross and Simpson, for all his many virtues, isn't much of a crosser either. With that in mind, it doesn't matter how good a header your target man is because he won't get service.

I also expect Rob Friend to go at striker because Hart likes Friend. I'd pick Ali Gerba to start, you all know that. The man is tubby and his effort is erratic but he raises his game for Canada and is our most accomplished national team scorer. But, alas, they haven't made me manager yet.

I don't expect many surprises further back, with the possible exception of including Houston's Andre Hainault as the starting centre back instead of DC United's Dejan Jakovic and putting Michael Klukowski, an old Hart warrior who's out of game shape (he left Ankaragücü due to financial irregularities) at left back. I imagine that Hart will see what Klukowski has in the tank during the friendly and, if it turns out Klukowski doesn't have much, bring Marcel de Jong in for the actual Gold Cup. I'm putting Lars Hirschfeld in goal because he's the most experienced one: I'm sure Milan Borjan will see at least one game in the tournament, though. 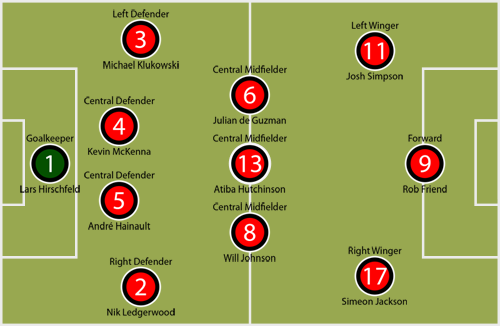 Predicting the Vancouver Whitecaps starting eleven is almost a waste of time but I'll give it a whirl anyway. As I said above the fold, we really don't know what Soehn is going to do. Speculation from supporters has just amounted to wishful thinking: the idea that Soehn is going to do whatever they want to do, because surely the brass saw the same thing wrong with Teitur Thordarson's tactics we did and that's why they put Soehn on the field.

I've spoken out in favour of a 4-2-3-1 for the Whitecaps and, indeed, it wouldn't surprise me if Soehn eventually went that way. But for his first game in charge I'm choosing to predict that Tommy will be conservative. Jonathan Leathers is probably still out with injury (although no definitive updates have been forthcoming), John Thorrington and Atiba Harris are definitely still out. Michael Nanchoff, Alexandre Morfaw, and Peter Vagenas are all on the trip with the team but I don't expect any of them to start. Terry Dunfield, Michael Boxall, and Nizar Khalfan are away on international duty. So I'm predicting Jeb Brovsky to start in central midfield for Dunfield, Wes Knight to continue at right back in place of Leathers, and the one lineup change that's almost not even a secret anymore: Joe Cannon in goal for Jay Nolly. 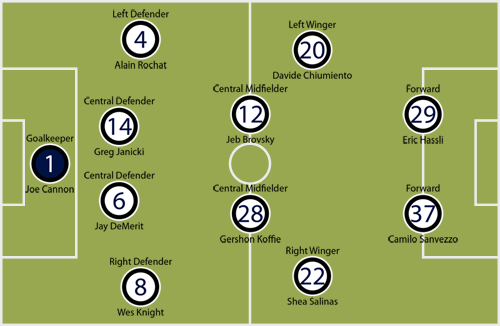 But I really expect to be wrong about... a lot of that.

A thousand words into this article and I haven't told you what to expect from either of these games. But that's because I really don't know. Picking Canadian national team games is a crapshoot. Canada's played some very decent games lately. They beat Belarus 1-0 in Turkey on an Andre Hainault goal: that was a very credible result from what was, by all accounts, a well-played game. Losing to Greece 1-0 was a shame; Canada probably would have eked out a 0-0 draw if either Borjan or Straith had been wearing their thinking caps, but even then they played all right and there's no shame in a CONCACAF team losing on Greece's home ground. A 2-2 draw with Ukraine was only disappointing insomuch as Canada lead 2-0 over the heavily favoured Ukrainians at half before succumbing. And before that was a 2-1 win over Honduras in Montreal which... well, it was a win over Honduras in Montreal.

Ecuador's good, but Canada's played well. Like the Whitecaps, Canada hasn't always been getting the results but arguably every game has been better than the previous one since September of last year. I don't really expect Canada to win before a crowd that will be at best supporting each country fifty-fifty. But I can't rule the result out.

And the Whitecaps... well, the Whitecaps could do anything. They could go down 4-0 an hour in and the camera could be focusing on an utterly stone-faced Soehn as the commentators talk about how the team's culture will take a while to build and Greg Janicki trips over his own feet trying vainly to clear a ball. Or they could romp out and beat Chivas by three goals in one of those games that ends with Whitecaps high-fiving each other for the sheer joy of it. Or, and let's face it, this is more likely, they could get a boring draw or a slight loss because this is the Vancouver Whitecaps and that's what they do.

There's no denying that Chivas is vulnerable. Moreno, Andrew Boyens, and Simon Elliott are all on international duty, depriving the team of one of their leading scorers and a starting centre back. Would-have-been star defender Jimmy Conrad is probably still out with a concussion and there are a host of other players fighting small knicks and knocks that may or may not keep them out of the lineup.

But they're not that vulnerable. Justin Braun, a ferocious 24-year-old forward with plenty of size and power, is still going to be starting at forward and will have to be carefully respected. The Whitecaps have had trouble with guys like him before. Former Toronto FC man Nick LaBrocca has instantly become a useful part of the Chivas lineup and his knack for making simple but well-placed passes could bury a defense that sometimes spends too much time on its heels. Chivas USA isn't a very good team, but they're a very well-coached team which has shocked some vastly superior opposition by capitalizing on mistakes and cashing in their chances. Any California team that can beat the New York Red Bulls in New York must be treated with serious respect even if their second starting forward is One-Legged Pete the Pirate.

Honestly, I find myself just hoping that one of Vancouver or Canada wins today. They could both win and make me a very happy man who would be obnoxious to my coworkers, or they could both lose and I might wind up jumping off the Lions Gate Bridge. No. No, one win would be acceptable.

(But two would be fantastic.)