For the Vancouver Whitecaps there's no such thing as a "must-win". But this is a "profoundly nice to win".

As I keep trying to explain to neutral fans and opposing supporters, there really aren't many expectations on the Whitecaps this season. We're a young team that will be running out at least two and possibly three teenagers in its starting eleven, a bunch of guys with nary a game of Major League Soccer experience, and of course now a nigh-catastrophic injury crunch. Before the season, most Whitecaps fans would have been satisfied with a competitive team. Well, that's exactly what we have, injuries aside. A lot of heart, a lot of fight, and some pretty good entertainment that's promising a hell of a 2012 season even if we don't make it in 2011.

So that's why this isn't a must-win, even against a mediocre team that's laying on its back, fat belly heaving, practically begging for us to stomp on them. On the other hand... well, we all want the Whitecaps to make some noise this year. To establish themselves as something other than automatic points on the road. The Chicago Fire are vulnerable. They're dealing with their fair share of injuries. They have a defense that's just bad enough for our struggling team to bust some slumps against them. The Whitecaps have every excuse in the world to lose this game and it wouldn't matter much if they did. Even a draw would be a real moral victory. But boy, a win would be nice.

Thinking about the Whitecaps' potential starting lineup, the biggest question for me was which formation they'd go with. Luckily, Teitur Thordarson was nice enough to almost answer for me when talking to Marc Weber: he doesn't think Shea Salinas is ready to go ninety minutes yet and he probably isn't in line for a start. Without Salinas in the starting eleven, I have to imagine that Vancouver will go with the now-well-known 4-4-2 rather than the 4-4-1-1 we discussed yesterday.

The next-biggest question was whether Thordarson would prefer Omar Salgado or Camilo up top; I'm choosing to go with what I want him to do because I really have no idea. Salgado started against Montreal but, then, he didn't look great and Teitur may want to rotate Camilo in. On the other hand, Camilo finished the game and actually wound up playing more, harder minutes than Salgado did while looking pretty poor himself. Hard to guess. Indeed, there's always the chance that Thordarson does something annoying again like rotating out Teibert or Chiumiento and trying to go less for offense. 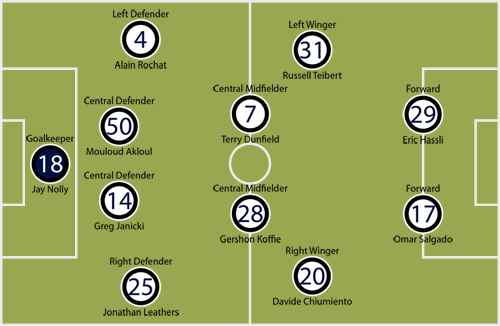 The Chicago Fire are almost the Whitecaps' Eastern Conference doppelganger. Mediocre teams that started off by winning early in the year but since them have stumbled around to a few interesting draws and mediocre losses. They're both eighth in their respective conferences. They're both generally offensive-oriented teams, with some nice scoring ability thanks to talented first-year MLS striker Diego Chaves/Eric Hassli, but have had trouble keeping the ball out of their own goal. Indeed, there's some down over whether journeyman goalkeeper Jon Conway/Jay Nolly, who had some experience as an MLS backup with Toronto FC/DC United, is good enough to take this team to the promised land.

The Fire, unlike the Whitecaps, have lost to some pretty decent teams. There's no shame in being beaten at Qwest Field by the Seattle Sounders or at Jello Park by the Portland Timbers. Their other loss was at home to the Los Angeles Galaxy, who I understand are pretty good at this soccer thing. Not a home draw to Chivas USA or Sporting Kansas City in the bunch. The one time we played a similar opponent in similar circumstances, we came off worse: Chicago drew FC Dallas 1-1 at home in their first game of the season and we of course lost to Dallas at Empire Field a couple weeks ago.

It's true that Chicago's defense isn't too inspiring, but they've been struggling against much better teams than we've been struggling against. Yamith Cuesta is a promising but slightly raw young centre back with big size and hops and could be reasonably compared to Michael Boxall. Jozip Mikulic is a Croatian with little North American experience but one who has adjusted well so far. Their real strength is at fullback, where 22-year-old Janil Anibaba is a first-class prospect and veteran left back Gonzalo Segares has been doing this for ages.

And, as I said, Vancouver has every reason why they might come up short today. Playing a nightmarish, ferocious extra-time game on Wednesday before flying a thousand kilometers to your next game will do that. I'm not the biggest believer in fixture congestion as a great problem in MLS, but there's no doubt that two hours of soccer in Vancouver on Wednesday followed by ninety minutes of soccer in Chicago on Sunday is a big ask. (Followed by another ninety minutes of soccer in Vancouver the next Wednesday; that'll be fun.) There are key players like Greg Janicki, Mouloud Akloul, and Russell Teibert who are just coming off injuries and may not be in top shape yet. There are guys like Davide Chiumiento who seem to never be in top shape. How well is Akloul and his bum ankle going to do against the likes of Diego Chaves, the 5'10" Uruguayan who is playing his first season in Major League Soccer and already storming towards the league's Golden Boot? There's a chance this game will be really unpleasant.

Of course, there's also a chance that Vancouver will find another gear. As I said on Canadian Soccer News yesterday, the key for the Whitecaps will be to reverse the mistakes they made in Columbus. You can't sit back, bunker, and look for a late chance with this team. An effective bunker requires defenders and midfielders with an almost telepathic connection; an encyclopedic knowledge of each others' tendencies and exactly where each player is going to be in the split second you have to hoof the ball away. The Whitecaps ain't got that. So matter how hard it might be and how heavy the legs might feel, the Whitecaps must attack. They must play that game they played against the New England Revolution in far more desperate circumstances. The Chicago defense is weak; if the Whitecaps pour on the pressure they will break it. Attack, attack, attack, try to get some goals or at least knock the Fire off their stride, and if you must lose go out with gunports open and cannons blazing. Sure, the team will be an absolute wreck for the Wednesday game, but that's another day and tomorrow never knows.

This is going to be a hard game for the Whitecaps, but a winnable one. If they have the will and the energy to take it.