Featuring Formations: Where does Teitur Go From Here?

Share All sharing options for: Featuring Formations: Where does Teitur Go From Here?

On Wednesday, we may have gotten a glimpse at the future of the Vancouver Whitecaps. Late in the second half, at the 69th minute, forward Omar Salgado came off for right winger Shea Salinas. It was Salinas's third appearance of the season and second in the Voyageurs Cup, whereupon he promptly slid back into right wing. Davide Chiumiento moved up a bit as a withdrawn forward, and Camilo Sanvezzo stood at the top as a target man. At long last, to the joy of those who had criticized Thordarson for his tactical rigidity, as well as the handful of us who voted for a 4-4-1-1 in Russell's poll earlier this week, Teitur had abandoned his 4-4-2 and switched it up.

We promptly conceded a goal, of course, off of Ali Gerba's penalty. But in extra time we got one back (off another set piece) and generally controlled most, but by no means all, of the open play. It was a decent showing against a Montreal Impact team that was just refusing to die. But was the formation a one-off or is this someting we can expect to see from the Whitecaps going forward?

I think we should expect more of Thordarson's 4-4-1-1. It's a formation he's used in the past with this team and one he used through the preseason until Shea Salinas got hurt. With Salinas on the mend and the team's wingers looking in good shape, I fully believe that Teitur will go back to the formation. So, since we're getting away from the bog-standard 4-4-2, let's take a look at what this means to the Whitecaps and whether it's all a good idea. 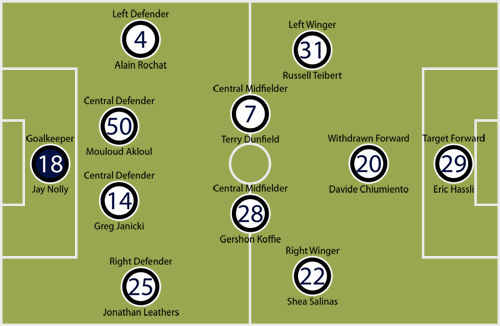 Above is a preview of what I think this team's 4-4-1-1 should look like, at least until Jay DeMerit gets back. I don't think any of it will surprise you. Four across the back, the same two central midfielders who've served us in good stead so far, our two best wingers, the obvious creative engine in the withdrawn forward position, and the big, strong, skilled designated player of a target man at the top, ready to run through guys and pound in balls like Gerd Müller on steroids.

One of the big advantages, usually, of a 4-4-1-1 is that it helps teams get back defensively and therefore prevent goals. Given that we're allowing a simply unsustainable number of shots on target and goals against, this is obviously an important consideration. Some commentators, and I'm thinking most recently of CanadianSteel in a FanPost earlier today, have suggested that the 4-4-1-1 could be a good formation on the road partially for this reason. But we're conceding like crazy at home as much as anywhere else. Given our increasingly obvious tendency to have some defensive troubles both at and away from Empire, as well as the recent panicky long balls late in games from overwhelmed defenders, a 4-4-1-1 would be good everywhere we play.

Besides, I'm not a big believer in switching up formations too often. One of the biggest factors in the success of a team is the chemistry between players and it doesn't help when each player is no longer sure where the other is. We've even been able to see it just in all the injuries the Whitecaps have absorbed this year: every game is a sort of feeling-out process, with players trying to learn each others' tendencies because this time last week they were in the hospital. It's contributed to a lot of our problems this season both in defense and attack. Switching formations based on the stadium we're playing in would just make things worse.

The biggest advantage of the 4-4-1-1 is that is balances our defense. One of the problems we've had defending in the midfield is that, bluntly, one of our midfielders is Davide Chiumiento. I don't think he could take the ball off of me if I was coming down the wing, or at least he probably wouldn't really try. Shea Salinas brings much more defensive responsibility (he's actually played some fullback in his time), but we still get to keep Chiumiento's undeniable creativity and playmaking flair. His position doesn't particularly matter since he'll go where he likes anyway, but as a central withdrawn forward he can go to town on offense without hurting us on defense.

He'll also provide a useful link for our transition game. Tired defenders who are a bit too unfamiliar with their midfield lead to long balls. Now they have options. They can go up the wing to Teibert or Salinas or through the middle to Koffie or Dunfield then Chiumiento. With two forwards at the top it was a little too tempting to go direct before; hopefully that'll change now. (Of course, the midfielders have to do their share: another big problem we've had is that our midfielders haven't been getting open when the ball's in our area. The return of Gershon Koffie to play his holding role has helped a lot, but not enough. That's not a matter of formation, though, that's a matter of discipline and of knowing your defenders.)

Theoretically, this formation should hurt our forward play. But it all depends on how the key offensive players come through for us. If we keep our attacks strictly station-to-station, we'll never score. If Chiumiento has the ball and he's definitely going to try to play it forward for Hassli, then it's incredibly easy for defenders to just key on Hassli and run Chiumiento out of options. Chiumiento is nobody's idea of a natural goalscorer: if a defense lays off him and challenges him to get a goal himself, I'm not sure he'll be able to do it.

So, in a 4-4-1-1 formation, the Whitecaps need to be doubly careful to spread the field. That, ultimately, is what will lead to scoring opportunities: if you have one target forward then you simply must spread the defense out to give that target man some room to operate. The Whitecaps have been exuberant in using the wings so far this season and I'm hopeful this won't be a problem, but still, teams must be made to respect our wide threat. When Russell Teibert has the ball deep on the left, he must know his options: short pass back to Chiumiento, short cross into the box to Hassli, long cross across the field to Salinas, play it back to a central midfielder, cut in and take a shot himself. He must be willing to do all these things depending on if the defense is cheating or not (so far, Teibert... and, for that matter, Chiumiento... have been far too unwilling to create their own shots). Otherwise, defenses will jam up the middle and goals will become few and far between.

Having raised all these worries, I should say that this is clearly the best formation for a relatively healthy Whitecaps team. It makes the best use of our skilled players and gives the really talented guys like Teibert and Chiumiento room to be creative without overburdening them athletically or defensively. As soon as Salinas is ready to play ninety minutes, I hope Teitur runs this formation full time. There's a lot of promise here, and hopefully a few wins.