Last week, both Major League Soccer teams got a clean sheet on the road in the first leg of the first round of the Voyageurs Cup. For Toronto FC, it was almost effortless: after Edmonton's Shaun Saiko was sent off, they put three goals past Rein Baart and Bob's your uncle. For the Vancouver Whitecaps it was just a trifle more difficult as the Montreal Impact fought hard before an uncommonly light crowd but, eventually, Russell Teibert hit one of his glorious crosses to Terry Dunfield who headed it home and, again, the favourite had done what was expected of it.

Now the tables are turned. Both big-money MLS teams will have the raucous crowds on their side, even if they're likely to be a bit less raucous for a night game on a Wednesday. All they need to do is keep the minnows under control, get at least a draw, and then they can get on with planning the final: Toronto vs. Vancouver, one of Canada`s fifteen or twenty most serious national rivalries. I'd love to come up with some cunning reason why it's not that simple but really, it probably is. You'd have to be completely off your nut to bet on Edmonton overturning a three-goal deficit at BMO Field, and even the Impact can't be favourites to beat Vancouver on their ground.

Still, you wouldn't have bet on Vancouver coming back from 3-0 down against Sporting Kansas City either. This why they play the games.

Let's face it, FC Edmonton's probably done. Shaun Saiko, the team's midfield engine, is suspended, and forward Alex Semenets is still hurt. According to a release from the team, the Eddies are leaving starting goalkeeper Rein Baart and forward Chris Lemire in Edmonton. Both players were sent off when Edmonton got pasted 5-0 by the Impact on the weekend and head coach Harry Sinkgraven seems to be sending a message. Lemire hasn't been terribly effective whenever I've seen him and Baart has been much, much worse. Say what you will about Edmonton's defense, but Baart has been getting the shit kicked out of him for about three weeks now. Unfortunately, the team's replacement is former Miami FC backup Lance Parker, who was the former backup for Miami FC. I really can't put it any more bluntly than that.

These guys are boned.

Because I'm an incurable optimist, I'll try and find a way FC Edmonton could get those three goals back. Let me see. With the tie so completely decided and Toronto in the midst of fixture congestion, Aron Winter will hopefully play the backups. Waking the Red has an expected lineup but even that's way too strong for Edmonton to hit a field goal against: Toronto's going to need to bring out guys I've never even heard of. Academy kids. Guys with missing limbs. People from the stands who are playing because they won a contest at halftime. Those sorts. And as Duane Rollins pointed out via Twitter, the senior TFC Academy team starts their season on Friday so we probably won't see too many of the real kids.

Even then it'll be tough. Now that Chad Barrett's gone, I'm not sure that the entire Toronto FC roster has any forwards so bad they couldn't score against Lance Parker if they're actually trying, with Edmonton presumably throwing the kitchen sink into attack. And where are Edmonton's goals going to come from? Conrad "No Pass" Smith? Dan Antoniuk, as if it were still 1999? Okay, if the Toronto lineup is weak enough or the players sufficiently uninterested, Kyle Porter has the quality to do something. And not even I will deny Smith's talent, even if he uses it ineffectively. And even Toronto's first team defense isn't too good, as the Seattle Sounders can tell you. And... oh, god, I almost think I'm talking myself into this. But I'm talking myself into it as a theoretical possibility. Like a healthy Michael Nanchoff, it's something that could happen but won't.

Then there's the game that's actually going to be competitive. I'm not expecting many changes in the Vancouver starting lineup. Russell Teibert should draw in at left midfield, moving Davide Chiumiento to right wing (I doubt Teitur Thordarson is going to take a chance starting Shea Salinas in this game). Eric Hassli will return from suspension and move in up top: I expect him to take Omar Salgado out of the lineup and partner Camilo Sanvezzo. Other than that, I'm expecting to see pretty much what we saw against Columbus, since that game worked out so well. 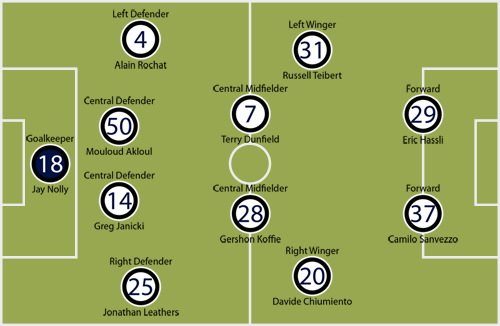 I don't want to play the overly nervous prognosticator. Vancouver's the favourite. Of course. They should be able to hold a one-goal lead against Montreal at home; frankly, that's obvious. Particularly given the way a slightly weaker Whitecaps defense and midfield managed to limit the Impact's chances last week. This ought not to be terribly difficult.

Of course, against this stands the great fear of the Impact finally remembering that they're actually a very good soccer team. We saw tastes of that on Sunday against Edmonton. Playing Edmonton's NASL home opener, the Impact eviscerated Edmonton 5-0 with the help of a brace from Ali Gerba. It helped that Edmonton looked absolutely awful: it wasn't a matter of the Impact playing well so much as the Impact finishing off all of the many, many opportunities they were given. Still. If the Impact are scoring on their chances again that bodes ill for a Whitecaps defense that has a nasty habit of conceding them.

Remember, we just have one goal to play with. If one of Montreal's panoply of skilled ball-moving midfielders happens to hit a cross to Ali Gerba's foot in the box, it's gone and we're starting from square one. The Whitecaps have pretty good odds of carving the Impact open for at least one goal, of course; in the second half against Montreal they could easily have made it 2-0 a couple times. I like Vancouver's odds but this is no sure thing.

Teitur Thordarson knows that, luckily. He seems to be making this match a priority and hopefully he'll be impressing onto his newer players the facts of this game: that just because Montreal is down does not mean they're out. How many times have the Whitecaps thought they had the Impact at a disadvantage over the years before giving it up? Quite a few times, including in last year's Voyageurs Cup. The last thing we need is for Vancouver to underestimate Montreal, or for Montreal to keep up the pace they started in Edmonton and starting piling in the goals.

Given the struggles from the Impact so far this year, I'd probably be far less concerned if not for that result in Edmonton. Even that reflected a struggling FC Edmonton team more than a resurgent Montreal one. But Edmonton's not that bad. If Montreal can put five goals past them, they can put one past us. And then who knows what might happen?

I'm sick of the Impact having it their way in Edmonton. Let's come out and thrash them.