So, do you think the Vancouver Whitecaps will play a game that counts this time?

I'm cautiously optimistic. Not just about the game counting: there's a good chance of rain in the forecast but here in Vancouver we're used to such things. But about the game in general. For my money, the Vancouver Whitecaps might be in their best form of the season. On the road against the New England Revolution they got far less than they deserved, then owned the hell out of Toronto FC at home despite only getting a 1-1 draw. They looked likely, though not certain, to win the second leg in Toronto before fate intervened. And while whipping Toronto isn't exactly the sure sign of a Major League Soccer contender (as I write this the Philadelphia Union just beat Toronto at BMO Field 6-2!), it's still awfully encouraging.

The New York Red Bulls are first place in the East. Even without Thierry Henry and Rafael Marquez, they look like intimidating opponents. But they could hardly be in a better position for Vancouver. The Whitecaps have had trouble finishing for the last month, but New York has been giving up gilt-edged scoring chances to all and sundry in recent weeks. New York has a dangerous offense but Henry has been doing most of the finishing for them lately. Dwayne De Rosario, to pick a name, has looked committed to the team but also like a shadow of the assassin he usually is.

The Red Bulls are sagging. The Whitecaps are looking strong. They're playing in Vancouver. Vancouver is doubtless tired from their midweek saga, but they had last Saturday off and might still have fresh enough legs. For once, the Whitecaps are also decidedly healthier than their opponents. The Red Bulls are a ferocious team who have gotten some immense results and knocked off some strong teams. But they're all vulnerable. I'm not saying the Whitecaps will take advantage and get their first win since First Kick, but I am saying they can.

The Vancouver Whitecaps starting eleven is marred by the expected absense of Jonathan Leathers. Leathers hurt his hamstring training for the Toronto FC match on Wednesday and wound up leaving the game at half despite looking fairly good. The substitution was at least a little precautionary, but sadly Leathers's injury is the one thing that hasn't been scrubbed from existence after that game. Therefore I expect Wes Knight to start at right back. The other injuries are nothing new: John Thorrington is still out with his never-ending quad problem and Atiba Harris continues to recover from knee surgery. I suspect Michael Nanchoff would be theoretically available for selection if Teitur Thordarson wanted him, but I expect Nanchoff to play tomorrow's Residency game in Abbotsford instead.

Other than that? Business as usual! I don't expect many if any changes; I'd like to see Mouloud Akloul get a shot at centre back for Greg Janicki, for example, but I'm definitely not betting on it. Camilo Sanvezzo (now once again wearing Sanvezzo on his back and therefore once again getting his last name in my articles) showed enough spirit and fire that I think Teitur Thordarson will keep the Brazilian in the starting lineup, even if I might wish he wouldn't. The smart money has to say that we'll stick with the same old 4-4-2 with most of the same personnel (poor Russell Teibert; Teitur's been conservative with young guns before but frankly he's got to find a way to work Canadian Soccer Jesus into the eleven). 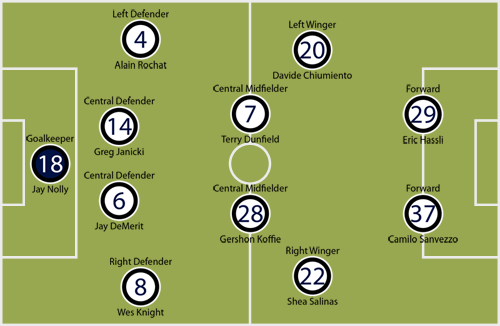 It doesn't sound great being without Leathers but the Red Bulls have it much worse. In addition to Henry and Marquez, fine veteran midfielder Mehdi Ballouchy is reportedly being left in New York due to visa problems. Welsh veteran Carl Robinson will miss the game through injury. American international Chris Albright would probably be New York's starting right back if he were healthy, but he's out due to hernia surgery. It makes "oh, no Jon Leathers" seem like a relatively minor problem.

So, missing two defenders, a fine central midfielder, and their best forward, is New York in trouble? Not really; they have loads of depth. Their second-best forward, former Notts County man Luke Rodgers, would be the best scorer on a lot of teams. Jan Gunnar Solli, the likely starter at right back, is a fine journeyman who I'd take in Vancouver in a heartbeat. And Canadian fans won't need an introduction to 29-year-old Roy Miller, who's been a nightmare for the Canadian national team more than once in the past as an automatic starter for Costa Rica.

But yes, I do think that Vancouver has a opportunity here. That defense has been in trouble in recent weeks. They've allowed seven goals in their last three games against utterly underwhelming opposition: when you allow a three-spot to Chivas USA at home, you're vulnerable. When you allow two to the Houston Dynamo on the road, you're in trouble (as Whitecaps fans could testify from experience). Meanwhile, the Whitecaps offense put up a hell of a fight against New England that should have gone far differently. They positively feasted on Toronto FC twice, even if their finishing let them down.

That's the question for Vancouver, isn't it? Finishing. Without Marquez, you can almost bet the farm that Vancouver will get opportunities. But can they put them away? Eric Hassli has shown indications that he's finding his scoring touch again: he's starting to assert himself a bit more physically, starting to try more of those chances that we know he should convert, and generally looking like the designated player striker we all hoped we were getting. But the consistency clearly isn't there for Hassli yet. Camilo Sanvezzo has left an awful lot of scoring chances on the table. The wingers, Davide Chiumiento and Shea Salinas, have been running like hell and getting open but not doing much with it.

If the team bangs the ball home a bit more reliably than they have in the past, they will win. I can almost promise it. I fully believe that the Whitecaps will at least play New York to a draw in the middle and that it'll come down to who converts better. With New York's defense being what it is, the Whitecaps should get better opportunities. We should have the advantage.

But it's no sure thing. This is why they play the games.