The Vancouver Whitecaps have two advantages going into this Voyageurs Cup decider against Toronto FC.

First, they know exactly what they have to do. If they lose, they... well, lose. If they draw 0-0 then they still lose, thanks to Maicon Santos's pesky away goal against the run of play at Empire Field. A 1-1 draw sends the affair to extra time, and anything better (be it a higher-scoring draw or a Whitecaps victory) gives Vancouver their first Voyageurs Cup in ten attempts.

They're also better rested. Vancouver hasn't kicked a ball in anger since last week's Voyageurs Cup match, while Toronto had a road game against the Colorado Rapids on Sunday. Toronto escaped with a very credible 0-0 draw and it wasn't exactly a bitterly-fought, high-intensity slugfest between the two teams. Still, that wear and tear and travel isn't exactly meaningless. It gives Vancouver a slight but real edge.

Everything else... everything else... is in Toronto's favour. They'll have their home crowd desperate for a trophy. They have the advantage of their home cooking and their familiar grass. They have the momentum after escaping with a 1-1 draw that they by no means deserved. And they have an opponent in the Whitecaps whose form on the road has been almost completely hapless. It's difficult to believe that the Whitecaps can pick up the three points in tonight's all-important championship game.

Then again, the Whitecaps have done some things that were hard to believe in the past. Maybe they can add one more.

Michael Boxall, Alexandre Morfaw, and Michael Nanchoff all played the Whitecaps Residency's Saturday game against the Victoria Highlanders and won't be available for this tilt. John Thorrington and his amazing paper body are still feebly trying to recover from what is apparently a catastrophic injury, whereas Atiba Harris is still getting over knee surgery. Philippe Davies would have played the Residency game but is fighting the sort of illness that makes it hard to keep down solid food, so he's out too (not that anybody would have expected to see him). There are also rumblings that Jonathan Leathers is looking less than one hundred percent, although it remains to be seen if that will impact him in any way.

So, when it comes to guessing the starting eleven, there are no real surprises. Therefore, I've decided to be conservative and predict the same starting eleven we saw last week. I desperately hope that Russell Teibert will return to the starting lineup and we'll go 4-2-3-1, but I certainly don't expect that to happen. I'd also like to see Omar Salgado up top instead of Camilo, who I believe in less and less with every passing week, but Teitur likes his thunder-and-lightning forward combinations. If Leathers is hurt, we'll of course see Wes Knight step in at right back but given Leathers's superior crossing I bet Leathers will go if he's at all healthy. 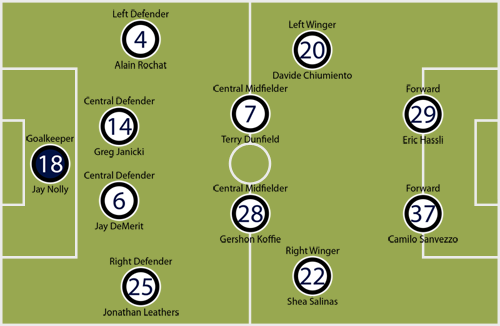 So, with this lineup, can the Whitecaps score the goals they need? They need at least one, obviously, but two would be much, much better.

First, some history. The Vancouver Whitecaps actually beat Toronto FC the first time they ever visited BMO Field in 2008, 1-0 on a Martin Nash penalty. Jay Nolly had one of the better games of his Whitecaps career as Toronto was unable to break down the Vancouver defense and pick up any sterling chances thanks to yeoman's effort in defense by Jeff Clarke and Steve Kindel. It was a proud night for Whitecaps fans (which I was not, particularly, at the time), although Toronto would argue they deserved at least a point. Since then, they've lost 1-0 in 2009 on a Kevin Harmse (!) third-minute goal and drew 0-0 at BMO last year in a game that meant nothing to either team. That's a 1-1-1 record for the second-division-era Whitecaps, which isn't bad but isn't quite inspiring either.

As we know, the Whitecaps have a lousy road record. So far this MLS regular season, they've played five road games. They've lost four. The one they didn't lose was a 0-0 draw in Chicago, and if they get a 0-0 draw tonight that's as good as a loss. The Whitecaps beat the Montreal Impact on the road, of course, but the Montreal Impact are currently in a state of undeclared civil war and the talented-on-paper team sits second-last in the North American Soccer League, just ahead of the truly hapless Atlanta Silverbacks. So I'm not sure I'd put "beating the Impact" on the 2011 highlight reel.

Is Toronto FC's form at home much better? Yes. At home this year Toronto has won twice, drawn four times, and lost once. Their 0-0 draw at home with the Los Angeles Galaxy would be enough to retain the Voyageurs Cup if they repeated the performance; they've also drawn 1-1 with Columbus and Chivas USA as well as 2-2 with the Chicago Fire (and I'd be just fine with them repeating that game). In seven games, they've three times posted scores that would be good enough to win the Cup, and twice more had results only good enough to send the game to penalties. These games were almost all against teams better than the Vancouver Whitecaps; most teams in this league are.

The game is also being refereed by Dave Gantar, my personal refereeing nemesis now that Benito Archundia is retired. Of course, having sent off Tony Tchani for a lame bit of post-goal celebration a few weeks ago, he's arguably Toronto FC's refereeing nemesis as well. Remember, Gantar isn't biased, he just sucks. I'm calling that a wash.

The odds are against us. I'm not just saying that to try and fire up some exciting underdog narrative. The odds truly are against us. The Whitecaps have a few very real advantages but they'll still have a hell of a job to do forcing Toronto to go down.

Now, you may say that if the Whitecaps play as well as they did in the first leg, they'll probably win. Of course, we didn't win the first leg playing as well as we did, so I'm not counting those chickens before they hatch. It's one thing to fire yourself up for a first leg in front of your raucous home crowd on the slightly idiosyncratic turf that you're used to and they're not; it's another thing to go into somebody else's building and put on the same show. In any case the Whitecaps will certainly need to finish better than they did in the first leg, where for all the billions of chances they racked up only Eric Hassli found the back of the goal. There's been a lot of pretty half-assed finishing from the Whitecaps lately. A bit of rest will help (accurate finishing is one of the most difficult soccer skills when you're tired), but the Whitecaps need at least one goal against Stefan Frei and probably need two. They better bloody well be cashing in their chances.