What? Oh, geez, you startled me! You, see, I didn't really expect anybody to be interested in this game. As I discussed, there probably won't be many fans at Empire Field for the game this evening. Those of us who are going are braced for an evening of soccer excitement that only we shall bear witness to.

Should be a good evening, though. Against all earlier expectations, today's forecast now calls for blue skies in Vancouver. The Whitecaps enjoy a comfortable lifetime record against Toronto FC, and since neither team is exactly in scintillating form at the moment we should have a good, competitive soccer game. Delightfully, both Toronto and Vancouver seem to be taking the Voyageurs Cup seriously. Teitur Thordarson actually rested key Whitecaps players so they'd be prepared for this game, while Aron Winter made a point of putting out a A- lineup in the second leg against FC Edmonton when he had the tie all-but-won.

At stake? Oh, not much. Our national soccer championship, the most important prize in the domestic game. A trip to the CONCACAF Champions League to take on the champion of Nicaragua, most likely Real Esteli, in the final round of group stage qualifying. The road to the FIFA Club World Cup and soccer immortality. To say nothing of an actual, physical trophy in our first season in Major League Soccer; something to keep the jackals from tearing this team to shreds for at least a little while.

I'm so excited. I'm so scared.

As ever, the Vancouver Whitecaps starting eleven is uneducated guesswork.

The questions on defense are minor but present. Michael Nanchoff has been cleared to play but I'd be stunned if he took a part in this game. John Thorrington and Atiba Harris are both still out long-term. Jonathan Leathers has apparently recovered from a minor hamstring tweak to the point where he's ready to play this game: on Saturday Wes Knight got his second start at right back but that seemed precautionary. Mouloud Akloul will probably partner Jay DeMerit in the middle, but there's always a chance that Greg Janicki makes an appearance. I hope not: the small, skilled Toronto attackers might have a bit of an easy time against the big, lumbering Janicki.

In midfield... Russell Teibert is healthy. Shea Salinas is healthy. Davide Chiumiento is healthy and rested after getting spot duty in New England. The time for the 4-4-1-1 (or a 4-2-3-1, as it seems to be in reality) is now. Actually. the Whitecaps sort of ran that formation most of the game against the Revolution, with Long Tan playing well back and interacting with the wingers more than forward Camilo. When the Whitecaps fell down 1-0, they geared into a more traditional 4-4-2 to go for offense. But anybody who says that Teitur has been sticking to the 4-4-2 without exception this year has been watching different games than me.

And at forward, the expectation is that Eric Hassli's hamstring is better and he'll be starting this game. My money (and my hope) says that Omar Salgado will be the second forward, if necessary, rather than Camilo. 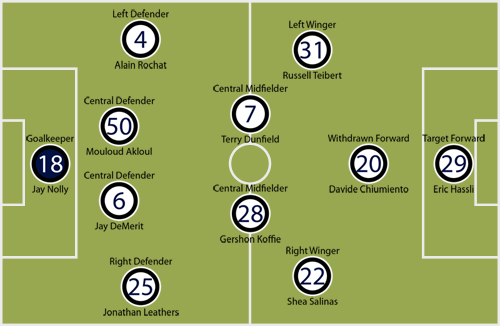 Toronto FC fans have been geared up for the young Ecuadorian talent Joao Plata. Plata is 19 years old and, at 5'3", is literally the same height as my mom. He is, however, a better technical player than my mom, and already has a couple fine MLS goals while electrifying BMO Field fans with his undeniable abilities. The trick with Plata will be to give him the same treatment centre backs have been giving to small young players since the end of time: don't fall for his bullshit, keep your eyes on the ball, and if he tries to skin you knock him on his ass. With some tough-tackling sons-of-bitches like Jay DeMerit, Mouloud Akloul, and Terry Dunfield around, the Whitecaps can hopefully neutralize Plata through a combination of brutality and simplicity.

Listen, nobody who's a neutral likes the idea of taking advantage of a player's small size by knocking him around a little. Even I, an unabashed Vancouver partisan, blush a little to say it. But sometimes that's the best way to deal with him. Plata is in that Davide Chiumiento/Russell Teibert level of skill that seems just a little too skilled for Major League Soccer, but he's smaller than either of them. In an annoying way that actually makes him more elusive, but it can also make him more vulnerable. The Whitecaps would be off their nuts not to take advantage of that.

I think Plata is a little overrated in the sense that most poor teams overrate young, exciting players: I fully believe he's fairly good and will get better but, let's face it, he's not one of the league's best. Personally, I'm more concerned about Maicon Santos, who is erratic and can be as dangerous to his own team as to his opponents but is also a fine scorer and a guy who can pick defenses apart when his head's on his shoulders. Maicon banged a well-taken brace past Rein Baart in the first leg of the Voyageurs Cup first round and has put better defenses than ours to the sword in his career.

I freely admit that I'm glad we won't be facing Dwayne De Rosario, traded to the New York Red Bulls weeks ago. But one of the guys they got back for him, Tony Tchani, is plenty dangerous as well. I liked the trade for Toronto almost just because I like Tchani, a fine young player with MLS experience as well as a very tempting combination of skill and physicality. Tchani is raw and hasn't taken over many Toronto games on his own yet, but he's also excellent on a number of levels.

It comes down to the Whitecaps defense and midfield. I trust Eric Hassli; if he gets the ball he'll do his job. But will the defense hold off Toronto's attack, which has the potential to do us some real harm? And will we win the midfield battle? I don't have answers to either of those questions. In my book Vancouver's the favourite... but it could go either way. And if we lose, then the Voyageurs Cup is all but out of our grasp.