Come back in time five weeks with me. It is April 6, 2011. The Vancouver Whitecaps are invincible lords of all they survey, having beaten Toronto FC 4-2 and had the comeback draw of the season against Sporting Kansas City in their two previous home games. A little team from some crappy throwball stadium named the New England Revolution is in town. Also in town is a certain referee, a referee whose name I have undertaken never to repeat on this site in a quixotic bid to rob the publicity hog of the attention he so desperately seeks. Anyway, this guy sends off two Vancouver Whitecaps and one New Englander in a game where Eric Hassli famously took off his shirt after scoring a penalty while riding a yellow card. The result was a 1-1 final that Vancouver was winning until the very death of the game, tenaciously clinging to their lead against heavy odds until it all went to hell.

Since then, it's just gotten worse. The Whitecaps have no wins, three losses, and three draws in the ensuing six league matches. Not that the Revolution are kicking ass: they've lost three times, drawn once, and won at home against lowly Sporting Kansas City. Both New England and Vancouver also enjoyed a win in national cup play against D.C. United and the Montreal Impact, respectively. These are two teams on the down swing. The good news for the Whitecaps is that they're at least drawing games; the good news for the Revolution is that they did win one.

This promises to be a game between two teams starving for a win. Naturally, neither of them will probably get one. The Revolution don't have that much firepower and the Whitecaps just aren't in a position to win.

Picking the Vancouver Whitecaps' starting eleven is a tricky exercise this week. Eric Hassli is confirmed out with a strained hamstring he suffered in the second half against San Jose on Wednesday, and Alain Rochat is known to be getting an extremely well-deserved night off. There are questions around the status of Russell Teibert: some dirtbag from the Montreal Impact stepped on his foot a couple of weeks ago and since then he's struggled with both an injured toe and trying to get back into shape. He might start (he had a fairly useful cameo as a substitute on Wednesday), but it wouldn't surprise me if Teitur Thordarson decided to save Teibert for the Voyageurs Cup. I've chosen to leave him out of my lineup and be pleasantly surprised if the starts rather than putting him in my lineup and be disappointed if he's on the bench.

If Teibert's out, then Teitur would obviously have to stick with 4-4-2. Notwithstanding Davide Chiumiento's whining, we're clearly better off with Chiumiento on the left wing in a 4-4-2 than Chiumiento in the middle of a 4-5-1 and Nizar Khalfan on the left wing. I'm also choosing to assume that Jay DeMerit is getting the start based on Teitur's history: if he's bringing a centre back in as a substitute, that means he thinks that centre back is almost ready. Besides, DeMerit looked very useful against San Jose and Greg Janicki could use the night off. 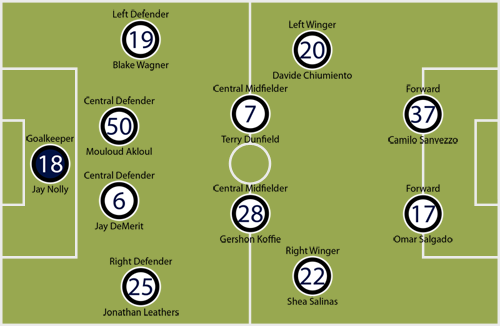 Obviously, this team isn't in great shape right now. I'm irritated as always by the sight of Blake Wagner, who has totally failed to impress. I know Bilal Duckett isn't great, but we've seen plenty of evidence that Wagner is a bit overwhelmed on this team. Whitecaps fullbacks have to carry a heavy load because none of our wingers can defend worth a damn. That puts a lot of pressure on Wagner, who will need to cover for either Chiumiento or Teibert and either way will probably have a lot of work to do. New England's attack isn't frightening, but led by the veteran midfielder Shalrie Joseph, you have to at least take them seriously.

This isn't strictly germane to the game day thread, but I was at the Whitecaps Residency game yesterday and enjoyed watching the kids romp to an easier-than-the-score-looks 2-1 victory over the Abbotsford Mariners. 20-year-old La'Vere Corbin-Ong got the start at left back and, basically, looked like a mirror image of a young Jonathan Leathers: he'd run up the wing, try to sling in crosses and make offense, but he'd also get back in time to cover his defensive responsibilities. He's a pretty big guy and tackles well. Corbin-Ong isn't great or anything, but he's got to offer more than Blake Wagner. At the very least he's younger and more promising so we might be building for the future. I'd certainly rather see Corbin-Ong going at left back than Wagner, ten times out of ten.

As for the rest of the lineup, well, it's hit and miss. Omar Salgado is as obviously unready to start in Major League Soccer as is obviously a great talent who'll be piling in goals someday. His effectiveness will depend entirely on what New England gives him. Camilo has been all smoke and no fire for weeks now, and his act of "run through opposing territory, take the ball nowhere where it'll do any good, then fall over" is wearing thin. It's doubly obnoxious because, with his high-impact and high-speed style, Camilo actually is the victim of a hefty number of fouls, some of which ought to have been penalties. Unfortunately, Camilo has a reputation as a diver (and he does go over too easily sometimes), which means he isn't getting the benefit of the doubt from easily-influenced referees. He's running a risk of serious injury with seemingly no chance of a reward. If the guy just used his skills and his nice shot to hold the ball up or go for goal instead of futzing around, he'd be a lot better off.

I can't imagine there are many, if any, goals in this game for the Whitecaps. So can they hold the Revolution off and escape with a 0-0 draw? It depends. If Jay DeMerit starts, it depends on whether he can keep the form he showed against San Jose up for ninety minutes. It depends on if Mouloud Akloul (or Greg Janicki) has the legs to keep going after injury and a high work load, and it depends on whether Jonathan Leathers has quite recovered from the fatigue and the leg problem that kept him out of the lineup on Wednesday. It also depends on the central midfield, which practically gave the game away in a very well-played match against San Jose: hopefully Gershon Koffie will steady the ship, but Terry Dunfield better get his act together.

I don't see much more than a 0-0 draw in the cards for the Whitecaps and we might well get less than that. I'd actually be satisfied with that, but unfortunately it won't keep the Vancouver wolves from continuing to circle the Whitecaps howling for blood.