The New England Revolution are a mediocre team pretending to be a good one.

If you're like me, you're probably overrating the Revolution a bit. You think they're okay because, well, they usually are. There've been a couple bad years in there but generally New England's in the mix for the playoffs. And they have a pretty decent, although unremarkable, record, and they've scored some goals and they haven't conceded too many. Undefeated three games in, which isn't exactly going to put the fear of god into you but still.

Smoke and mirrors, my friends. Smoke and mirrors. I don't care that two-thirds of the Vancouver Whitecaps apparently have some wasting disease turning them into injury-prone gimp people, the Revolution are vulnerable. They're sitting in Vancouver right now, complacent, doe-eyed, chewing on the grass in the field, and we have a big gun. We can get this one. Make it win number two, put the league on notice (as the cliche goes) that we not merely "not bad", we're actually pretty good.

So who's going to start in this game for the Whitecaps. I really don't know. It's not just that we have a number of injured players, it's that their status is so ambiguous. Is Davide Chiumiento fine? Is Jay DeMerit able to give us ninety minutes? Will Joe Cannon finally stop limping around on that bum ankle and start starting into goal batting shots aside like the rich man's Petr Cech we all know he is? If neither Janicki nor DeMerit are available, will Teitur Thordarson slide Rochat to centre back again or start Kevin Harmse? If Rochat moves over, will the left back be Blake Wagner or Bilal Duckett? The Whitecaps post an expected starting lineup a couple days before the game but that's even more fictional than their injury reports are. So, as ever, this is my own slightly-educated guess which is virtually certain to have at least two things wrong with it. 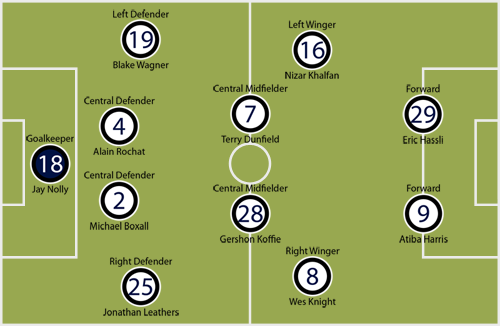 Part of the reason I give the Whitecaps an edge is a strategically advantageous injury situation. New England isn't the healthiest team either, and apparently a number of key players haven't even made the trip to the coast. The most important of these is goalkeeper Matt Reis, a hefty bald 36-year-old whose absence will make the game just a bit less special for the heckling sections of the Vancouver crowd. Reis joined the team in 2003 and has been New England's starter more-or-less uninterruptedly since 2004, apart from the beginning of 2010 when the job was held by the even older, even bigger, and even more badly-injured Preston Burpo. As you might imagine, his injury is good news for the Whitecaps: expected starter Bobby Shuttleworth has played all of three regular season MLS games in two-and-a-bit seasons.

I've never seen Shuttleworth play (understandable, since he barely ever has) so I don't have a scouting report for you. What I do have is a hefty dose of hope. New England is also missing a batch of defensive players, although nobody particularly key. Ousmane Dabo is the biggest name, but the former Lazio man hasn't yet established himself on the field with New England. Franco Coria is promising, but he's twenty-two and inexperienced. Still, it affects New England's depth badly, and we Whitecaps fans can tell you all about that.

Meanwhile, Vancouver suddenly has a surplus of attacking options with which to overwhelm the undermanned Revolution. Even without Omar Salgado in town, Atiba Harris, Eric Hassli, and Camilo Sanvezzo have two goals each, an eye for the twine, and an unwillingness to take any guff from some 24-year-old career backup goalkeeper. If Chiumiento can play, or the Whitecaps leased a teleporter that got Russell Teibert back to Vancouver in time for a nap and a shower, then the offensive picture looks even better.

The New England Revolution have, so far, conceded one goal per game. Those games were at the Los Angeles Galaxy and at home to D.C. United and the Portland Timbers. Full marks to New England for getting a 1-1 draw in Los Angeles, but the two home games against D.C. and Portland weren't exactly uplifting. The 2-1 victory over D.C. came despite D.C. having the bulk of the scoring chances and with more than a little luck on New England's side. The 1-1 draw with the Timbers may have been even worse, and we can't forget that neither D.C. United nor Portland are exactly world-beaters. Indeed, at this stage of the season most observers would be flabbergasted just to see them get into the playoffs. Yet New England struggled, and struggled badly, in two home games against those minnows in which they were very lucky to get four of a possible six points.

Since their game in Foxborough on Saturday, the New England Revolution flew from the east coast to the west for this mid-week tilt, losing three hours in time zones. The Vancouver Whitecaps, obviously, could stay home. Both teams are injured, but the New England injuries are a little more crucial. New England has the better record but Vancouver has the more difficult schedule and, arguably, the better performances. These are two teams that, facing each other on fair terms, would be equally matched. But these aren't fair terms, and every little thing that can decide the result of a close soccer game is tilting the Vancouver Whitecaps' way.