The Columbus Crew are a mid-range Major League Soccer team. A pretty decent side with good, fundamental defense even if they lack scoring pop. Their motto is "America's Hardest Working Team", and while that slightly overstates it it's true that they're a gritty bunch of guys who are more likely to get a 0-0 draw or a 1-0 win than put on any Empire Field-style football excitement.

Their record is mediocre but not bad, exactly. They have a few decent players and a couple names you'd recognize but nobody who ought to blow the doors off. They're a simple, decent, quiet responsible team. All in all, they have a lot in common with the other teams that the Whitecaps have been playing against (and losing to) for the last month. Scrappy, only a little talented, easily underestimated. Then the Whitecaps come back mumbling and shaking their heads while moron editorialists like me write 1,200-word articles on how it's not really their fault. It's becoming a bit of a trend.

Of course, in this case, it's not really their fault. The Columbus Crew seem like a beatable team: unremarkable at most positions and their areas of strength aren't in places where they might be able to overwhelm the Whitecaps. Moreover, Vancouver is slowly but surely getting healthy. It's taken a disconcertingly long time but Vancouver is finally getting into a position where we can start looking at them to win these games.

Columbus is a tough test and the Crew have to be favourites in this one. But that doesn't mean three points aren't there for the Whitecaps.

With the number of Vancouver Whitecaps players beginning to return from injury, I have a good problem when it comes to predicting the starting lineup: there are too many options! Shea Salinas has already made his first appearance, Mouloud Akloul is looking good, Greg Janicki could return at any time... the Whitecaps could field any of a half-dozen different elevens without surprising anybody.

The biggest question is up top. Eric Hassli is suspended for yellow card accumulation and Atiba Harris is recovering from knee surgery, leaving Teitur Thordarson without his beloved big man at forward. Marc Weber has predicted that Nizar Khalfan will start at forward and I'm inclined to agree. The Whitecaps seem almost comically afraid of rushing Omar Salgado into action and, while the 5'8" Khalfan is nobody's idea of a big target man, he's played forward for Teitur Thordarson before in the 2010 season. I thought his results up top were mixed but he did put in the occasional goal. Long Tan is an outside possibility to get a starting position but, well, he's Long Tan. I wouldn't be surprised if Khalfan was on a bit of a short leash, though, and hopefully we'll see more Salgado rather than less.

Of course, this starting lineup business involves more than a bit of palmreading. I can always hope that Thordarson will start Salgado instead of Khalfan and put Mouloud Akloul in central defense, moving Alain Rochat to left back and Blake Wagner to the bench. But I'm not ready to bet on that quite yet. 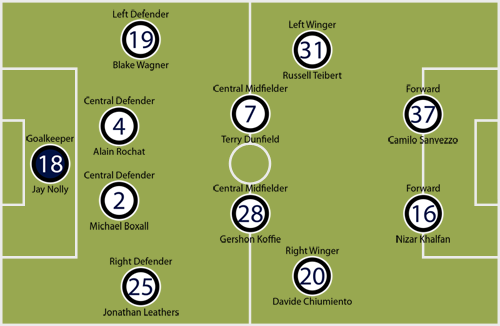 The bright side of playing the Crew is that they're relatively light on scoring threats. Even their team scoring is of a fairly low magnitude: if this turns into a goal-scorer's slugging match, Vancouver should be able to come out on top. Moreover, the low calibre of Columbus's forwards should prove a valuable respite for the Whitecaps defenders, who have looked almost overwhelmed at times against first-class opposing scorers.

By far the most important part of Columbus's offense is midfielder Robbie Rogers. Virtually no scoring chance for the Crew doesn't go through Rogers in one way or another: he's their leading scorer, their best distributor, their most talented man on the ball, alternatively playing another man through and just when you think he can't do it himself thundering down the field to create his own chance... a positive chiaroscuro of offensive possibilities. The twenty-three year old is already a thirteen-time American international and has earned every single one. The Whitecaps would do very, very well to be wary of young Rogers and his talents.

But the good news is that Rogers is almost Columbus's only real threat. Jeff Cunningham is a big name who will be familiar to many of my readers, but at 33 years old his best scoring days are long behind him and he's mostly been used, ineffectively, off the bench so far this season. Emilio Renteria is a decent scorer but a journeyman at best, and the rest is a bunch of callow youths, largely useless veterans, and players who would barely put fear in the hearts of a USL PRO team. No wonder they score so infrequently this year; they just haven't got the talent.

You know what that means? Good news for Michael Boxall and Blake Wagner. I'm an outspoken Boxall fan. I think he has great potential and considerable gifts already: he's smart, quickly learning, and an utterly superior player in the air. But there's no doubt he's inexperienced and a trifle slow, and that's caused him problems against skilled, slippery forwards. As for Wagner, well, he has his good qualities but he reacts poorly to pressure. Hopefully, the mediocre Crew forwards won't be able to put much pressure on them. It'll be up to our midfield to stop theirs, and with a healthy Dunfield and a somehow-not-suspended Koffie, the Whitecaps should have at least a puncher's chance of neutralizing Rogers and his cohorts.

Then it's just up to the Whitecaps to score some goals. A healthy Russell Teibert can make all the difference, as we saw against Montreal. If Davide Chiumiento is on form they'll be able to put plenty of pressure on the Crew. But Columbus has quite a good defense and some strong goaltending in the form of Will Hesmer; it's the back end that's been winning Columbus games so far this season. Meanwhile, very quietly, the Vancouver forwards have had some slight trouble putting the ball in the back of the net. Hassli last scored against New England in that ill-fated celebratory moment and Camilo's last tally was against the Houston Dynamo twenty days ago. Since then the goals have been coming out of the midfield (and, once, the defense). With Hassli out, the attack is always less dangerous than it could have been.

So what can Camilo (and Khalfan, and Salgado...) do against the strong Columbus back four? The Crew have some very neat defenders, including veteran Julius James and captain Chad Marshall. Chilean journeyman Sebastian Miranda is fitting right in during his first MLS season. But, Miranda aside, most of the Crew regulars are big and a little bit slow. If Camilo's on his game, he might be able to make room between them and his slipperiness could cause the defense big problems (remember how he speedbagged Andrew Boyens of Chivas USA in spite of not scoring a goal?). But that's if Camilo's on his game, and if he has sufficient support from the other forward.

Ultimately, it's going to be up to Vancouver's midfield to win this one. Man for man, Vancouver has a better midfield corps than all of the Crew except for Rogers. Win the battle in midfield and they'll probably win the game. But with Columbus's depth at the back, and Vancouver's fatigue from playing in Stade Saputo on Wednesday, it remains to be seen if the Whitecaps can come out firing on all cylinders.