I'm not going to launch into a routine about how this is a must-win, how pressure is on the Whitecaps to get results at home, and so on. I would have said all those things, but what's the point? I said 'em all last week and we didn't get a result then. And yet we still find ourselves in more-or-less the same situation, still trying to do and convince ourselves the alternative is "die".

More and more, as injuries deprive the Vancouver Whitecaps of their old flare, I'm realizing that there isn't really much pressure on them. Every knowledgeable soccer fan in this city knew better than to predict a playoff berth at the end of this season, and even the casual fans are smart enough that they're not expecting anything more than credibility, excitement, and a good time at the stadium. Well, even at their worst, the Whitecaps have been credible, and they've had enough excitement so far this season to account for three years.

Is it still the honeymoon effect; we're still so unused to the novelty of the whole experience that we'll cheer no matter how lousy this team is? Or is it simple wisdom. Knowing how bruised and battered we are, how young some of our core players are, and how much work this team still has to do in order to gel as a unit, a record of one win, two losses, and three draws is actually quite respectable.

As ever, the projected starting eleven for the Whitecaps this week is a hefty dose of guesswork. Terry Dunfield is said to be ready to return, so I'm going ahead and putting Dunfield in the starting lineup at central midfield. In my imagination, Dunfield is replacing Kevin Harmse, whose fitness is questionable and slumped hard towards the end of the Chivas USA game; I think both Teitur and I are more comfortable seeing Harmse off the bench. Other than that, I'm pretty much going with what we did last week. I really would like to see Teitur Thordarson change his formation up a little; play Davide Chiumiento up as sort of an advanced playmaker/withdrawn forward, give our attacking game a little more bite. But I know better than to assume Teitur is going to do that. 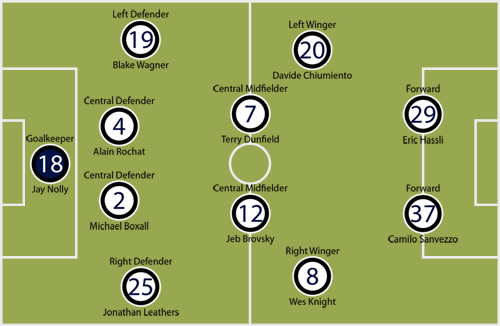 As for Dallas themselves, well, the reigning MLS Cup runners-up are having a rough start to the season. They're scoring decently, particularly thanks to veteran attacking midfielder David Ferreira and his three goals. But they're conceding at almost a Whitecaps-esque pace, having let eight goals in five games past former United States international goalkeeper Kevin Hartmann.

It's a bit of a surprise, Dallas's rough start, since they haven't lost too many key pieces from last year. Jeff Cunningham is gone, not that scoring's been their problem. Dario Sala retired but in his last year he wasn't much of a contributor anyway. Likewise the Argentine Pablo Ricchetti; you can find ten midfielders better than the 34-year-old Ricchetti in the NASL if you want to. Midfielder Dax McCarty is a serious loss, but McCarty plus a bunch of journeymen don't add up to an MLS Finals team turning into a contender for the Wooden Spoon. Even their injury situation isn't that serious: defenders Kyle Davies and Edson Edward are both out long-term but neither is a key player (although Davies has loads of promise).

So what the hell happened that kept their offense relatively strong but turned their defense into a shambling wreck? I don't know. Actually, I'm not sure anything did happen. We're still early in the season and bad luck can make a big difference in the standings. Dallas has a few rough losses: a 3-2 loss to the Portland Timbers at Jello Park that saw Dallas fall down 3-0 early but come roaring almost all the way back. A loss in Columbus that they'll feel they could have gotten more out of and a 2-0 loss at home to the San Jose Earthquakes. A couple weeks ago, Dallas pasted the Colorado Rapids 3-0 on a brace from Ferreira and one from could-have-been-Canadian Ugo Ihemelu. So this team can win games regardless of what their record says.

So, even as the Whitecaps slowly nurse their way back to health, they must be very careful. FC Dallas is legitimate. They are for real, notwithstanding their lousy record. If the Whitecaps come out a little too loose, thinking that this is at least one easy point, they'll learn the lesson Colorado learned. They'll have to bear down and go hard; harder than they did against Chivas, anyway. Hopefully Teitur Thordarson has done his homework and can prevent last week's thorough outcoaching which made Vancouver's job all the more difficult. There are no easy games in Major League Soccer; that might be this league's best feature. The joy of parity is that you can take nothing for granted, but at the same time even the worst team always has a chance to win (well, unless they're playing Real Salt Lake).

FC Dallas is beatable. But they're also a sleeping tiger, ready to pounce out of the reeds and devour a helpless antelope. I'd be stunned not to see them back in contention by the end of the year. The Whitecaps had best make sure they don't bust Dallas's slump for them.