Contrary to what you may guess, I have no particular feelings about Sporting Kansas City. No, really!

I mean, okay. So I just wrote an article titled "Ninety Minutes Hate" about booing one of their strikers. And way the hell back in January I scored the name "Sporting Kansas City" second-worst in all of Major League Soccer. But I don't really have anything against the ol' Wiz. Their new stadium looks lovely. They've had a charming, workmanlike team (apart from that one asshole) which is on the way up. They have big, quirky Danish guy in goal. They have a guy named "Aiyegbusi". They had Jimmy Conrad for all those seasons, and I really liked Jimmy Conrad; MLS champion of "Guys I Wanted On My Team Out of All Proportion to Their Actual Abilities" from 2006 to 2010. And, frankly, playing in Kansas City just makes me like you more to begin with. Kansas City, Kansas is a scrappy little town, overshadowed by its big brother across the river with the identical name but I don't care.

When I look at Sporting Kansas City, it is with affection. They're probably the most inherently likable team in MLS. What a shame that I have to greet their arrival in our fair city with a cacophony of booing and abuse, and what a pity that we must hope the mangled, horrifyingly depleted Whitecaps must grind Kansas City's nose into the dirt and win this game in the alley (because they sure haven't got the skill to win it on the field).

The Whitecaps have lost another two players from last week's starting lineup, which is pretty extraordinary when you think about it: only Jonathan Leathers, Alain Rochat, Terry Dunfield, Gershon Koffie, and Atiba Harris remain from the starting eleven which thumped Toronto FC just two weeks ago. So as you might expect, the projected starting eleven is a lot of guesswork. Jay Nolly is supposedly fir again and, indeed, the Whitecaps pre-game card has Nolly starting, but I'm giving Joe Cannon the nod on superior health and a great game against Philadelphia. Jay DeMerit injured his groin on international duty with the Americans, and while he's listed as "questionable" I'm expecting Michael Boxall to go at centre back. Russell Teibert is off on international duty with the Canadian U-20s, which isn't in doubt: what is in doubt is who'll replace him at left wing, and I picked Blake Wagner for the job. Finally, as for Eric Hassli's replacement due to his careless suspension, well, Teitur Thordarson has preferred Camilo Sanvezzo to Long Tan so far and who am I to argue? 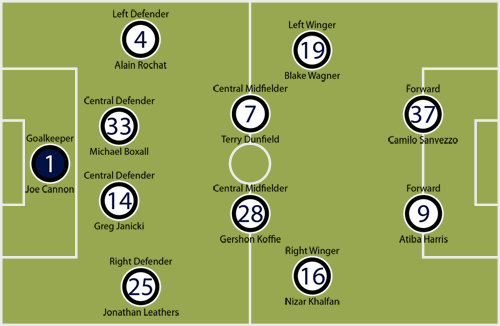 There is no skill in that lineup. It's almost shocking. Nizar Khalfan's all right when he's on form, but that's not often enough. Alain Rochat is fine, and I'm increasingly of the opinion that Jonathan Leathers is limited but also capable enough to get by. Gershon Koffie showed flashes of talent last year, though this year he's kept it very simple and done most of his work around the centre circle. Terry Dunfield passes quite well and can get the job done with the ball at his feet, and in theory Camilo Sanvezzo is a skilled forward. But there's a lot of qualifications in what I just wrote, and beyond those guys this is a team of cementheads. Would you trust Michael Boxall to pass his way out of a paper bag? How about Atiba Harris? He couldn't get past the defenders in Philadelphia, and he couldn't get anything going against Toronto unless it was handed to him on a gilt-edged plate; what makes you think he'll be any different against Kansas City?

Sporting themselves aren't in great shape. They're missing a few players injured and, most glaringly, designated player/forward Omar Bravo is missing due to suspension. They, too, are coming off a road loss, but a rather more vigorous one than the Whitecaps mustered. Kansas City lost 3-2 in Chicago in a rollicking shootout: Bravo took a red card for pulling down Gaston Puerari in the area in the 34th minute, with Diego Chaves putting away the penalty. Chicago soon went up 2-0 thanks to a Puerari goal, but Kansas City kept fighting. Defender Matt Besler capitalized on a mistake to score for Kansas City, and though a lovely goal from Marco Pappa put Chicago in front 3-1 the game still wasn't over. Ten-men Kansas City got another goal through some cocksucker, but that was as close as they got.

Still, they showed a lot more fight on the road than Vancouver did. They're healthier than Vancouver, even without Bravo they're more experienced. This isn't Toronto FC redux: Sporting Kansas City is nobody's idea of an MLS Cup favourite but they're legit. More legit than a Vancouver team with as many players in the hospital as on the field, anyway.

So where does that leave us? Sporting Kansas City is a dynamic offensive bunch, even without Bravo. Captain Davy Arnaud has been picking up goals and setting guys up in Kansas City for almost a decade. Sierra Leone international Kei Kamara's got a useful touch around goal, knocking in eleven goals so far in his Kansas City career. 22-year-old SuperDraft pick C.J. Sapong is a promising player who scored for Kansas City in their opener, and big veteran midfielder Birahim Diop somehow bagged five goals last year. Vancouver's defense isn't in bad shape with Rochat, Boxall, Janicki, and Leathers all happy and healthy, but they'll still have their hands full.

So far, Kansas City's been relatively weak this season defensively. So what will the Whitecaps be able to muster against that supposed weak spot? Er, probably not much, unless Camilo comes out of his shell, we get a rare visit from Good Nizar Khalfan, or Atiba Harris finally gets his scoring boots out of the lockerroom. Maybe Alain Rochat, who for all his talent has definitely played a bit within himself, can flick the switch of his confidence, rampage up the field, fake out three guys, and put the ball in himself. That would be nice. I don't mind saying that the likes of Matt Besler, Michael Harrington, and Chance Myers don't actually scare the life out of me. Some of Kansas City's defensive players are decent, or have potential, but there isn't a heaping spoonful of talent back there.

Won't matter. I can't see the Whitecaps getting through them; there's just no firepower left. The cupboard has been scraped bare. Unless, of course, those unproven players suddenly prove a whole lot. I won't be holding my breath.