So. Who the heck are the Houston Dynamo?

I don't mean in a "is-this-the-Carolina-Railhawks" sense. I mean on the strictly local level. Who the heck is this team that's come out of the gate with just two draws out of three matches, is currently sitting last in the Eastern Conference, yet by all accounts has some pretty talented players and bright prospects, including a 25-year-old goalkeeper who may have stolen Pat Onstad's job but has attained borderline memetic legend status among the Dynamo faithful?

Surely the Dynamo aren't as bad as their record indicates. They have some legitimately decent players, some nice veterans, a couple players who've scored some goals in their time (not withstanding the fact that the Dynamo have scored twice all season). They can't be as bad as the numbers make them look. They just can't be. There's too much talent there, too much experience combined with too much vigorous, promising youth. It has to be a charade, bad luck to some extent. At some point this team's performance is surely going to normalize.

As is obligatory at the beginning of these game day threads, I must now try to figure out the Whitecaps' starting eleven. I'm not sure how you expect me to pull that off, frankly. I don't think even Teitur Thordarson could predict Vancouver's starting eleven at this stage, but, well, I made the mistake of making this a recurring feature and I guess I'm the one who has to live with it.

So let me see. Jay Nolly in goal is obvious. I think Jay DeMerit is likely to start; partially because there are hardly many others who can do it, partially because DeMerit will want to, partially because he's actually had a fair bit of time to recovery from that groin strain, but mostly because I can't imagine Thordarson would have had DeMerit risk making the trip if he didn't plan to use the hell out of the guy. That moves Alain Rochat to left back, where hopefully he can compensate for a lack of mobility in the centre.

I think Davide Chiumiento might go into central midfield. I know we're all happier seeing Chiumiento taking a more attacking role, like on the wing. But Chiumiento played centrally in Switzerland and he at least knows his way around the position. It's not like we have a lot of other options; Nizar Khalfan is the only other candidate and I suspect he'd be an even worse choice. There's also some pimping for Alain Rochat, but see below for what I think of that. 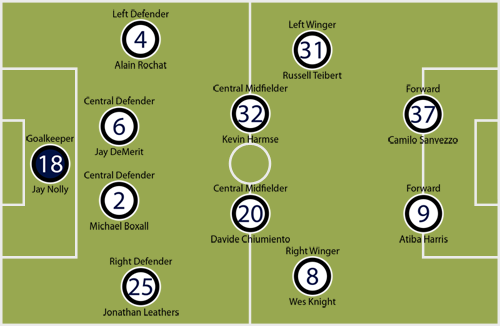 What a weird bunch. I reflected Teitur's usual 4-2-2-2 in my diagram but with these personnel I think I'd be happiest with a diamond 4-4-2: Harmse back playing a holding role, Chiumiento up front as an attacking central midfielder, with Teibert and Knight (neither of whom are exactly slow) running up and down the wings a bit further back than usual. This would expose Teibert defensively on the left, but I'd rather Teibert get in trouble on a flank than Chiumiento get in trouble down the middle. Really, there's no way to make that midfield look pretty. It's just impossible. I can't even blame the Whitecaps for not signing enough depth; we're missing five central midfielders in our fifth game of the season. Come on!

There have been suggestions that, if DeMerit is healthy, Alain Rochat should move up to central midfield. But given that even a healthy Michael Boxall isn't the quickest thing on two legs and DeMerit probably isn't 100%, it would be smart to leave Rochat at left back to steady the defense. My dream "guy who isn't a central midfielder really but could probably play the position" is Wes Knight: quick, good defensively, some playmaking ability, he checks a lot of boxes. The problem is that, as a natural right-sided player, he'll probably wander out of position. Of course, so will Chiumiento or Khalfan. It won't happen so I'm not predicting it, but if I were coach I might switch #8 and #20 on that diagram up there.

The Houston Dynamo aren't the healthiest team in the world either. Even if Brad Davis gets into the lineup, they're missing Brian Ching and Jermaine Taylor among their core players. Still. They have nothing on the Whitecaps, who I believe may be practicing in the morgue these days. This gives Houston a key advantage, and the last thing they need is more advantages.

You see, the Dynamo aren't that bad. They boast fine players in midfield like Davis, Geoff Cameron, and experienced-but-young winger Corey Ashe. Their defense also has some useful parts, featuring Andre Hainault and veteran Eddie Robinson. This isn't a great team, probably not a playoff team. But they're not going to stay last in the east for the entire season. There's enough talent in Houston's starting lineup to, for example, take advantage of a home game against an expansion team featuring most of its starting lineup and that just played a rough, exhausting mid-week game on the other side of the continent.

It's an axiom that road teams have a tough time in Major League Soccer. As axioms go, I think it's a somewhat overstated one. But there's no question that it's more tiresome to fly commercial from Canada to the United States than it is to fly around, say, Luxembourg. The trip between Vancouver and Houston is one of the longer journeys in the league and, coming off that midweek game, it's an awful lot to ask of Vancouver.

Of course, that aforementioned midweek game was an awful lot to ask of the New England Revolution and they did all right. In fact, they kept their legs better than the Whitecaps did; though Vancouver's only having nine players on the field obviously had something to do with that, it's just one more example of what we all know. Travel matters, but it doesn't matter that much. If a team's in decent shape, trains hard, and knows what to expect, they'll be able to handle distant road games like this. "Oh, road games in MLS are so hard!" is an excuse often used by fans of mediocre teams trying to justify their mediocrity; it doesn't make it true.

On skill, the Whitecaps should be able to beat the Dynamo. Vancouver hasn't got all of their skill in the lineup but still, the likes of Teibert, Chiumiento, and Rochat are a lot for any defense to handle. Meanwhile, if DeMerit's groin isn't bothering him too much and Akloul is fit enough to be effective off the bench, Vancouver's back four is in fairly good shape. So I predict a Whitecaps win by the score of 2-1: if there's one thing we know about Teitur Thordarson's teams, it's that they always come to their games prepared and fit. I think the Whitecaps might be about to do a number on the fabled MLS "home field advantage".

Of course, if I'm wrong, I'll just say the injuries were too much. Excuses are awesome.

My biggest concern is the offense. Atiba Harris has a growing fan club, but I am not yet a member. He's riding two goals for the season and is tied for the team lead in assists, which is impressive. Moreover, I don't deny he has some good qualities. But his old bugbears are still there: poor finishing, worse first touch, erratic positioning. Remember, he had a couple fine opportunities to get us a second, winning goal against New England and he blew them. That's life with Atiba Harris. Whatever a "natural goal scorer" is, Harris ain't it.

And what makes me so angry is that we refuse to try him on the wing! Huh?! He's a relatively quick big man who can't finish, gets offside too often, but has good passing abilities and decent ball control if he ever manages to get the thing corralled at his feet, we have a bunch of injured wingers, and Harris hasn't even gotten the chance at his natural position. This week I can understand playing Harris up top with Hassli gone. Long-term, I know many of you are going to disagree with me but I don't think he's the solution. His most valuable attributes are minimized and his biggest weaknesses are at their most glaring. And yet he'll have to carry a lot of the mail against Houston, and against some guys (I hate to say "like Andre Hainault" again but, well, like Andre Hainault) who can play rough when the need arises.

Of course, if we get the Camilo Sanvezzo we saw against Kansas City and in spurts against New England, we won't have a problem. Say what you will about Sanvezzo; that he's a diver (he is), that he gets muscled off the ball too easily (not true, I think, but I can see why you'd say so), that he hasn't quite figured out MLS speed yet (unequivocally correct but quickly improving). When he's on his game, he opens up a lot of space for Harris and makes Atiba's life much easier. Lack of a first touch isn't such a problem when both central defenders are keying on Sanvezzo. They are, somehow, a pretty effective strike partnership, even if I still think Hassli - Sanvezzo might be so awesome it would destroy the universe.

I'm sticking by my prediction of a Vancouver win. But this game could seriously go either way.