Oh, the lowly Philadelphia Union. This should be an easy one. They're just one year removed from being an expansion team so you know they suck. I mean, look at the number we just did on Toronto FC, and they're much much older!

(If only that were true.)

In reality, the Union are going to be a legitimate opponent; much more dangerous than Toronto has ever been. It's become a cliche to refer to the "new-look Union" but the truth is that they added a few real international talents to go with a collection of promising youngsters and MLS journeymen. They might not be a playoff team this year, but they're certainly going to give it their all. Actually, they're almost a doppelganger for this year's Vancouver Whitecaps, except they grab their players from South America rather than Switzerland.

Meanwhile, you know that PPE Park, one of the most exciting venues in the league, will be swaying with support for the hometown Union. The Whitecaps have been eviscerated by injuries and international duty and are probably this close to dressing Tim Regan and Rick Titus. Every advantage seems to be leaning Philadelphia's way.

The one bright spot is that both of these teams are so re-designed that we don't really know what they're capable of. Maybe the Whitecaps have a second gear they've yet to reach. But more likely we're looking at our first loss of the 2011 season.

I've tried to guess Vancouver's starting eleven as best I can but there's a lot of uncertainty. Russell Teibert, for example, is day-to-day with a leg problem and is heading off to the Canadian U-20 team on Sunday anyway. He may well sit this one out, in which case Blake Wagner would move up to left midfield and Bilal Duckett will start in defense. Actually, they may start Duckett anyway. They may start whoever-it-is at centre back and keep Alain Rochat at left back, instead of moving Rochat to the middle as I've suggested below. Basically, the battered-and-bruised Whitecaps have a lot of lineup options, but none of them are too palatable.

The official Whitecaps preview card says that Jay Nolly is starting in goal, the defense is Rochat, Duckett, Janicki, and Leathers, and Wagner is going at left midfield. But the official Whitecaps preview card says a lot of things. It said Greg Janicki was going to start last week; how'd that work out? Besides, Rochat was widely expected to be the Whitecaps' starting centre back before DeMerit signed and Janicki surprised everybody. So this is my best guess. 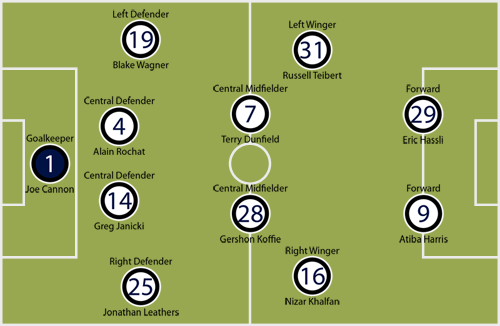 You're probably thinking the same thing I am. "Wow. That looks like an expansion team with Eric Hassli on it." We're probably also going to see large amounts of either Jeb Brovsky or Bilal Duckett, at least off the bench, and that might be worth a goal against right there.

As I discussed yesterday, I don't think most of Philadelphia's players are individually that brilliant. But they do have Sebastien Le Toux, occupying the Dwayne De Rosario role of "guy who's a risk to score even if you encase his teammates in carbonite". They also have Danny Mwanga, who's not a league-leading striker but is an obvious talent at only nineteen years old, and whatever's left of Carlos Ruiz might be able to batter Vancouver's depleted defense into ruins.

The Whitecaps will be able to make some inroads against Philadelphia's defense, of course, but apart from Eric Hassli who's going to get results? Russell Teibert is limping and being used conservatively; there's a decent chance he won't even play. Davide Chiumiento is out. With them gone, 90% of the creativity in our offense is gone with it. I love Terry Dunfield as much as anybody, but as a playmaker he's best when guys out wide are nutmegging some sons-of-bitches and opening room for those quick passes Dunfield unleashes so well. When defenses key on Dunfield, he hasn't got the ball skills to get by them on his own. Gershon Koffie showed flashes of offensive pizazz in Division Two but has yet to translate that to MLS.

Long-time readers of Eighty Six Forever and Maple Leaf Forever will recall that I can pretty much talk myself into anything. I'm the sort of guy who, come Gold Cup time, will regale you with a 1,500-world article on how Canada matches up well with the United States and might just win that game if Milan Borjan plays to his potential and Ali Gerba keeps off the fried foods for a couple of weeks. But I'm having a hard time talking myself into this one. Our only real hope is that we get lucky or that these players, most of whom we still don't know a lot about, show us something special.

But that's as likely for the Union as it is for us.