I don't really see the point of overanalyzing this match, given that we have had weeks (months) of analysis. From a fan's perspective, this is obviously the most important night of the season so far. I'm not sure what else I have to add on the afternoon, the spectacle, the "game around the game" that has been the traditional purview of these pre-jump paragraphs in the past.

I mean, it's the Vancouver Whitecaps' first game in Major League Soccer. It's not actually all that different from what we're used to. In the past three years we've played Toronto FC some six times, most of those matches memorable for all the right reasons. That's not quite as often as we've played the Portland Timbers but it still makes the FCs our second-most familiar opponent in Major League Soccer.

Of course, everything is different. There'll be four times as many fans at Empire as we ever saw at Swangard Stadium, because now that we're in Major League Soccer the facilities are uglier, the players marginally better, the tickets more expensive, and the opposition the same.

I don't want to sound like I'm lashing out against the hype, I really don't. I got up at the crack of dawn this morning to go set up banners, I booked the day off work months in advance, and I have enough scarves to suffocate Atiba Harris. This is as big a day for me as it is for you. But now, with kickoff mere hours away, I'm going to enjoy setting aside the moment and just talking about soccer.

The Vancouver Whitecaps are fighting a few injuries and that'll affect their starting eleven. Jay Nolly is expected to go rather than Joe Cannon, who's still getting back into shape after suffering an ankle injury in pre-season. Both of the starting central defenders, Jay DeMerit and Greg Janicki, are fighting minor bumps but ought to be ready to go in this one. John Thorrington has an injured leg and is just day-to-day; given the strong performances we've seen from Gershon Koffie all pre-season I don't expect the Whitecaps to rush the Thunder God back. Michael Nanchoff and Shea Salinas are both out long-term. So, bearing in mind that the Whitecaps have managed to use up all the ice packs before the season has even started, here's my projected starting eleven. 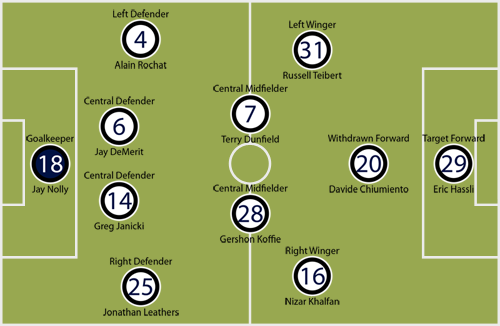 There's been a lot of talk that Toronto FC is rebuilding. Can you rebuild something that was never built? Toronto FC is building, the Vancouver Whitecaps are building, everybody's building. This might not be a great match for the neutral, for somebody who's looking forward to a specimen of soccer beauty. It'll be a fantastic one for the Whitecaps fan, though.

Let me take off my white-and-blue glasses for a moment. I've been going around cockily predicting a big Whitecaps win everywhere that lets me type, but position by position Toronto FC has a few advantages. They're better off in goal, with Stefan Frei one of the league's elites and more than capable of stealing a game if, just to pick something that could never happen, Vancouver's forwards leave their scoring boots in the prefab locker room. That alone would give Toronto a step even if the rest of their lineup was grossly behind Vancouver's, and of course it isn't.

I may think that Alain Rochat, Eric Hassli, and Davide Chiumiento are the three most talented players in the game for either team. But it's also the first competitive MLS game for any of them. Only Chiumiento has played before in North America and he wasn't very damned good. If the starting lineup I posted winds up being accurate, the Whitecaps will have a combined eighteen games of MLS experience in their starting eleven. Meanwhile, say what you will about Dwayne De Rosario but not only has he got bags of skill, he also knows how to get results in this league. Chiumiento may be better tomorrow but De Rosario has to be better today. Meanwhile, Adrian Cann and Nana Attakora provide a centre back combination that'll give Hassli and Chiumiento a hell of a time.

That said, I still have to give the Whitecaps a bit of an advantage. Maybe it's just the fact that I've seen more of Vancouver's players, but I think they'll have a big edge over Toronto in midfield out wide. Russell Teibert is eighteen and Nizar Khalfan is inexperienced, but Dan Gargan is still Dan Gargan. Mikael Yourassowsky is still... who the hell is Mikael Yourassowsky? When I heard that name in the Carolina Challenge Cup I thought they were kidding! I'm cautiously optimistic that Teibert and Khalfan (and maybe Chiumiento, if he gets some room) can break them open at least once. Meanwhile, there's just no way the likes of Nathan Sturgis and Oscar Cordon are going to be able to get by Alain Rochat. On the right hand side, Vancouver only has Jonathan Leathers but Toronto has Elbekay Bouchiba, who couldn't make a starting lineup in the Qatar league and is the first MLS player who is also an awful Scrabble hand.

Now, Dwayne De Rosario could be a gamebreaker down the middle. Jay DeMerit has played in the English Premier League and can probably cope with De Rosario's shenanigans if he's healthy and used to his teammates. Those are two pretty big question marks, though. Greg Janicki, meanwhile, will probably be a step too slow against a player like De Rosario and his biggest advantages (size, strength, heading ability) won't help him much when the ball is at the Toronto captain's feet.

It would be a lot more worrying if Toronto's forwards were, um, anybody. Who are they going to use? Gianluca Zavarise, another MLS rookie and a very modestly talented player? Javier Martina, who's played three first-team games anywhere in the world in his life? Alan Gordon, who's tall but has abundantly proven he can't score to save his life? Maicon Santos, who, erm, is actually pretty good but erratic and no superstar at the best of times? Basically, De Rosario is going to have to do it all himself, which isn't an unfamiliar role for him but at least means that DeMerit can do the tough defensive work without fear of exposing Janicki without support against a secondary player.

Still, the Whitecaps don't have a decisive advantage. Frei and De Rosario are the two biggest gamebreakers on either team, unless Hassli, Rochat, or Chiumiento are quicker learners than they seem. The Toronto defense has an awful high "random European dude" quotient; I guess that's why they call them the Reds. But they also have Attakora and Cann, who can take care of business if Cann didn't spend his holdout training with Ali Gerba. I give the Whitecaps the edge on team talent, but Toronto might have the right combination of individuals to prevail in an early game between two teams that haven't developed chemistry yet.

This is all a long-winded way of saying that, while I'm still predicting a Whitecaps win (2-0, to be exact), there are a lot of variables in this game. It could turn out 4-0 Whitecaps and I wouldn't be surprised. It could turn out 2-0 Toronto and that wouldn't surprise me either. I guess unpredictability is a good thing, but when your team is making their MLS debut on national television it's a short trip between "unpredictability" and "terror".