Canada's Roster for Greece Announced, But Not a New Captain...

Share All sharing options for: Canada's Roster for Greece Announced, But Not a New Captain...

Canada's roster for the February 9 friendly against Greece is almost startling. As we expected, Stephen Hart named a mostly European-based contingent but there's a fair amount of North American flavour. The team is also relatively unexperimental. Forward Tosaint Ricketts, defender David Edgar, and goalkeeper Milan Borjan are all in line for their first caps, but both Ricketts and Edgar sat on the bench in earlier friendlies (Ricketts against Cyprus in 2009 and Edgar in our most recent tilt against Ukraine last year) while Borjan is a Serbian native who only recently committed to the Canadian national team. Of the rest, only Olivier Occean and Jaime Peters would be likely to miss our strongest twenty-three-man squad. 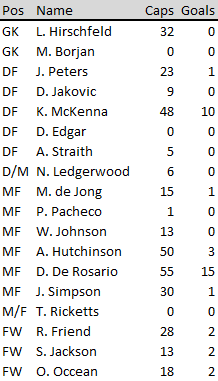 Dwayne De Rosario is making a return to the Canadian lineup, which will make some of you happy and the rest of us annoyed as hell to see that selfish, ball-hogging prima donna screwing up our offense yet again. But how many good players have been excluded? Tomasz Radzinski should be there, of course; he deserves it more than some of the guys on the team but he's old and his team is fighting relegation and maybe he turned down the call. Other on-form Canadians like Iain Hume or Chris Pozniak are neglected, and warhorses like Ali Gerba or Mike Klukowski, among the team's best players when called but now chronically absent, are still forgotten. Klukowski is only just back in training after an injury and with the NASL season months off Gerba isn't training at all, but both remain big absenses.

We're not even at the biggest shock yet. Paul Stalteri has been left off the team. Paul Stalteri. Our most capped player, a fixture for over a decade and captain since 2007. He is literally in exile from his club, German Bundesliga side Borussia Mönchengladbach, having elected to collect a big paycheque rather than find a new team and not even training with their first team any longer. But that's been the case for some time and yet Stalteri has been dutifully starting almost every game, missing only the occasional "B" friendly since 2006. No longer. It is, in a very real sense, the end of an era.

Whether you believe Stalteri deserved to be dropped (as many Voyageurs do) or that he still showed enough to hold on to our relatively weak right back position, this is a sad moment. Even many of Stalteri's most inflamed adversaries are almost in mourning. Nobody likes to see such a true, devoted servant of the national team go with a whimper rather than a bang, and barring an improbable Radzinski-esque comeback it's hard to imagine Stalteri's return.

Did Stalteri deserve another game for Canada? I suspect he did. Yeah, he isn't part of Borussia Mönchengladbach, but that's not news. Meanwhile, Stalteri's put in a few fairly good games. He drew criticism from Canadian fans during his salad days with Werder Bremen and Tottenham for never doing as much as a player of his skill seemed like he should. As our captain and an aging former star, he was always under the microscope while moving into his dotage. Nobody would claim that Stalteri has been excellent. But he has at least been consistently acceptable, and at times fairly good: I think of our 2-2 draw against Mexico at Commonwealth Stadium, where Stalteri not only shut down some pretty famous offensive players on the right side but mounted some strong offensive forays and rang a rousing thirty-foot shot off the crossbar. I can't think of a single match I've seen where Stalteri really played badly (although I missed our 5-0 pounding by Argentina last summer), and our selection at right back is pretty mediocre. Adam Straith and Nana Attakora are natural centre backs, Jaime Peters is to put it kindly "erratic", Nik Ledgerwood is playing very well at right back in Germany right now but is both incredibly versatile and relatively unblooded at fullback, and Chris Pozniak is still Chris Pozniak. After that, we're down to kidnapping Richard Hastings from his soccer academy in Nanaimo and trying to convince Wes Knight to get a Canadian passport.

Toronto FC fans mock the rest of Canada for saying that our national team plays better with Dwayne De Rosario out of the lineup, but seriously. Our last win with De Rosario in the lineup was June 20, 2008 against mighty St. Vincent and the Grenadines. Our last win against somebody who's ever qualified for the World Cup with De Rosario kicking around was on June 6, 2007 against Costa Rica in the Gold Cup, or as it's known "a really long time ago". Since the 2007 Gold Cup, our record with De Rosario is a sterling three wins (two against St. Vincent and one against formidable Martinique), two draws, and six losses. De Rosario missed out on every single one of Canada's inspiring performances in that period: the 2-2 draw by a beaten Canadian team against Mexico in Edmonton, the almost-successful 2009 Gold Cup, the 1-1 last-ditch draw in Venezuela, our triumphant revenge over Honduras in Montreal, and the most recent highly credible draw in Ukraine. At some point, this stops being a coincidence. Toronto FC is training in nearby Turkey so it makes sense to take a player from there, but he'd have been better off with one of the defenders or even a pup like Doneil Henry.

De Rosario's problem isn't that he sucks, because he obviously doesn't. It's that, in the latter stages of his career where he's become a brand and a self-identified icon rather than a team player, De Rosario is only remotely effective when the offensive is being channeled through him; partially because that's just his style and partially because he plays incredibly badly with others. With Toronto, this almost works because he is that much more talented than most of his teammates and the skill level of MLS is relatively lower. It never, ever works with Canada, especially not against credible opposition like Greece, and when he doesn't get his way De Rosario is reduced to sulking up and down the left wing slinging half-assed one-touch crosses to nobody in particular. He's been doing it so long I can practically perform the steps. I want no part of him on my national team.

Another returning regular I have a problem with is Rob Friend. While De Rosario is all skill and bad attitude, Friend has a pretty good attitude but sucks so hard he reduces the air pressure whereever he plays. For a long time defenders of Friend's inexcusably horrific strike rate with Canada (two goals in 28 caps) have pointed to Friend's scoring record with his club in Germany as proof that he will somehow magically become something other than a complete fucking liability with the national team. Except now the guy can't score with his club either. Borussia Monchengladbach sold him last summer and after a briefly promising start Friend has been consigned to the bench of his new club, second-division Hertha Berlin. Meanwhile, Iain Hume is scoring with Preston North End and Ali Gerba is still Canada's undefeated champion striker. Nope. Instead we get another ninety minutes of the ball bouncing off of Friend's enormous stone feet.

It's not all negative, as I'm excited to see Tosaint Ricketts. There are some concerns about his health, as he tweaked his thigh in a friendly against Sparta Prague. But Ricketts has been moving up in the world: he recently signed with Politehnica Timişoara of Romania after a successful spell in Finland and has had a rousing, goal-filled friendly season. Just 23 years old, Ricketts is long overdue for his first international appearance and I'd strongly consider him as our starting striker; particularly if Stephen Hart continues his odd insistence on playing Simeon Jackson on the wing.

Similarly, I'm glad to see David Edgar. He's in a familiar position: out of favour with his club (again), on loan to Swansea (again), hoping to make some noise and establish himself in England (again). He's spent so much time on the bench with Burnley that there's no Canadian who isn't worried about him, and when he went to the Ukraine game only to spend all of that riding pine it began to look like the soccer gods were playing a practical joke. His commitment to Canada has been questionable in the past but this is twice in a row now he's answered the call and he deserves minutes. If nothing else, we Canadians would like to see him in action again.

Nik Ledgerwood is a deserving callup. At 26 years old Ledgerwood has only six caps; a disappointment for all of us who saw him growing up on the Canadian U-20 team and predicted great things. But last year with FSV Frankfurt Ledgerwood finally lucked into a team that appreciated his blend of steadiness and remarkable versatility (he can play comfortably at full back, in central midfield, or on either wing, and while mostly a defensive player can also play a more attacking role). That bought him a two-year contract with recently-relegated SV Wehen Wiesbaden in the German 3. Liga and, increasingly, a growing number of starts. Ledgerwood has particularly been seeing action at right back, where (as mentioned above) Canada needs the help, but even when he's not starting Ledgerwood is a remarkably useful Swiss army knife of a player.

Finally, there's new goalkeeper Milan Borjan. Borjan has become something of an idol among hardcore Canadian supporters: not only is he a starting goalkeeper in the fairly good Serbian first division, but he actually turned down Serbia to play for the Canadian national team. Serbia's interest in Borjan never seemed particularly serious until Canada approached (link in Serbian; Borjan never played for Serbia's youth setup), but Borjan immediately made all the right noises about, having immigrated to Canada as a youth with his family to avoid the Balkan conflicts, he was grateful for what Canada had done for him and only too eager to suit up for les Rouges. His attitude alone would make him commendable even if he didn't have the ability to back it up: at only twenty-three years old, Borjan is the starting keeper for FK Rad in the Serbian SuperLiga. Rad is a mid-table team at best and the SuperLiga is ranked only twenty-seventh in UEFA, but that's very close to Lars Hirschfeld's Norwegian league (ranked twenty-sixth) and Canada is short on starting goalkeepers anywhere. Borjan definitely deserves a chance.

Don't let my negativity fool you. On balance, I'm very pleased with this roster. Canada will be able to play a fairly strong starting eleven, and though of course they can't run with Greece they'll at least have a chance to play their best. It's not a perfect lineup, but no Canadian lineup ever is. We had worse in Ukraine, and that went pretty well.

My Hastily-Drawn Canadian Lineup for February 9 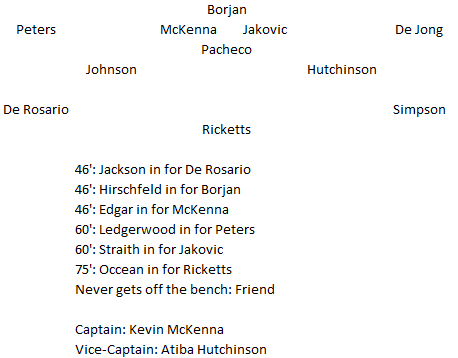