Edit, 10:48: the Whitecaps have made this signing official. Terms not yet released.

Edit the Second, 11:29: as predicted in this now very redundant article, Matt Kieltyka of Metro Vancouver reports via Twitter than Lee is not a Designated Player. 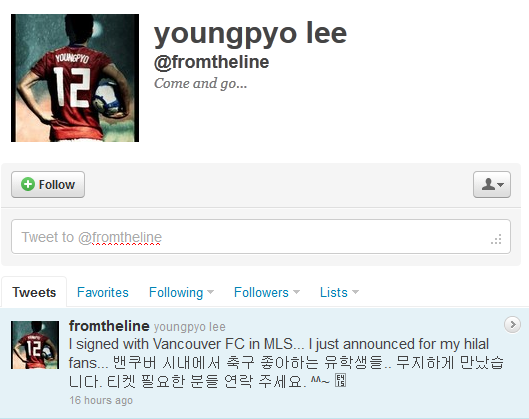 So much for the ambiguous reports we saw when Lee's signing was broken last week. He doesn't know what our team is called but Lee seems to be signed, sealed, and delivered. Last week the Whitecaps accidentally posted a blooper on YouTube showing Martin Rennie and Carl Valentine cracking up over Valentine's pronunciation of "Lee Young-pyo". As Bruce Constantineau reported and Flynet Pictures photographed, Lee arrived at Vancouver International Airport on Sunday to make things official. There are rumblings the deal will be announced, formally, on Wednesday.

The Whitecaps organization is still officially not commenting but there are no doubts. Last night on It's Called Football, Ben Rycroft lightly grilled Bob Lenarduzzi over Lee's signing, and while the Mullet didn't confirm anything he barely even pretended this wasn't the most open secret in MLS history.

So Lee Young-pyo is a Vancouver Whitecap in everything but name. That we know. Do we know anything else?

We know (or at least we think we know) that Lee is signed to a one-year contract plus a one-year team option; this has been in the Korean press and was carried in North America by ESPN. The short term alleviates a lot of my concerns about Lee's contract, since it exposes the Whitecaps to minimal risk. If Lee does well we have him for a couple of seasons. If Lee does badly it will hurt the Whitecaps in 2012, but at least he won't be a burden long-term along the lines of a Julian de Guzman.

Rycroft: ESPN is reporting tonight that it's a one-year deal with a one-year option. Would a player like Young-pyo hypothetically be worth a DP slot in MLS?

Lenarduzzi: (chuckling) Wow! You're not giving up! You know what, I'm gonna leave that one for speculation. We do have a DP slot available if that type of player were to be interested in us.

People have seized on Lenarduzzi's "leaving that one for speculation" as an indication Lee will be a designated player, but I'm not convinced it's that simple. I remember a year ago when Jay DeMerit was supposedly this close to signing for the Vancouver Whitecaps for a few months, yet there was a long hold-up in getting the deal done. DeMerit was a former English Premier League defender and a World Cup-calibre international. DeMerit was a bit younger and we all thought he was likely to be a designated player. However, he signed a regular contract with a guaranteed salary over the DP level but bought down with allocation money and the Whitecaps kept their first DP slot available for Eric Hassli.

Lee may well sign as a designated player; I said last week that I thought he probably would. I don't think that soundbite proves anything.

The Whitecaps are probably trying to do with Lee Young-pyo what they did with Jay DeMerit: sign him to a contract that's either just below $350,000 or close enough to it that they can keep him from taking that third Designated Player spot. I also suspect that's the reason this announcement has been so prolonged, as the Whitecaps try to pull off a little salary cap wizardry.

That would explain why Lenarduzzi was so reluctant to say whether Lee will be a Designated Player or not: even he doesn't know; the organization is still working on it. Earlier in the interview Lenarduzzi talked quite happily about Lee's qualifications as a leader and as a utility fullback who can save the Whitecaps from 2011's Right-Back Roulette, so it's not like he was holding his cards entirely against his vest.

The arrival of Lee gives the Whitecaps three experienced defenders: Lee, DeMerit, and Alain Rochat. Carlyle Mitchell and Michael Boxall are young central defenders who showed glimpses of quality but who haven't proven anything. Left back Jordan Harvey looked good on Philadelphia's defense and sub-Jeb Brovsky awful on Vancouver's so who can figure him out? There is no backup right back unless you count Gershon Koffie, and please don't do that. If Lee signs for around $350,000 the Whitecaps will be spending almost a million bucks on a backline that's still missing at least two important pieces before it can be competitive. That's without considering the midfield, which obviously needs a linking central player to complement Koffie and Bryce Alderson as budding defensive midfielders. It puts the degree of difficulty Martin Rennie will face in 2012, as well as the mediocre job Tom Soehn did in 2011, into perspective.

If Lee plays quality right back for Vancouver in 2012, it'll go a long way to helping this team. But it's staggering that we might be adding a defensive player to fill a position of great need and still have a defense that badly needs shoring-up.