When Players and Supporters Communicate Too Much

Share All sharing options for: When Players and Supporters Communicate Too Much

We supporters need to walk a fine line between being honest and being fair. When I write on Eighty Six Forever about Bilal Duckett or Atiba Harris or Rob Friend or another player I don't have much faith in, it's always with some hesitation. I owe it to my readers not to sugarcoat things or pump the tires of players I think are inferior, but at the same time I don't want to annoy those same players. I don't want Shea Salinas storming around a practice after a friend pointed him to an Eighty Six Forever article thinking "Whitecaps fans are assholes" or, worse, "what's the point of performing for these ingrates?"

This isn't my ego talking. North American soccer is a small, close-knit community filled with perhaps the most intelligent, well-read players of any major North American sport. I've never met Russell Teibert in more than passing but he knows what my nickname for him is. I've gotten nice messages from ex-Whitecaps regarding articles I wrote on the occasion of their departure. I've never been called out by a player I rag on for doing so... but I'm not blind enough to think that players only read the nice things I say and magically skip the nasty things. It's just that Peter Vagenas is too smart a guy to punch me in the face for being such a dick.

So I try to be fair, try to give bad players credit for the good things they do (Duckett and Salinas are both great guys in the community who can't even recognize the idea of "not trying 100%", Harris is a reliable finisher and a very personable fellow, Vagenas has had a few good games and would probably be very useful holding a lead if the Whitecaps could ever get one). I'm not going to pretend I always succeed but I do have the best of intentions for the simple reason that I really want those awful Whitecaps players to be happy so they can prove me wrong and tear MLS a new asshole. I was a skeptic on Terry Dunfield, was at the point of despair when he signed, and wound up being one of his staunchest defenders before we traded him. It can happen.

As a fake journalist, I feel I have to live up to those standards I just described and I don't always do it. I don't even come close to always doing it. So inevitably, these ideals don't apply in most fan forums, where supporters of a team show up to share their opinions and let off some steam in what they view as a private environment. The problem is that the world of North American soccer is insular, almost everybody of a given player generation knows everybody else, and people still read these things. When you describe a player, particularly a more obscure one, in damning terms on a major supporters' message board there are fair odds the player will find out about it. This isn't always what you want to happen.

If you've been reading this site long enough you won't need to be introduced to Randy Edwini-Bonsu, long-time Eighty-Six Forever favourite and ex-Vancouver Whitecaps forward. I've been a fan of Edwini-Bonsu since forever: he's quick, he finishes well, and he has a nose for goal. However, Teitur Thordarson never had the same faith in Edwini-Bonsu, used him sparingly in 2010 (injuries didn't help), and he was eventually cut before 2011 Major League Soccer training camp.

Edwini-Bonsu moved on to AC Oulu in the Finnish second division and had great success, shooting the lights out and finishing second in league scoring. This got him some big trials abroad, including one with Eintracht Braunschweig of the German 2. Bundesliga. Edwini-Bonsu scored both of Braunschweig's goals in a friendly against Werder Bremen and a contract in the German second division seems almost inevitable.

All good news, and it's been avidly followed in a thread on the Voyageurs' message board. It's a big move for Edwini-Bonsu if it pans out; so big that Canadian fans are concerned Edwini-Bonsu may be tracked by the Ghana national team. Edwini-Bonsu was born in Ghana but moved to Edmonton, Alberta as a child; he played for the Canadian U-20 team as a favourite of Stephen Hart and had one full senior cap in a 2010 friendly against Jamaica. Because he's never played for the Canadian senior team in a Gold Cup or World Cup qualifying he remains eligible to switch to Ghana and Canadian fans, who have been burned a few times by this, are naturally a little paranoid. So a few fans started consoling themselves by saying that Edwini-Bonsu obviously isn't good enough to play for Ghana so why worry?

A quick glance at Ghana's roster shows that they have called up forwards playing in Turkey, in South Korea, in Greece, and in the English Championship for recent matches; a good lineup but not a murderer's row, and if Edwini-Bonsu succeeds in Germany it's not too difficult to find a space for him there. But that's not the problem; the problem is that Edwini-Bonsu read the thread about him, got upset and, unlike most players who read these things and get upset, wrote three tweets about it this morning. 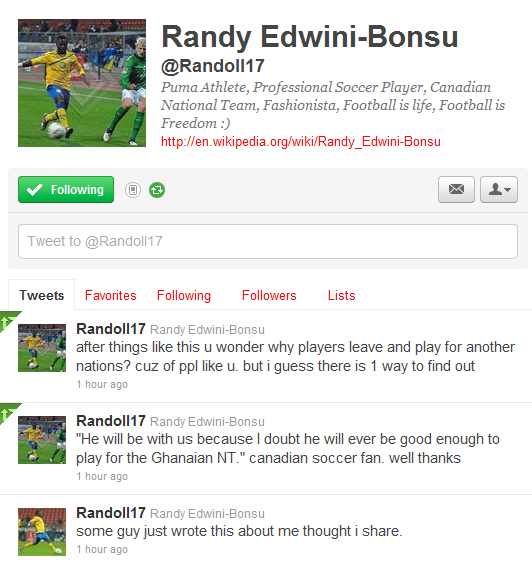 Do I blame Randy for being upset at what was said about him? No; he's trying to take the next step in his career and there are his alleged "supporters" saying it's such a relief that he's not very good. More players than we know see criticism like that and are unhappy about it; the difference is that Edwini-Bonsu said so.

Hopefully this story will have a happy ending. There's plenty of support for Edwini-Bonsu and the rank-and-file Canadian supporters have been saying so; if he was starting to doubt whether his home country was behind him then he should know now. I know most of the people talking about Edwini-Bonsu in that thread and it's easy for me to see that they were just apprehensive; looking for silver linings to convince themselves they're not about to lose another talent to another foreign country, even if the player himself would certainly consider it offensive. After all, players don't read these things, do they?

Well, they do, and we supporters always have to bear that in mind. I'm not sure I have any practical suggestions here beyond "fans: make sure you think about what you're saying before you say it" and "players: remember that we're viewing the game from a completely different perspective than you, we have completely different priorities and wishes, and what you think of as an insult might just be clinging to false comfort." But you'll never get a supporter to stop venting about an emotional issue, and you'll never get a player to stop being unhappy when one of his fans claims he sucks.

I guess I'm just venting too.