Wait, I can do better. With Saborio, Espindola, and Beckerman away, Real Salt Lake's leading remaining scorer is defender Nat Borchers with three. Yet Vancouver still has Camilo Sanvezzo and his nine goals in the lineup. Their leading remaining playmaker, Collen Warner, has five assists; ours is Davide Chiumiento with nine. My god, we're the favourites!

At the beginning of the season, I just might have been able to delude myself. Salt Lake's lineup is badly weakened thanks to this match being rescheduled after a waterlogged fake grass pitch canceled the tilt at Empire Field. The Vancouver Whitecaps are, of course, a pretty poor soccer team... but are they as poor as a Salt Lake team missing most of their players of consequence, with a lineup hacked together from spare parts and bits of string, their playoff destiny all-but-assured, and a three-game losing streak in the rear view mirror?

Alas, the Whitecaps are taking "playing out the string" to new heights. Their last game against Portland was an eleven-man turd in a $500-million punch bowl. Tom Soehn has planned to rotate his squad, which is good, but there are ominous signs he might do so by being completely insane. This is an MLS Reserves match with more expensive tickets.

Predict the Whitecaps starting eleven? Are you kidding? I'll tell you who we won't see: Atiba Harris is still recovering from his eternal knee injury, Russell Teibert seems done for the season with a cut on his toe, Jonathan Leathers is out with a why-did-we-cut-Wes Knight-again injury,

Will we see new Trinidad and Tobagan defender Carlyle Mitchell? He played the Reserves match on Monday and by all accounts didn't embarrass himself. Will Bilal Duckett come into the lineup? I have to bet against it since he's signing autographs an hour before kickoff but you never know. And with Leathers out who will play right back? Obviously Jeb Brovsky is the favourite but, then again, Greg Janicki played right back in the Reserves match and he... he... he failed, as anybody familiar with big, strong, but not all that quick Greg Janicki knew he would. Maybe Nizar Khalfan will slot in. That has Soehn's DNA all over it, doesn't it; Nizar Khalfan at right back?

Screw it, I'm not even going to guess. 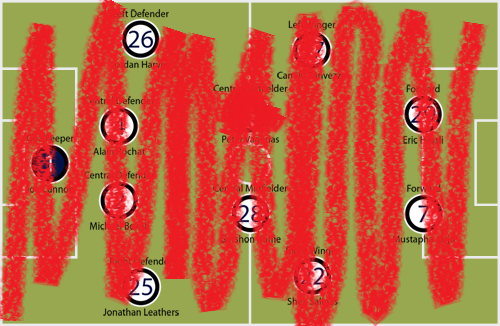 The whole game is a world of uncertainty. Even without Hassli, if the Whitecaps play their best they have a good chance of getting three points against a seriously undermanned team with little incentive. But are they going to play their best? Will Tom Soehn rotate in any new players, and if he does will they provide the right balance between "hunger" and "skill"? It's no use wanting it if you can't deliver, as Jonathan McDonald has proven.

This game could go in any of a hundred different directions. A Vancouver win would be a surprise but not a shock, while a Salt Lake victory would be expected but, at the same time, a faint upset. A draw seems fair, but given Salt Lake's vast superiority to Vancouver in the league this year wouldn't that be just a bit of an upset?

The lineup and the drive of the Whitecaps will determine a lot. If this game happened three months ago, Vancouver would have been in the driver seat. Instead we find ourselves hoping they put in a real effort.