It's hard to believe the Vancouver Whitecaps season is coming to an end already. After just half a year of almost unending soccer agony, watching our promising team collapse deeper and deeper into the basement like a house undermined by termites, watching popular players and coaches cast off for inferior replacements, this is really the end.

The game is meaningful, for those of us who take comfort in being merely second-worst. One point and the Whitecaps will surpass 2007 Toronto FC as the best MLS expansion team in Canadian history (out of two). A win or a draw will save the Whitecaps from the Wooden Spoon: Toronto FC went up 1-0 at home on the New England Revolution before pulling a typical Toronto collapse and then an atypical Toronto recovery to draw 2-2. New England and Vancouver are level on 28 points but New England has the better head-to-head record, meaning that a loss puts the Whitecaps bottom of the table.

The Colorado Rapids, today's opponent, are playing for a home game in the MLS wild card playoff round. That's a bit of a more substantial achievements but, given that if they win tonight Colorado will have an equal number of home and road wins, it doesn't actually count for that much either. Today is a day for variably-sized moral victories.

Today is a day for melancholy. The Whitecaps are running "Fan Appreciation Night" today: they've been profiling fans of all stripes on their websites this week and four Whitecaps supporters groups, one of which may be fictional, will be playing seven-minute games at half on BC Place's hallowed turf. It's all good stuff from an organization that's focused a lot more on the supporters' experience ever since they started trying to sell 2012 season tickets. But it's also a distraction from the shambolic year on the field. The Whitecaps aren't pretending this year wasn't a disappointment competitively, they haven't shied away from admitting it in the press... but there is a distinct air that they're keeping a stiff upper lip, as sure as singing "Always Look on the Bright Side of Life".

In almost every on-field category this season has been a horror show. In almost every off-field category this season has exceeded most expectations. There's plenty of hope for the coming season, plenty of good players: this team is probably less doomed long-term than our rear-end rivals in New England. Incoming head coach Martin Rennie now has "NASL choke artist" on his resume but he is, at least, young, bright, ambitious, and enthusiastic. Russell Teibert is up to "questionable" on the injury report, which points to a promising future in which Canadian Soccer Jesus may not be injured at all. And there's always the hope that Big Phil might play.

I'm feeling gloomy as this failure of a season ends. Tomorrow, though, it'll be in the past and hope can take over. So the Whitecaps had better give me something to hope for.

The Colorado Rapids are a pretty average team; they've secured a playoff spot but nobody's predicting great things from the 2010 MLS champions. They also have one of MLS's better road records; counterintuitive given the infamous altitude at Dick's Sporting Goods Park but true. The Rapids are actually tied for fourth in MLS road wins.

Playing at home is Vancouver's one advantage; it's easy to forget but the Whitecaps' 6-5-5 home record isn't actually suicidally terrible. If the Rapids can neutralize that advantage (and their record suggests they can) then the Whitecaps are probably screwed.

On the other hand, Vancouver is enjoying a week-long rest; it's arguably even longer since they obviously didn't work very hard last week in Dallas. The Rapids played Wednesday in Mexico although they didn't exactly play the mother of all lineups (Miguel Comminges, for crying out loud). Still, Mexico is Mexico and some regulars saw time in that game. The Whitecaps might be able to exploit fatigue.

Frankly, if the Whitecaps can't get fired up for their final game after a season like this then they should all be shot out of a cannon. I realize and I understand morale must be low but come on.

As ever, we must look to the borderline players to get playing time and prove that they belong in Major League Soccer. I still have my questions about Long Tan and therefore would love to see him start. Philippe Davies, obviously, must play, and nobody on this roster has to do more to redeem himself than Mustapha Jarju, although maybe he'd be better off as an impact substitute to better respect his annoyingly poor fitness. I'd even run Jay Nolly out in goal, simply because I think we all have a bearing on Joe Cannon by now.

Not that I'd sit every regular. Camilo Sanvezzo has twelve goals, four back of leader Dwayne De Rosario: obviously that's not going to happen (but wouldn't it be so awesome if it did?), but pipping Thierry Henry for third place is still a possibility. And who wouldn't love to see Eric Hassli break out of his slump?

This isn't a predicted starting eleven; far from it. It's just what I'd do if I were Tommy Dreamer. 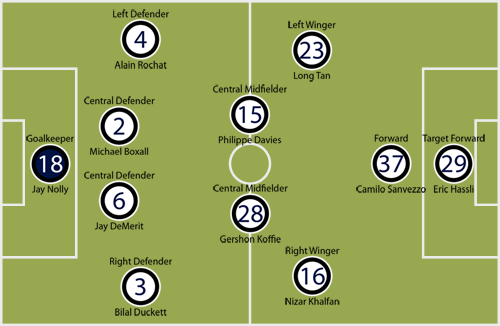 You're goddamned right that's Bilal Duckett! Say what you will about Duckett but he hasn't had many opportunities to prove himself, Jonathan Leathers is still injured, and Duckett definitely isn't Jeb Brovsky. Besides, Colorado's wide attack doesn't exactly put the fear of God into me. They're a good, well-spread offense, and of course as long as Conor Casey is healthy any cross into the box is a real danger, but at the same time the onus is going to be on big, tough DeMerit and Boxall to stop Casey rather than for our inevitably-limited Duckett/Brovsky to try and cut down the crossers.

Nor am I Tommy Dreamer-ing Long Tan by playing him at left wing. Tan actually mostly played left wing with FC Tampa Bay last season in the NASL. So there.

Obviously this isn't the lineup I expect to actually see adopted but it should give you some idea what my mindset is. The only reason I'm not calling for Brian Sylvestre to start in goal is that Sylvestre is nursing a knee injury. And you know that if I thought Russell Teibert's toe was fine I'd be asking him to start every position.

Avoiding the Wooden Spoon isn't the most important thing. Developing this team is. Obviously I care whether we beat the Rapids and if we pull it off I'll be delighted... but if we get there, it should be on the back of our lesser lights.