This will be the first visit by the Portland Timbers for a long time that's utterly meaningless.

The past two seasons, Portland and the Vancouver Whitecaps have faced each other in the playoffs (with Vancouver winning both tilts). There was always the Cascadia Cup, of course, and if that wasn't enough there were two teams jockeying each other for high playoff position.

Yet this game has none of that. The Cascadia Cup has been decided, carried down the Puget Sound to Seattle, there to be festooned with that eye-burning green. Portland still has a shot at the playoffs but the Whitecaps certainly don't. Rivalry aside, if Vancouver wins or loses this game it will make no difference to their chances of getting some silverware this season (which are zero).

Obviously there's something to play for. Vancouver's debut at BC Place, the world's most expensive concrete block with a tarp stretched over it, is a source of great excitement to all fans and players. The Timbers are probably Vancouver's biggest rival, a rivalry strengthened by two years of fencing amongst each other while Seattle tottered around aimlessly in Major League Soccer by themselves. Portland will certainly come into BC Place looking for three essential points and, with the historic nature of the occasion facing them, one hopes that the Whitecaps will respond with equal ferocity.

Of course, last week against the Seattle Sounders the game was little less historic and the stakes much higher. The result was a 3-1 loss in which the Whitecaps crumbled like it had become second nature to them. Rising to the moment seems beyond the Whitecaps at present: instead they try to drag the moment back down to them.

Since I haven't done one in a little while, here's my best guess at the anticipated starting eleven. You remember these? I sure do. They started being a lot less fun when I had to put "Peter Vagenas" in there.

Anyway, Alain Rochat is back from suspension, which will help the Whitecaps immeasurably. Not merely because Rochat is a fine player but because Jay DeMerit actually trusts Rochat a little bit, hopefully preventing some of the charging-around-the-whole-backline-trying-to-do-everything shenanigans we saw out of DeMerit last week. Other than that we still have plenty of bad news: no Russell Teibert as he continues to nurse his improbably awful toe cut, no John Thorrington, no Atiba Harris... actually, those last two don't sound so bad. But I'm not expecting any surprises in the lineup tonight. 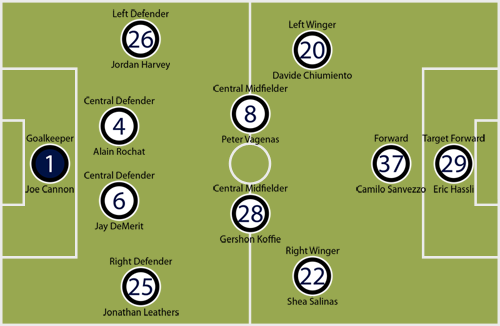 Apart from that... I'm really not sure what to say. Shall I evaluate the matchup? The Whitecaps are inferior, how's that? I'd say that we have the advantage at forward but one of the secrets to Vancouver's recent misery is that Eric Hassli is on a terrible run of form: while nobody can ever doubt Hassli's passion and commitment, the truth is that he's been isolated up top lately and hasn't had the guts or the initiative to go back and try to grab the ball on his own. Then again, in the second half against Seattle Hassli put more effort into getting the ball deep and holding it up, with the result that none of Vancouver's other players went forward for him to do anything.

Camilo's been playing well and scoring; we can hang our hat on that, I guess. He's only one man but, given the bevy of mediocre forwards Portland's been using, he's one man more than the Timbers have got. Unfortunately, I'm not sure that's going to be enough. The Portland midfield should be able to push around Vancouver's, which has too many one-dimensional wingers and too many Peter Vagenases in it for comfort. The Whitecaps' defense has been in the news lately for all the wrong reasons and Joe Cannon isn't going to steal us a game.

If Vancouver plays with fire in their bellies and gives their best effort, they can beat Portland. No question about it. Unfortunately, that's just what they haven't been doing over the past month.

My expectations are low; almost as low as my hopes. But there's still an element of belief in there Maybe the new turf, the new stadium, a louder crowd under a big, expensive roof will fire up the Whitecaps and overawe the Timbers. Portland still isn't a very good team. If ever there was a moment for Vancouver to seize three points from a mortal rival, this is it: we have every advantage off the field and match up decently on it.