Fashion Corner: Canada's New Home Kit, and How They Screwed Up

Share All sharing options for: Fashion Corner: Canada's New Home Kit, and How They Screwed Up

Have you been following the tumult over the new Canadian national team kits? You should be, even if you're not a Canada fan. It's terrific reading.

It's not like the Canadian Soccer Association was trying to replace an icon. The old kits were, essentially, an off-the-shelf Adidas job with the CSA logo in one corner. Nobody liked it; neither fans nor players. Nor Adidas, for that matter, as they limited distribution of the jersey to stores around the country and eventually told the CSA they were just not going to bother selling them anymore. Basically, nobody liked the shirts but that was okay because you could hardly buy them. Even the CSA's own online shop has been out of stock for months on end.

Unfortunately, we got our hopes up. A few Voyageurs made lovely amateur designs for Ajax-style kits that mirrored the Canadian flag and look terrific. People brainstormed about all the lovely uniforms they could imagine. We began to hope that the national team would look not just like soccer players, but fashion icons. Wavering young stars would choose to play for Canada just because we look so good.

Nope. Canadian Soccer News unveiled the jerseys yesterday at 4 PM. Canada immediately went mental. The white jersey is generally well-liked, but the red? Awful stuff! Out of Touch's reaction can be taken as representative. As of this writing we don't know if this will also be the women's kit, but there's been no mention of another specific uniform for the ladies and it seems like a safe assumption.

Upon reflection I don't hate the red jersey, though I don't like it. I think the chevron is an interesting idea, just executed in mediocrity. And I'm not just some fat-faced blogger who's going to tell everyone they're wrong without proposing any solutions. Instead, I pulled out the crayons and, after the jump, my suggestion for a top that retains the same distinctive elements of Umbro's design but doesn't look like a fashion nightmare. 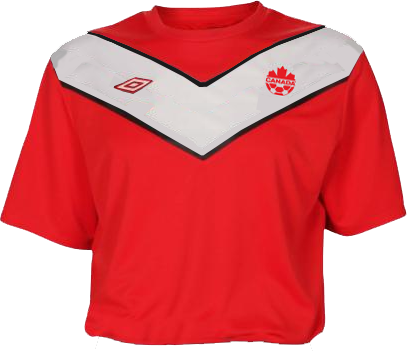 Come on. That's so much better, and it took me five minutes.

The two-striped chevron is, I think, the biggest objection. Quoting thehemogoblin in my previous FanShot on the subject, "I'm not Canadian by any stretch of the imagination, but I don't really think black is a national colour." He's right, and in any case that two-tone look is just unpleasant. At the same time, plain white-on-red is just weak, wishy-washy, barely an improvement on what we have today. So if Umbro wants black, and they want white, and they want red, and they want a chevron, why not turn the black into just an outline? I'm sorry, that looks good. Or at least adequate. Considering the mediocrity of my Photoshop job.

The new Canadian design (and I won't poach CSN's hard work by putting their photo up here; you can see it on their website linked above) looks just enough like Manchester United's 2009-2010 design to make me think about Manchester United every time I see it, without actually looking that much like Manchester United. The joke I made on Twitter was that the CSA is trying to trick Owen Hargreaves: he'll show up, see the kits, think "ah, this must be Old Trafford", and before he realizes what's happening he's kicking passes off the back of Will Johnson's feet and getting medical treatment from Davide Xausa when he inevitably blows his knee into a thousand pieces.

The critical question is, does it look better than the old kit? The previous kit was, as mentioned, generic. It came out of a box marked "JERSEYS" and had a CSA logo stuck to one breast with Scotch tape. When Canada played China, as the women often have, it was positively disorienting since the Chinese national team and the Canadian men used the exact same template. The Umbro kit is certainly distinctive. I think it'll grow on me as I get used to it and as I see it on a soccer player's body: these things always look different in action than they do posted on some guy's website.