Anybody who ever tells you they completely understand Canada's third soccer division is lying.

Yesterday was a very good example of how complicated things could get. Toronto Croatia, one of the most storied teams in their Ontario-based semi-professional league, traveled out west to take on Athletic Club of British Columbia, a team in the Pacific Coast Soccer League, in a bit of a showcase exhibition. The PCSL is fully amateur but is generally considered roughly on par with the Ontario league (we ran a look at the 2010 PCSL season last week). The Ontario-based league, which goes by the misleading moniker "Canadian Soccer League" (being neither fully Canadian nor at all related to the previous league of that name), has long cherished the goal of expanding westward but has run into a roadblock with the PCSL. Whether one thinks the CSL or the PCSL is the incompetent party (the correct answer is almost certainly "both"), the Canadian third division has remained divided to the detriment of all.

Theoretically, the visit of a storied CSL club is a good chance to mend some bridges. Toronto Croatia is a fairly good mid-table side in their league this season with some impressive history: they date back to the 1950s and as Toronto Metros-Croatia won the 1976 Soccer Bowl. Athletic Club of BC was a less worthy adversary: fighting for the wooden spoon even before they were suspended mid-season by the PCSL office. Chairman Rich Gablehouse of the Athletic Club had his quarrels with the league all season and earned his club a season-long suspension when he refused to order his players to skip watching the final of the FIFA World Cup and travel to Kamloops for a league game. Gablehouse told the league office point-blank that he was prepared to forfeit the game and eat his fine, whereupon the league office told him he'd be forfeiting a lot more games than that and ACBC's season was over.

So, in spite of the east-meets-west friendship and harmony atmosphere of Toronto Croatia's visit, the Athletic Club of BC isn't exactly a recognized emissary of the Pacific Coast Soccer League. Indeed, while everyone knows Domenic Di Gironimo is in town to meet with British Columbia soccer officials, nobody's quite been able to prove the connection with "PCSL officials" - it may be that the CSL is back to trying not to work with the PCSL and the PCSL is back to making themselves very hard to work with. Athletic Club of BC might just be a team that looks impressive and like British Columbia holding out an olive branch but is just a rebel looking to get in on what they perceive as the future. On the other hand, Athletic Club of BC hasn't severed ties with the PCSL and the match was sanctioned by BC Soccer, and in recent years all of the British Columbia leagues have begun to swing towards consolidation and national affiliation although the process is just in its infancy.

I told you this gets complicated. But it would be a pity if the politics overshadowed the match, because in the first major clash between Pacific and Ontario leagues since the demise of the Open Canada Cup, we had a surprisingly good game.

Personally, I had Toronto Croatia heavy favourites coming into Swangard Stadium. I predicted a fairly empty house predominantly made up of the Vancouver Croatian ex-pats and the soccer diehards who would watch Toronto beat the Athletic Club fairly convincingly - 4-0, 4-1, something like that. It's not that Athletic Club was terribly bad in the PCSL, although they were pretty crummy - it's that playing in the Fraser Valley regional league after their suspension isn't exactly the best preparation for taking on a good CSL team that's in the middle of their season.

Never take betting tips from me, though, because I blew it on every count starting with attendance. I should have been paying attention at the Southsiders tailgate party: I'd scooped a free ticket from the Southsiders and that was the only reason I was even attending. The cover price of the ticket was thirty bucks, plus tax and TicketMaster charges - no third division game could be worth that! And so I was pretty smug until more and more people started rolling past the tailgate, clutching fistfuls of complimentary tickets and asking if any of us needed any. The Vancouver Croatian societies had been given freebies, players and officials from the metro soccer leagues had been given freebies, freebies had been given away by the dozen in radio draws... I held a quick, informal poll while I was waiting in line to enter the stadium (another shock!) and nobody standing near me had paid so much as a pfennig for their ticket.

The Swangard Stadium staff clearly didn't expect as many people to collect their free seats as did. Only the south gate was open, meaning the line stretched for about a thousand people at kickoff time. Luckily the kick was held back as the patrons found their seats, but I was too flabbergasted to care. Papered though the house was, I've seen Whitecaps games with fewer people than that little third division exhibition. The grandstand was about four-fifths full at its peak, with other contingents in the Southside and the bleachers on the east end of Swangard. It was a good crowd, although an unenthusiastic one. It was probably the biggest crowd most of those players had ever performed for but only the Southsiders, shouting imprecations at the Toronto Croatia goalkeepers as always, showed any signs of life. 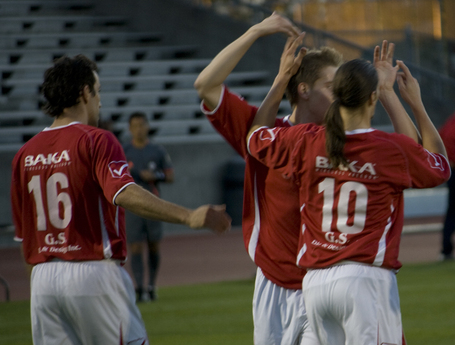 Toronto Croatia opened the scoring in the fourteenth minute on a nice piece of footwork from striker Tihomir Maletic. It was a classic third division goal: he had too much time, too much space, the ball fell to him in an easy position to the right of the goal and he could deposit it as casually as you please. Croatia was 1-0 in front and looked good value for their lead: moving the ball about effectively in spite of Athletic Club's ability to keep their shape and commendable persistence on the ball.

Did Toronto Croatia begin to get too comfortable? Perhaps. Slowly, the ball began to swing further and further to the north as Athletic Club attacked in waves, finally picking up their equalizer in the the forty-second minute: just a well-taken shot from the edge of the area after some nice passing. It was, again, a well-taken goal. Say what you will about these two teams, but they exploited each others' mistakes: not one of the goals scored last night would have shamed a professional goalkeeper.

When the teams switched sides at half, the Toronto Croatia goalkeeper found himself defending the south goal within earshot of the Southsiders. It's easy for a supporter to declare that his chants and abuse have rattled an enemy goaltender when in fact, being a professional, the goalkeeper tuned it out easily enough. But Toronto's netminder is only a semi-professional, and after imprecations about his speech, his dress habits, and his possible criminal past, we more than once caught him glancing back to the stands in a momentary flicker of agitation before he re-mastered himself. He certainly noticed us, but unfortunately his play remained at a fairly high level.

Athletic Club was playing at a rather higher level than that, though. From the whistle onward they kept up the attack, delighting the home support. The Athletic Club captain put them in front 2-1 in the fifty-fourth minute, a keen enough poacher's effort that skidded along the grass and into the bottom corner of the goal. The underdogs and the home team were in front, and that's a good combination: to the extent that the crowd did anything all night, it was cheering that goal.

The game grew chippier and chippier. The Croatia players went to the ground easily enough but there were plenty of legitimate collisions on both sides. The referee generally let the players play but distributed his share of yellows, particularly to the Toronto players: their protests were almost continuous but fell on deaf ears and in any case the Athletic Club players took their share of fouls as well. This is not atypical for this level of soccer, where physicality and force must often take the place of skill and experience, but a crowd unused to such games tired of these antics and their energy ebbed lower and lower.

It's a poor tribute to my journalism that I can't tell you the name of the man who woke them back up, but I can tell you what he did. He wore number nine for Athletic Club; a little enough fellow who spent most of the game sprinting up and down the left wing like he was being chased by Cerberus. He corralled a long ball in the seventy-first minute on the left flank, got it under control, looked up, and saw that he had room. Those semi-professional defenders from Toronto backed off a little too far, and speed kills when you give it the chance. Professionals would have eaten the small, nameless midfielder alive, but these were not professionals. He went for a run, a little shake of the hips, he retained position, cruised into the area, and before I quite realized that I was watching a tremendous run with the ball he unleashed a line drive of a shot that eluded the Toronto Croatia goalkeeper and gave Athletic Club a vital insurance marker. 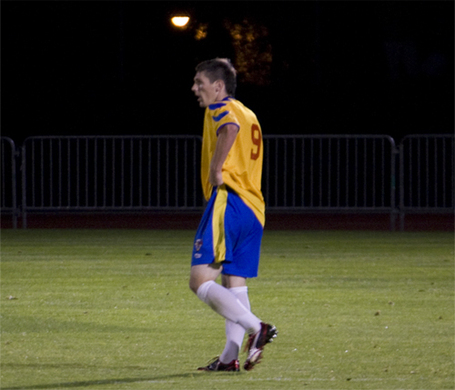 A tremendous goal! One that could never have come at a higher level, where a smarter, quicker defender would have closed down and stripped his adversary of the ball before the play even got going. The Toronto Croatia goalkeeper was replaced after the goal but it was in no sense his responsibility - he was simply the victim of a superior player. It was a thrill all the same, and when Toronto Croatia instantly hit back to make it 3-2 the game was not only heating up but it was still very much in the balance.

The physicality continued - even increased - and Toronto Croatia struggled to make inroads. The chances came and their skill finally started to manifest itself as balls began skipping over the Athletic Club bar, opportunities mis-hit by just half an inch. The clock (ticking down, appallingly) struck zero but stoppage time continued for an eternity, mostly to Toronto Croatia's favour. Eventually, however, the referee blew play dead and the last place team in the Pacific Coast Soccer League had beaten the fourth-best team in the Canadian Soccer League 3-2.

The crowd cheered, more-or-less. There was never that much emotion in the grandstand. The public announce system played the grandest, most triumphant music you have ever heard, like the Athletic Club of British Columbia had not only bested Toronto Croatia but destroyed the Death Star into the bargain. Honestly, it would have been faintly laughable if not for the way the Athletic Club celebrated that victory. They embraced, they cheered to the heavens, they only belatedly remembered to shake the hands of the gallant visitors. When they posed for a team photo (yes, a team photo, there on the grass of Swangard, and no Toronto Croatia didn't have one taken) it was with barely-suppressed excitement. They seemed truly, genuinely delighted to have beaten their higher-profile opponents in what was only a meaningless exhibition.

To us, waving free tickets, it was a laugh on a lovely Friday night, a chance to see some unusual players, and a diversion from the big Whitecaps game coming on Sunday afternoon. But to those players, this was an important match on the biggest stage of their careers. I'd never want the Pacific Coast Soccer League to give up what makes it unique or the Canadian Soccer League to turn the west into some diminutive outpost of an Ontarian soccer empire, but let's hope that the long-cherished dream of a national CSL becomes reality sooner rather than later. Those players deserve it.