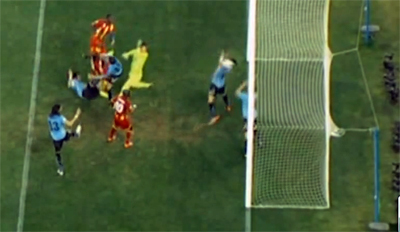 Uruguay - Ghana was brilliant, wasn't it?

For a team criticized for playing such a comatose style against the United States last week, Ghana actually showed some pep and verve. Uruguay, probably the pleasant surprise of this World Cup now that Argentina has keeled face-first into a pile of blow, kept up their successful and surprisingly entertaining strategy of "Diego Forlan, Luis Suarez, and why would we need any other players?" There were thrills, spills, and even a couple of goals to keep the Americans happy. Extra time, in particular, was a tribute to everything that was beautiful about soccer. Alan Partridge once famously referred to "liquid football!" some sixteen years ago; a phrase that was utterly meaningless in context and yet somehow perfectly describes extra time of Ghana and Uruguay. Shit! That was liquid football! Shut up, it was.

But I'm not here to write about beauty. I'm neither a poet nor Richard Whittall so that disqualifies me right there (I just seriously used an Alan Partridge quote, for one thing). I'm here to talk about controversy, and particularly controversy that shouldn't be in the least controversial. If you saw it you'll know what I'm talking about without further introduction. Late (and I do mean late) in extra time, the Uruguayans have given up a dubious free kick and are scrambling as Ghana has their sights set on a winner. The Ghanian sights are off and though they fire shots and crosses none of of them quite find their mark. But Uruguay has no clear defensive strategy, not an iota of cohesiveness. The ball kicks around and keeps finding its way back to Ghana. Another shot. Deflected, but Fernando Muslera was already moving to make the save and is now hopelessly out of position. Striker Dominic Adiyiah, who is only twenty years old but plays for A.C. Milan and knows something of scoring, gets a workmanlike head to the ball.

For all the mockery about soccer being a slow-moving game, at times it moves in slow motion. The very millisecond Adiyiah gets his head to the ball, Sebastian Abreu of Uruguay is standing with his leg in the air like a flamingo, having vainly tried to deflect the ball, with an expression of sublime agony on his face. The World Cup is over for Uruguay. Ghana has scored with no time left. They may as well pack up their bags. But Luis Suarez, guarding the goal line, with great coolness if no great form strikes the ball with his forearm straight into the relieved grasp of Muslera.

A blatant foul. As blatant a foul as you will ever see if you watch ten thousand matches. The Ghanians throw their arms in the air, the universal cry for "penalty, penalty!" They gesture to their arms, another movement that needs no translation. But their protests are unnecessary, as Portugal's Olegário Benquerença is refereeing and is nobody's fool. Suarez is duly sent off, as the Laws of the Game demand. Asamoah Gyan strides up to the spot for the easy penalty that will send Ghana to the World Cup semi-final. He takes his run up. He thinks about it a little too hard, he looks at the net rather than the ball, he thinks about how best to beat the talented Muslera rather than simply striking, and he blasts the ball over the crossbar.

In the ensuing penalty shootout Gyan shoots first and corrects his mistake - too late. His teammates produce limp efforts, with the aggrieved Adiyiah's shot so feeble that Muslera very nearly over-dove it before getting a foot to the ball. Sebastian Abreu, not so long ago doing a flamingo impression and on the verge of collapsing in emotional pain, buries a highlight of the night chip past Richard Kingson and Uruguay, not Ghana, emerge victors.

And now there is controversy. How? Suarez cheated? Well, he certainly did! So does every footballer who dives with his cleats up, or handles a ball that's gone a bit too far, or runs to take a throw that he knows belongs to the other team but he hopes the referee's assistant has missed. Six yellow cards were handed out in that match, three to each team. Cheaters, every one! And unlike too many other occasions, the referee spotted the infraction (though he hardly could have missed it) and called the situation precisely correctly. It was not Benquerença's fault, nor Suarez's, that at the supreme moment any footballer can face Asamoah Gyan was weighed in the balances and found wanting.

On an intellectual level, Ghana's defenders realize this. So they resort to other arguments. Suarez, they say, was on his honour not to cheat. Had it been the first minute rather than the last, nobody would have worried about an identical result. But because the situation was so dire, Suarez should have done more than break the rules and take his medicine. He should have restrained the instinct that drives any athlete at that level more than any other - that drives most athletes, in fact. Luis Suarez had less than half a second to decide how to react to the ball coming in his direction and he reacted as has been hard-wired into him: he tried to win. Had he kept his hands at his side and the ball had flitted past him into the goal, he would have at best been ignored, at worst been castigated, and certainly he would have been defeated either way. If he played goalkeeper, the odds were heavily against his side but they were not zero. So he played to win, and history has rewarded him for his cheek.

FIFA thought about suspending Suarez additionally for unsporting conduct and decided against it. Of course they did! FIFA gets very few decisions right but they got that one. Additionally punishing Suarez would be punishing him for cheating when it mattered instead of when it didn't, and that seems an odd sort of thing for an official to decide. Not that it is stopping a few armchair pundits from playing moralist and saying that, for doing what every other footballer has done and thereby lifting a nation of 3.5 million people on his shoulders and carrying them into ecstasy, Luis Suarez is a bad person.

If I were in Suarez's shoes, I would have reacted precisely the same way, and I wouldn't have lost a moment's sleep over it. I feel bad for Ghana, but they were justly rewarded for Suarez's foul and failed to win the game when they were given the most gilt-edged of opportunities. That, ultimately, is what matters.