A Book Review: The World is a Ball, John Doyle

Share All sharing options for: A Book Review: The World is a Ball, John Doyle 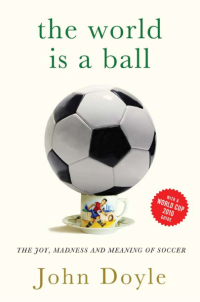 If you're reading this site, this book probably isn't for you.

To be clear, I feel that if you went through the time and effort to track down a blog that slightly over-obsesses about Canadian soccer and were interested enough in aforementioned blog to actually go through the articles and find a book review written by an overenthusiastic amateur about a book by a far superior writer, odds are you're a bit of a soccer wonk. And The World is a Ball is not a book for soccer wonks. It is two parts memoir, one part travellogue, with the beautiful game serving merely as the unifying motif creating what is a well-written, if not precisely relevant, piece of work.

The World is a Ball, by Globe and Mail television writer John Doyle, is no more or less than a writer's memories traveling the world for the game he loves. He attends international games on four continents. The matches themselves are described in sparing detail and the bulk of Doyle's attention is turned on the poetry surrounding the sport; the pageantry of the supporters, the bizarre orgies of joy and excess that surround human celebration at the highest level with tens of thousands of like-minded compatriots. It is a good book but know what it is when you buy it: a work of prose poetry, not incisive sportswriting.

If you are as much of a wonk as I think you are you're not going to learn anything from this book, and the explanations John Doyle gives of people, places, and events may strike you in spots as a bit facile. I approach European soccer without enthusiasm compared to my addiction to the North American game but even I don't need somebody explaining to me that in Euro 2008 Andrei Arshavin was really good, or that in the first half of the previous decade Zinedine Zidane was like God only moreso.

Approached on its own terms, the book isn't bad. Doyle can spin a yarn as well as anybody and I envy rather than begrudge him his documentary. I gaped at the errors of fact (one example: he refers to Canada gaining a win against Mexico in 2010 World Cup qualifying, and though the draw we actually got in Edmonton felt almost as good the standings would disagree) and shook my head at the errors of form (hey, did you know the Red Patch Boys are the only Toronto FC supporters' club worthy of mention? No wonder Boris Aguiar has such a glowing blurb on the dust jacket). He in spots opens old wounds particular to the obsessive Canadian soccer fan in his obviously sincere love for his native Irish national team and seeming ambivalence towards the Canadian, but when I disengaged my soccer brain I had an enjoyable ride

The cover of the book boasts a "World Cup 2010 Preview". The analysis is pretty much what you'd expect for a preview tacked on to the book as an afterthought and, of course, now has no value except as a curiousity (although Doyle gives the Dutch more credit than most of the world and comes off looking smarter than many professionals I could name). That's actually part of the reason I held off reviewing this book, clearly released to coincide with World Cup mania, until after the World Cup: to try and divorce it from the emotion and excitement of the game's biggest pageant. In hindsight, it's a good book, but not a spectacular one. It is purple rather than insightful. It is interesting, but not on an intellectual level. Like a gourmet meal, it tastes good but does not fill you up in the least.