A Canadian Vents About Africa

Share All sharing options for: A Canadian Vents About Africa 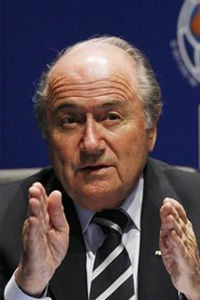 Nigeria and corruption. Two great things that go better together. Who can forget president Olusegun Obasanjo crooked attempts to remove term limits for the country's chief office, or the 2007 general election that proved to be a debacle of alleged fraud, certain violence, and enough chaos that if it broke out in downtown Toronto the OPP would bomb the entire city into the Stone Age just to be safe. Don't get me wrong, Nigeria is no Zimbabwe, but they're not exactly the straightest of straight arrows either.

Even worse, their soccer team sucks.

But unfortunately for the Nigerians, that failure has caused them to tangle with forces far more corrupt than they could ever dream of being. You see, in spite of that corruption Nigeria actually does have a president, Goodluck Jonathan, whose party was (probably) elected by the honest will of the people it attempts to represent. Like everybody else in the world Jonathan was watching the 2010 FIFA World Cup in which Nigeria slumped to a 1-0 loss to Argentina, a 2-1 loss to Greece after an undisciplined red card, and a credible 2-2 draw with fellow basement dwellers South Korea. Actually it wasn't that bad but Jonathan was unsatisfied. Nigeria was once an African footballing power, after all, and those results aren't exactly lofty. So Jonathan and his government announced that the Nigerian national team would suspend play for two years while it got its act together.

This has inevitably raised the ire of FIFA. FIFA also has a president, Sepp Blatter, but his democratic legitimacy is even worse than Goodluck Jonathan's as he is elected by a bunch of board room autocrats who cast their votes based on which candidates best line their pockets. And if there's one thing this president is afraid of, it's people, the ignorant common masses, sinking their fingers into the business of the beloved cash cow he calls international soccer. So FIFA has laid out the law to Nigeria. If you leave, we will expel you and you can go dick around with the NF-Board "countries" for all we care. Remember, this is the same organization that has allowed the African federation to ban Togo from the African Cup of Nations just because they left a tournament early on account of a little thing like being ambushed by rebels and having team members assassinated. They've also bounced Iraq in and out of FIFA and threatened Brunei with expulsion just because they put national priorities like security and independence over obeying every little whim from Zurich.

In short, these guys are scumbags.

FIFA's edicts against political interference are the least defensible part of a pretty indefensible organization. It is a ban against grass-roots reorganization, against sacking the CSA, against football fans actually trying to do something about this corrupt morass that is the ruling body of the game we love. Well, why wouldn't FIFA enact such a rule? Who has more to gain from the current structure than the organization at the apex of it? It is natural that they would try to put their own greed ahead of such trifling things as "democracy" and "the rule of law", because there aren't many people out there with the stones to rule themselves out of international soccer potentially forever. Even I would look askance at us actually sacking the CSA only for FIFA to threaten us with spending the next thirty years playing Zanzibar.

Uruguay and Ghana are about to kick off. A terrific opportunity for the last African team in the World Cup to advance deep into the tournament after a tremendous upset by the Netherlands earlier this morning. So when you watch this, take a moment to remember Ghana's African brothers Togo and Nigeria. Close your eyes and listen to, if you can hear it over the vuvuzelas, the sound of cash flying into the pockets of a host of untouchable kleptocrats at the top of international soccer. And remember that their contempt for you personally is so considerable that if you ever tried to change soccer in your probably-democratic soccer, FIFA would scorch your earth and try to ensure you had no soccer left to save.