World Cup: It's Not Contrarianism when Everybody's Doing It

Share All sharing options for: World Cup: It's Not Contrarianism when Everybody's Doing It 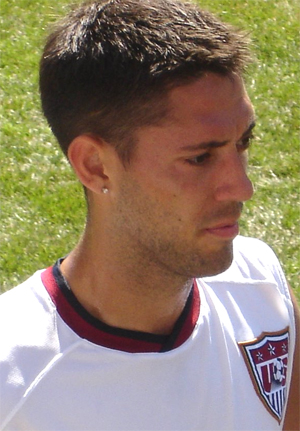 I don't write about the World Cup much in this space, for a number of reasons. First off, this is a Canadian soccer blog and Canada's not in the World Cup, so I'd kinda be abandoning my core competency as the corporate types put it. Second, what, am I going to add something to the discourse? It's the World Cup! It's not like when I blather on about FC Edmonton and I'm the only one talking about it. The Internet is currently 96% World Cup content by weight, so what am I going to add? Uh, that Messi's pretty good, isn't he? Please.

I did, however, have one World Cup-related tidbit I wanted to get off my chest. As anybody who is functionally literate knows by now, our deadly rivals in sports and in life the United States have been drawn in the same group as Mother England, parent state of the glorious empire that gave birth to our beautiful nation and home of the monarchy we still call our own. Canadians have traditionally had an affinity for the English soccer team, partially because of our national history and partially because they're essentially the Canadian team on a larger scale: like us, they're lovable losers who face immense expectations which they never,ever live up to. When they succeed, which they rarely do, it is more off of heart and grit than skill. And their entire soccer memory revolves around one moment in their distant past when they actually reached the promised land they have spent generations since aspiring to. Also, Owen Hargreaves isn't on the team this year, which takes care of one problematic factor for the Canadian.

So, naturally, I'm cheering for the United States.

I was all excited about my American sympathies. The United States is another country where soccer barely registers on the national consciousness and yet their media is so tied into ours that when the American team does well, as it did in last year's Confederations Cup, the surge in interest carries over the border. Even people asking "huh, the American national team is pretty good, why is ours so shit?" is more attention than the Canadian national team usually gets and if the sight of Sam's Army cheering the Americans along motivates people to come out with the Voyageurs the next time Canada's in town, then that's brilliant. Of course we should cheer for the United States! If the Americans do well, it can be nothing but good for Canada, and besides they're a likable team of hard-working, modest men (as well as Landon Donovan) given no chance by the inbred cadre of European-based soccer elitists.

It seemed like a terrific post until I noticed that, in true World Cup fashion, everybody else had already written it. The Canadian guys went in the tank for the United States back inMay. On the Voyageurs board, hotbed of both Canadian soccer support and old-school European-centric attitude, support for the Americans runs about fifty-fifty. Duane Rollins, who I may never have agreed with before, is undecided-leaning-United States. Even Ben Knight wants the Americans to go all 1776 on the English, and if Ben Knight is rooting against the English the rest of us should probably just give up.

How am I supposed to be a contrarian now?

This outpouring of (tepid, somewhat self-conscious) support for the United States is, as far as I can remember, unprecedented. I cheered for England in 2006, and so did many others. The horror of that penalty shootout with Portugal, in a tournament where England had for once played up to its reputation, is a moment that still resonates in my mind and I'm sure in that of many of my readers. In spite of my reverence for Paul Peschisolido, when I remember David Seaman it's not for robbing Pesch blind in the FA Cup in 2003 but for the previous year and that other thing he did. My Canada-first-England-second cred is pretty solid, and I'm not alone, but the country is swinging the Americans' way. There's an awful lot of "I usually cheer for England, but this time..." out there.

It's not like this is a particularly unlikable English team. All the media hype and the WAG factor and the focus on a few stars in the tabloid press... none of this is new. It seems to me that this is just more evidence of shifting priorities among fans of Canadian soccer. Whether it's because of MLS and Canadian success there-in or simply increasing awareness of the fact that we play soccer too, Canadians are paying more and more attention to their own backyard. You'd be hard-pressed to say that soccer in general is more popular in Canada; registered players in Canada actually decreased by nearly 8% last year. But we're looking more and more to our own professional ranks instead of across the pond: even the second division in Canada is getting more attention than it used to. It's not so long ago that Swangard Stadium never sold out and the Montreal Impact were playing in front of 9,000 mostly empty seats atClaude-Robillard.

And when you think of soccer in Canadian terms, cheering for the United States just makes sense. Are we finally getting past our collective fetish for "the old country" in Canada? I think it's finally happening. Very slowly, but it's happening all the same.