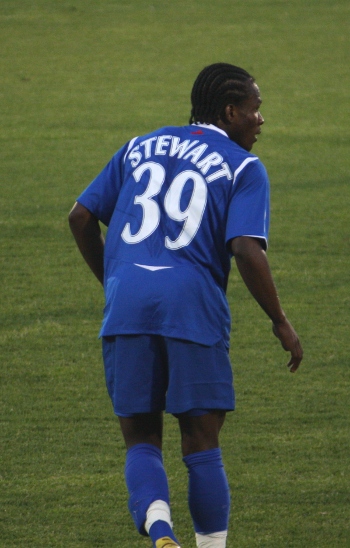 This is one of those nights where it hardly seems to be worth talking about the game.

The match was utterly dire, a bore of a scoreless draw between two clubs that could not possibly have cared less. The Whitecaps, playing predominantly a first team, came out like they had nothing to play for and knew it. The Toronto regulars were similarly disposed. Less frequent visitors to both lineups, like Philippe Davies for Vancouver and the TFC Academy kids, had a lot more heart and a lot more hustle but less skill. The catastrophic weather, with levels of rain that would make Vancouver blush and a pitch so slippery the Blackhawks and Islanders later skated on it, also inclined the veterans towards conservatism, and so boredom reigned.

I thought Marcus Haber deserved his red card. From where I was sitting at BMO Field, he began the slide after Toronto's player had got rid of the ball, had his spikes up, and was generally launching an utterly reckless sliding tackle from a player who ought to know better. On a level I was relieved because it meant I wouldn't have to watch Marcus Haber any more, but on another level it shattered Vancouver's already slim chances of grabbing a goal. I thought that playing Cornelius Stewart and, later, Randy Edwini-Bonsu alone up front after Haber's ejection was overly conservative on Teitur Thordarson's part. But two records remain standing as a result of that conservatism. The Whitecaps complete an undefeated Voyageurs Cup with no wins, no losses, and four draws, and Toronto FC completes an actually triumphant undefeated campaign where they never conceded a goal.

As you'd know if you read this site (and if you don't read this site how did you get this far?), I went to Montreal and Toronto for the away legs. In the course of my travels I hit Bar 99 with the Montreal Ultras after that particular disappointing draw. I hit the Duke of Gloucester with U-Sector to watch Canada take on Venezuela, and after this match I was snared by a Red Patch Boy on my way out of BMO Field and went to Shoeless Joe's for a thoroughly enjoyable post-game. With apologies to the North End Elite and Tribal Rhythm Nation, I've spent more time around away supporters than half the supporters do the last two weeks.

And, you know, it's the damndest thing. When I was in Montreal I laughed with the Ultras and talked about how, whatever our differences, one thing we had in common was that we all hate Toronto FC. Down at Shoeless Joe's, I laughed with the Red Patch Boy who brought me in and we agreed that, however many differences we have, we both know that we all hate the Montreal Impact. I can imagine Montreal and Toronto supporters commiserating over a beer and saying that, for all their many disagreements, they know that at least they're not fucking Southsiders. 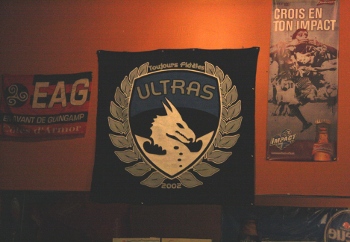 It's easy to forget for those of us who spend more time trolling the discussion boards than actually meeting with our fellow supporter, but ultimately, we're all coming to matches for the same things. We want to hang out with old friends and make new friends and sing and chant and make a ruckus and cheer our team on to victory, and with all of that common ground the colour of laundry we're cheering for is really a very minor detail.

I don't want to get too maudlin here (although I'm writing this with a fair bit of liquor in me), but I think that we sometimes exaggerate the rivalries forming between us supporters groups. A bit of heat is a good thing. A Whitecaps game, to me, means more when it's against the Impact or the Timbers than it does against AC St. Louis or the Carolina Railhawks, and I wouldn't have it any other way. But that's not an excuse to go around picking virtual fights with the Timbers Army or the Montreal Ultras and generally being an asshole. There are few enough Canadian soccer supporters in this country as it is without dividing ourselves further and driving each other away with a constant avalanche of hostility and abuse masquerading as rivalry.

There's nothing wrong with giving each other the gears, or building those rivalries. When I call Toronto FC supporters "plastics", it's a shot but it's meant in good spirits. When Toronto FC supporters call us Whitecaps fans pot-smoking hippies, I can take it in the same light. Nobody is saying that everybody needs to join hands and sing and dance, or even particularly get along. Just that we can't let the comforting veil of Internet anonymity divide our too-small community and turn us all into complete cocksuckers.

When I whine like this I'm not so much referring to guys at usector.ca talking shit about their opponent du jour, or the pro-Montreal blogs saying pro-Montreal things, or similar internal affairs. I'm talking about the fact that even the Voyageurs forum has, in some parts, become a cesspool for intra-club rivals sniping at each other. I'm talking about the fact that, more and more, the sort of soccer fan you are in this country depends on which of the big three clubs you support, and if you're a neutral (or, God help you, a third-division supporter) then you'd better just get out of the way before you wind up crawling under the bed and sobbing at how stupid a bunch of otherwise intelligent people could be.

It bears repeating. When we actually meet up, be it under the national team banner or because some of us are going to support our club on the road, we tend to get along pretty well. Almost every story you hear about particularly infamous club supporters runs something like "yeah, on-line he's a real asshole but he's pretty cool in person". It's early days for Canadian soccer fandom, and for the most part we don't actually hate each other quite yet. 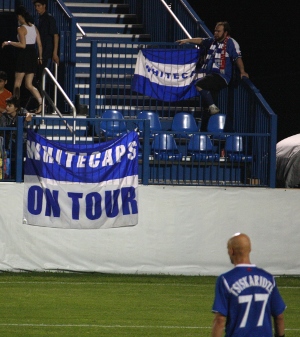 There is, after all, quite a large gulf between rivalry and hatred, between wanting Dwayne De Rosario to get hit by the team bus and wanting the supporters to get dragged under the wheels with him. I hope that we never bridge that gulf, because one of the best assets of the Canadian soccer community is that, for all the countless differences between us, we are a community. The Canadian soccer world is united in a way that most countries can never be because, ultimately, we're all in the same boat. We're all cheering for a team ranked sixty-third in the world when most of us think that's too high. We all support clubs that are in leagues of dubious stability and we all have a history of watching teams we loved suspended or killed off. Whether you root for the big bad MLS boys in their soccer-specific stadium or the Canadian Soccer League team whose games are sporadically canceled because the pitch has plywood under it, you're an underdog.

The success of Montreal, Vancouver, and Toronto is terrific. The future success of Edmonton, Ottawa, and others is something to hope for. But if that success comes at the cost of fracturing the Canadian soccer world and destroying the unity that brought us the Voyageurs Cup in the first place, it'll be of questionable value. For now, I'll rejoice in the fact that when we gather, nobody can celebrate the beautiful game like a Canadian regardless of what colour he wears. I'll cheer for Toronto in the CONCACAF Champions League not because I like them but because they're Canadian and that's what counts. I'll adopt the Red Green philosophy: "remember, I'm pulling for you. We're all in this together."

And next time some opposition fan on some message board says something so stupid and inflammatory it can't help but be destroyed in rhetorical rage, I'll take a deep breath and I'll leave it alone. And I hope you will too.