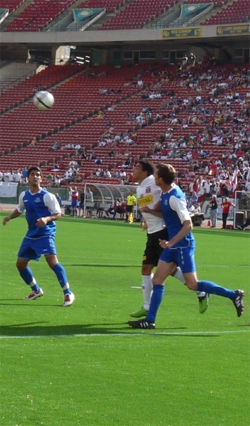 Last night, sitting in my office, I put up a somewhat agitated post on Twitter. "Okay, FC Edmonton," I said. "I'll make you a deal. If you draw Colo-Colo or better, I'll get on the bandwagon. NOT ONE SECOND EARLIER."

Well, they lost. Yet here I am. World Cup? What's that?

FC Edmonton being what it is, there was no broadcast of any sort of the game, be it audio or video, online or otherwise. Updates came courtesy FC Edmonton's own Twitter account and, after the fact, eyewitness reports in Edmonton newspapers and on the Voyageurs forum. The Edmonton Journal buried their article on the game to the extent that it doesn't even show up on their soccer page. You had to be looking to see anything about this, and judging from the announced crowd of only 5,573 not that many people were looking. The crowd was predominantly Chilean, cheering on Colo-Colo with full voice, while the nascent FC Edmonton supporters section received the odd looks and ignorant comments that is the lot of any trace of supporters' culture in this country.

With fewer than 6,000 fans the club can't be anywhere near breaking even on the million dollar payroll and the million dollars they spent bringing Colo-Colo to town (Terry Jones of the Edmonton Sun estimates the club's loss on the match at "well into six figures"). Moreover, Colo-Colo has replaced FC Edmonton as Vitória's friendly opponent, allegedly on account of a team in eastern Canada welshing on a friendly with the Chileans and the club having guaranteed Colo-Colo three matches in Canada. To the extent that these friendlies are being held to prepare the team for a 2011 campaign, they are doomed to be a bit less effective now.

That's the obligatory FC Edmonton bad news. For once, though, the good news outweighs it. First and foremost is FC Edmonton's play. Thrashing the Montreal Impact reserves 3-0 was impressive, if hardly earth-shattering. But a 4-3 loss to Colo-Colo do the Edmontonians even more credit. It was Colo-Colo's first game of their 2010-11 campaign, and it showed, but it doesn't take away from the result. The game was somewhat sloppy and the Chilean champions were hardly overexerting themselves on the turf of Commonwealth Stadium, but all the same by all accounts FC Edmonton played them hard, took an early lead, and endured the Chilean fightback with great composure. The club has been bolstered by a few additional players, including former Ajax trainee and Canadian youth player Matt Lam, and while it's hard to judge form without actually seeing the team there appears to be nothing but good news.

You'd have to be awfully optimistic to believe the great play will continue, of course. Phillip Araos of Colo-Colo bluntly said that he'd watched FC Edmonton practice and they weren't that good. Their rosters of aging Dutchmen, a few promising players, and metro league plugs is still the same roster, even if Matt Lam has lent it some more skill and legitimacy. Nobody disputes that Dwight Lodeweges is a good coach but if he can mold that unit into something that'll be competitive at the NASL level he's a bloody miracle worker. But two games in they don't seem to be as bad as the naysayers - and I was a very loud one - were saying.

Moreover, the attendance, while disappointing, is hardly devastating. The friendly schedule was only announced two and a half weeks ago, so there wasn't a great deal of time for big ticket sales to materialize. 2,106 fans came through the gates of Foote Field for Edmonton's first friendly against the Impact reserves, a Wednesday evening game against a completely inglorious opponent. This isn't a fantastic number but it was more than the opening night draws of USSF D2 Carolina, Miami, and Baltimore and the 2010 averages of Miami, Baltimore, and Minnesota. If FC Edmonton draws 2,100 fans a night in 2011, they won't make money but they won't be the NSC Minnesota Stars either. When the team is playing real games against real teams and has some publicity from their friendly season, though, attendance should increase.

Best of all, even with the financial dunking they've taken so far the owners seem non-plussed. In Terry Jones's article linked above, co-owner Tom Fath seems at ease, if not exactly falling over himself with joy. Things are not going that well. FC Edmonton is by no means a certain success. But there have been a few small victories, and every great movement starts somewhere. 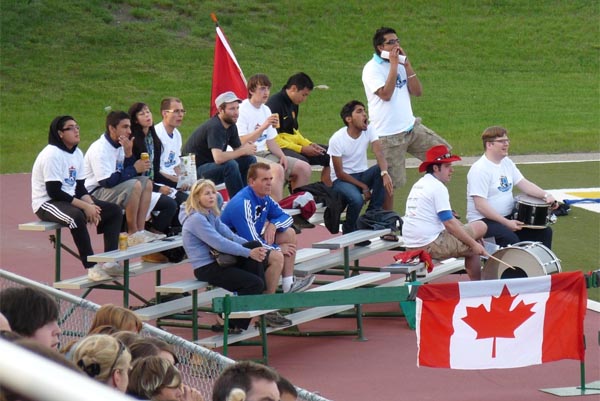