Diving, the Only Mortal Sin

Share All sharing options for: Diving, the Only Mortal Sin 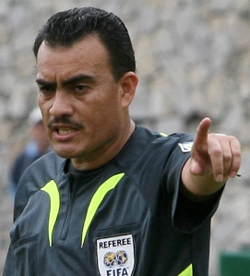 My attitude towards diving is shared by many of you. I hate it, except when my team does it.

Well, perhaps I should refine that statement a bit. My team doesn't dive, you see. Each flop, each plunge into the grass, was clearly entirely the fault of that blatant foul by the opposition and not at all by our enthusiastic player gunning for a whistle in a vulnerable area. What would appear to the untrained eye to be shameless embellishment is simply an elite athlete being thrown off his balance by a less talented ruffian who's probably trying to end his career with unprovoked dirty play.

So I guess I can understand the reaction of Italian supporters to this morning's World Cup fixture, when Daniele De Rossi had his shirt tugged by kiwi Tommy Smith to pull him backwards and reacted by hurdling forwards as if a mine had gone off in a bad war film. "Well, by the letter of the law, the shirt tug was a foul," they say. By the letter of the law De Rossi should have received a yellow card for embellishment so incompetent he couldn't even fall in the right direction, but that's a distraction from the real issue. A rational person would say that whatever harm little shirt tugs cause to the game, it is nothing compared to the harm of awarding a dozen penalties and two dozen free kicks in a World Cup match because you decided to call "the letter of the law". But if referee Carlos Batres wanted to call the Laws of the Game for ninety minutes then, well, good luck to him!

Except, of course, that Carlos Batres didn't call the Laws of the Game for ninety minutes. He called one little tug and ignored the rest from both sides. Not a single card for simulation (and not even the most biased observer could deny there was diving a-plenty in that match). After sustaining a knock, he sent New Zealand centre back and captain Ryan Nelsen off for treatment then immediately issued him a yellow card for timewasting, which... was a new one on me. One can hardly blame the Italians for embellishing every little thing, since the referee was so clearly overwhelmed by the occasion. Were I in that position, I can't deny wanting Canada to flop like eleven red fish. But what an infuriating game to watch! New Zealand robbed of what ought to have been a 1-0 win by something that has no place in this game, celebrating a famous draw against the defending world champions and yet an even greater triumph has been stolen from them by perfidious officiating..

New Zealand still has a chance to advance to the knock-out stages and immortality. On form, Slovakia could beat Italy and New Zealand could draw Paraguay. Neither is likely but both are possible. Even if they go down without further ado, they'll have made their statement. Nobody is laughing at Oceania now, but they could have been gaping in awe. The sooner we can replace referees, the happier we all shall be.