Toronto - Vancouver Preview: It Doesn't Matter (Except That It Does)

Share All sharing options for: Toronto - Vancouver Preview: It Doesn't Matter (Except That It Does)

The Voyageurs Cup is over. After the match tonight, Toronto FC will be presented with their justly-earned championship trophy even if they somehow contrive to lose this game by sixty. There's more of a chance of that than usual, given that Toronto has called up seven TFC Academy kids to at least observe proceedings tonight. But even if it did happen it wouldn't be in the least relevant.

This being Canada, there's still controversy over this meaningless game and Toronto's possible decision to play a bunch of its youngsters in a game that has no relevance to them. Okay, there's not really any controversy, just a few blindly anti-Toronto people saying their usual blindly anti-Toronto nonsense and a few blindly pro-Toronto people blowing it up into something more than it really is. But it still merits comment, on account of all the actual controversy last year when Montreal played its scrubs in a game irrelevant to them but still very relevant to the country.

Of course, this game is nothing like Montreal - Toronto last year. The tournament is decided this time around and Toronto has every right to play whichever useless pieces of Academy detritus it desires. But I hope they do run out a strong lineup, because this game is on Sportsnet (East and West) and as such is something of a showcase for soccer in this country. It's true that Sportsnet has always given soccer short shrift, and restricting it to East and West when the two competing teams are in the Pacific and Ontario regions indicates once again that they don't really care about the game. But people from Edmonton or Halifax channel-flipping and ending up on a tepid BMO Field half-heartedly cheering an avalanche of guys only the hardcores have ever heard of as two teams fight not to get embarrassed by the other... that's not a very good sales pitch for soccer in this country.

Besides, I'm selfish. This is the last time Vancouver will ever face an MLS team in a competitive match before they move up to MLS themselves. There's a certain joy in giant-killing that's lost when you simply beat a rival that's an equal to yourself. But that giant-killing only counts if the giant hasn't tied both hands behind his back. I'm sure that the TFC Academy players would be fired up to play the Whitecaps, and I'm also sure that they're highly competent. They can probably stand up to a Vancouver second eleven better than most non-observers like me would give them credit for. But I'm also sure that if the Whitecaps beat them that's not an accomplishment, and that if they beat the Whitecaps... hoo boy. 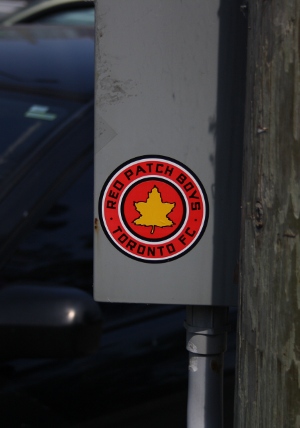 We don't actually know how many of those seven Academy kids will play, yet, or if any of them will start, or how many of them will even be on the bench. We don't know if Dwayne De Rosario will get a half, or the start, or a night off. Preki plays his cards irritatingly close to the vest. We don't know how good the support will be. It is a Wednesday night and for a meaningless game, will some of the supporters stay home? Certainly some of the casuals are (and who can blame them?). Will the cheering be as raucous for second- or third-tier players in a meaningless game? Heck, from what they say Toronto fans don't even hate the Whitecaps that much, which would take away that little zest that can fire up a crowd in an otherwise dull game (but also means that I may not get beaten up unless I get drunk and start shouting about how plastic all the supporters are, and from what I understand of BMO Field beer that's an expensive proposition).

I want the Whitecaps to win, because they're my team and I always want them to win. But it doesn't matter if they lose. It's sort of nice, having all the pressure off. I mean, boy, it would be embarrassing if TFC Academy whooped us but it wouldn't actually affect anything. I can walk and talk and watch and smile and generally have a good time, and if Vancouver somehow pulls the rabbit of a victory out of their hat then I can sing and cheer and have a gay old time. Either way the game's at beautiful BMO Field, which I've never been to before but seems like a lovely facility, on what will either be a lovely night or a thunder-and-lightning hellstorm fully suitable for football drama, depending on which weather report you believe.

Even though I probably shouldn't, I'm looking forward to it. The Whitecaps might lose, but their supporters can't, and that's a rare thing in sports. Best to embrace the moment.