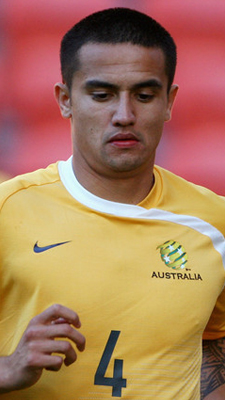 Australia and Canada have a lot in common. Mid-sized, mature former British colonies, once culturally isolated but now tied more and more into the world village. They share an ambivalent attitude towards their past and many of their traditions. They share many ambitions, including a disproportionate desire to punch above their weight in international sports. Australia's been rather more successful in most summer sports and Canada rather better in most winter sports, which is pretty much what you'd expect if you based your expectations on climate and culture. But their soccer teams have a common thread as well, and that is a recent humiliation on the international soccer stage.

Canada's came in May, in Buenos Aires for the Victoria Day Massacre. 5-0 we went down to Argentina and it was every bit as ugly as the scoreline would suggest. One of the first Canadian friendlies in many years to be nationally telecast, it advertised to the entire country just how far we had to go before we could compete with the elite soccer nations. There was some promise there, a few young players who looked poised, a few old players who looked dreadful but are mercifully on their way out. There were no excuses, though. We saw what happened and we took our medicine. Many of us even expected such a debacle.

Australia's came this very day in South Africa. They went down 4-0 to Germany and oh, it could have been worse than that if Germany had cashed some of the five-bell chances that went wanting. This time it was on display for the entire world to see, in front of one of the largest audiences Australian soccer would have ever known. Their record defeat of 8-0 actually came against South Africa (fifty years ago) so it is fitting that it would be the site of their greatest, if not most numerically significant, loss.

But Australia has an asterisk. Mexican referee Marco Antonio Rodríguez lost the plot in the second half, missing what seemed to be an obvious penalty on an accidental German hand ball and then minutes later having star Tim Cahill sent off with a straight red for a foul that appeared to be a reckless yellow at best. Rodríguez also booked midfielder Carl Valeri for seemingly nothing at all, although he let Valeri get away with a yellow-card tackle later as though to even accounts. This isn't news from a CONCACAF referee, who are nowhere near the standards of UEFA or CONMEBOL and never have been. It would take both a cynic and a fool to think that the fix was in, as Germany was already leading 2-0 when the calls became sketchy and Australia seemed to have no chance of fighting back.

Yes, Australia looked very nearly as bad against Germany as Canada is said to have looked against Argentina. There was a brief flash from the Socceroos in the first ten minutes but from there on it was one-way German traffic. On Lukas Podolski's opening goal the Australian defense was caught running to the ball like a team of thirteen-year-olds rather than picking up their men and at all times the passes from what is not a particularly talented German team sliced the Australians to pieces. Australia stuck to formation far too rigidly and played with the energy, enthusiasm, and incompetence of amateurs against professionals. In no sense did Australia pick up even an iota of credit for this game when they had all eleven men on the pitch, and as soon as Cahill was sent off what coherence and ability there was dissolved into a melange of frantic, futile individualism.

The discussion will inevitably surround Rodríguez's decisions, because that's what discussion does. Without Cahill and with humiliation burning in their minds, it would take a brave man to predict an Australian point against a surprisingly strong-looking Ghana side. And the great peril for Australian soccer is that the controversy will overshadow just how poorly they played.

Every so often, the lesser powers such as Australia need a reminder of how far they have to come. Canada got their wakeup call against Argentina and may well emerge better for it. Indeed, since that resounding defeat we've heard that Junior Hoilett is more enthusiastic about representing Canada and the "B" team played a strong, unusually coherent game against Venezuela. It's early yet but so far in spite of the lopsided result Canada is coming out of Argentina better than they went in. And everybody in the Canadian soccer world, from Dr. Dominic Maestracci to the lowliest fan, knows how much improvement we require and can dispel any illusions about "misused talent" that may have lingered from the Dale Mitchell era.

Will Australia be so fortunate? Will they concentrate on refereeing robbing them of a penalty and their best player instead of the dreadful play that put them in a position to need that penalty and that game against Ghana so desperately? Early indications are that the referee is the talking point. Let's hope for the sake of our kinsmen down under that sober second thought produces more productive reflection.