Share All sharing options for: Vancouver - Carolina Post-Game: I'm Sorry, Did I Stutter? 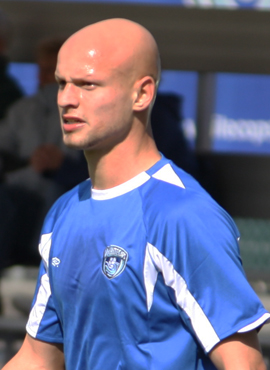 Edit: well-traveled Canadian soccer journalist Duane Rollins informs me via Twitter that the stutter-step Barbara took - where he hesitated rather than came to a complete stop - is still legal. The irony of criticising a referee for not knowing a rule when I may not have known the rule myself is not lost on me.

I've got a confession to make. I didn't actually watch the first half of the match between the Whitecaps and the Carolina Railhawks. You see, the game was being played simultaneously with the third period of Philadelphia - Chicago, Stanley Cup finals, game six, and there is still enough hockey-lover in me that I wanted to see the Stanley Cup awarded (which eventually it was). When the first few Blackhawks had finished skating around with their prizes I flipped on the live feed of the Whitecaps game just in time to see the ball placed at centre for the start of the second half. And the two teams battled it out for forty-five minutes, and nobody scored, and the Whitecaps, who draw more than Bob Ross, picked up another single point for their growing collection.

There was some second-half excitement. Doudou Toure got in about five minutes of very exciting action before being substituted out after an unfortunate clash of heads. Marcus Haber did not score but finally began to look useful, which is a case of awkward timing given that this was the last home match in his loan stint as the Whitecaps now embark on the road for five (!) matches and Haber will return to West Bromwich Albion at the end of June. Martin Nash played a whale of a game defensively and probably left his feet more often in that half than I've seen him all season. It wasn't bad, really, but not much went on.

Which is a pity because all the action was in the first half. Ansu Toure's second goal of the season, for example, built off of a splendid passing play and tapped into the back of the goal, the sort of play that the overly-fancy Whitecaps have attempted all season and actually pulled off maybe once. Or Carolina's goal, which is drizzled in a simply stunning amount of controversy. In stoppage time at the end of the first half, Zurab Tsiskaridze was rocked going up for a ball at centre and spent some time down in a heap without drawing a foul as the Railhawks attacked the other way. The ball was worked into the area by Etienne Barbara of Carolina, who had it out with Nelson Akwari in a running battle through the area. At length, Barbara went down and referee David Barrie pointed to the spot, as they say, without hesitation.

The fans thought that Tsiskaridze had been fouled. The fans thought that Barbara hadn't. So imagine their hooting and derision as Barbara stepped up to take the spot kick, and imagine the derision that turned into disbelief and open horror as Barbara performed the infamous paradinha, the stutter-step penalty move that has been popularized by South American footballers but spread around the globe. It is sometimes effective but frequently considered unsporting and against the spirit of the game. But lots of things are unsporting and against the spirit of the game; what's important is that the paradinha has also been illegal since May. It wasn't exactly a headline-grabbing rule change but one hopes that, oh, I don't know, a professional referee would have been aware of it.

Personally, watching the replays, I think that Tsiskaridze had the misfortune to be hurt on a fifty-fifty ball and wasn't fouled (he returned to play in the second half and seemed no worse for wear), and that Akwari was grabbing Barbara enough that a penalty was a realistic, if a slightly soft, call. But the botched paradinha stuns me. The rulebook says that, if a player attempts the stutter-step, he should receive a yellow card and the kick should be retaken. Not exactly the end of the world. Etienne Barbara is a professional striker, one of the best players on quite a good Carolina team, and a Maltese international. If given the chance he probably could have converted a second penalty and he doesn't play rough enough for a yellow to be a serious issue. This game probably winds up a 1-1 draw all the same.

But oh my god. David Barrie gets paid cash money to officiate soccer games and he doesn't stay up-to-date on changes to the rules of soccer. Screaming about second division refereeing is an extremely popular pastime (and one in which I have indulged from time to time) and this is one of the reasons why. Too many of the referees seem less like professionals and more like enthusiastic amateurs - "oh, you want me to come ref a game Wednesday? Cool! I'll hose off my cleats!" One can almost picture the referee and his assistants at half sharing orange slices like six-year-olds in a youth league, such is the amateurism. I will miss a great deal about the second division when Vancouver moves up to MLS - the stadium, the fans, the atmosphere, the exclusivity and snob value of cheering for a club most of the city doesn't care about - but one thing I will not miss is the refereeing. Yes, the jump to Major League Soccer and, with it, major league officiating will doubtless ease many a worried mind...

Okay. So, while "does not know the rules" is a fairly major complaint, it turns out every soccer fan in the continent has something to hate about their referees. Actually, it's more like every soccer fan in the world, and I can think of a few Irish fans who were shouting obscenities at their monitors every time I bitched about a referee not knowing what the rules are. Benito Archundia may be the worst referee in the world but he's also good enough to serve at approximately one hundred million World Cups. Bad refereeing is a universal problem, it seems. One from which there is no escape.

Seriously, though. The paradinha has been illegal for three weeks. You'll let me have my irrational bitterness on this one, won't you? Pretty please?