Hearing the Noise of the Lake Side Buoys: the USL PDL Season Opener

Share All sharing options for: Hearing the Noise of the Lake Side Buoys: the USL PDL Season Opener 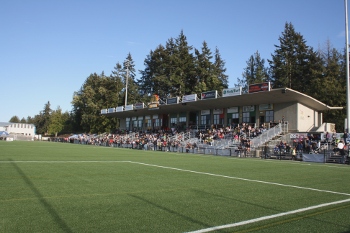 This is majestic, picturesque, and ironically-named City Centre Park in the quaint little burgh of Langford, British Columbia. It is everything to hate about the modern Canadian soccer stadium. Seating about 1,700 with standing room well over 2,000, the stadium boasts a plastic pitch so the rugby players can use it, lines for multiple sports badly hidden by mediocre paint jobs, one restroom in the form of a porta-potty at the northwest end of the stadium, one beer garden with a thirty-minute line at halftime, and because politicians are idiots it's out by an industrial park in a far-flung suburb of Victoria.

God, what a fantastic place to watch a soccer game! The sun is shining, the birds are tweeting, there's a little man-made lake at the east end of the park which is simultaneously incredibly twee and incredibly cool. The plastic pitch is still new enough that the game is quite enjoyable on the surface, security guards aren't uptight bag-checking assholes, and the fans have the good-spirited nature of people who are watching a semi-professional soccer game in the middle of nowhere and just having a whale of a time.

Last night opened the 2010 USL PDL season, as my boys the Vancouver Whitecaps Residency took on the hometown Victoria Highlanders. Most of the Whitecaps fans were at the actual Whitecaps game in Burnaby against Crystal Palace Baltimore, but as a Victoria resident who's working Sunday getting to that game was an impossibility. Watching the kids seemed like an enjoyable second choice, so I threw on kit and scarf and walked to the Bard and Banker Pub, downtown gathering place for the Highlanders supporters. The Highlanders supporters club is the Lake Side Buoys (geddit?), who congregate in the Bravehearts section at the east end of the pitch. There was a bit over a dozen of them at the game on this occasion, as well as a healthy four digits attendance from the normal people. In spite of their modest numbers, the Highlanders supporters are a terrific bunch: some of them were be-kilted, there were bagpipers in attendance, and they had a pretty healthy songbook for a small group of people supporting a team in its second season.

The match itself was a far more interesting one than the 0-0 borefest at Swangard Stadium across the water. The Whitecaps Residency team, by its very nature, is a rather odd bunch. These aren't guys who are there to win games, really: they're playing to catch eyes on the Vancouver senior team and play in MLS someday. The roster changes more freely than most in PDL, and tactical priorities sometimes take a back seat to the desires of the first team. The perhaps inevitable result is that the Residency team, too often, plays like eleven individuals rather than a cohesive unit. The fact that the Residency added a new coach (on an interim basis) just a day before this game cannot possibly have helped them.

The Residency team clearly had the more talented players, but the Highlanders had the better team. Not just in their ability to play as a team but physically: the Highlanders were an astonishingly big lineup, particularly at midfield and up front. Their big men didn't always have the pace to back up their size but their superior form made up for it. Only a few of the Residency players were able to cope with the big Highlanders attack. Central defender Jack Cubbon made a fan in me today: not only was he one of the few Residency players who looked interested in playing with his teammates, but he was the defender who could best handle the larger Highlanders. Cubbon is a pretty tall drink of water himself but he's also built like a string bean, and he did his best work playing the angles and forcing the Victoria attack into channels it didn't want to take. He was also just about the only guy on the Residency team who wasn't completely useless in the air, so naturally he was playing deep and covering the goal line on the corner that led to Victoria's first goal.

Individually, the two most skilled players on the field were both Residency players: Russell Teibert and Alex Semenets. But they were a study in contrasts. Teibert, the captain, played a roaming midfield role devotees of the Dwayne De Rosario oeuvre would find familiar. He was ridiculously talented on the ball and at times showed very good touch. He was also so short it was like the punchline to a bad joke, although to an extent he made up for it with great jumping ability. However, he was almost completely ineffective throughout the game. Teibert disdained working with his teammates for the most part, preferring to try to do it all himself against the far larger and more mature Highlanders players. He played through balls as if expecting a striker to be on the end of it without checking that the striker was there first. He took most of the Residency corners and wasted them all, and in general his distribution showed that he was incorrectly anticipating events rather than noticing where his players actually were. In spite of taking almost all the dead balls in the first half he was used more sparingly in the second while becoming invisible on the pitch to the point that for a time I thought he had been substituted. Teibert also shies away from contact. A man his size should avoid unnecessary collision, of course, but Teibert took it to an extreme, including charging at defenders as if expecting to be able to get by them, the defender holding his ground, and Teibert just bailing out without the ball in a brutally unforced turnover. 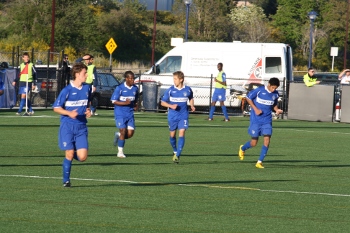 Semenets was far better. He combined Teibert's skill with the ability to use it as a team player. He reserved the right to take on the entire Highlanders defense by himself but was also willing to try and work with his strikers as well. He scored the Residency's first goal on a sterling effort: he ran a give-and-go with Teibert that resulted in Teibert actually reading where the play was going and knocking a terrific ball to Semenets. Semenets was at the corner of the area but that didn't stop him and he labelled a terrific strike that found the top corner, leveling the score at 1-1. Semenets was also responsible defensively and dominated the left side of the pitch for ninety minutes without appearing to tire, in spite of some physical abuse and picking up a knock around the forty-minute mark.

A few of the other Residency players stood out for reasons both good and bad. Goalkeeper Richard Causton got the start for Vancouver and showed some shot-stopping ability, including a penalty. His agility is certainly PDL standard, if maybe not USSF D2. His decision making on his distribution was sometimes bad and he was a very vociferous communicator with his defense: perhaps too vociferous. This is the sort of thing one only notices when standing six feet from the touch line in a PDL stadium; Causton is a classic grumbler, mumbling minced oaths about his defenders whenever the ball went up the pitch. Every goalkeeper does that a bit but Causton kept up a running dialogue throughout the first half when he was close enough for me to hear. Moreover, for all his shouting at defenders his instructions seemed sometimes contradictory and countered by good sense: on the occasion of Vancouver's first goal he ordered little Russell Teibert to mark a far taller man on the outside when surely an aerial man would have been called for while Jack Cubbon stood around the goal line in a maze of bodies, meaning that neither player was in their best element when the ball was delivered.

Teibert, in general, seemed to be a bit of a whipping boy for Causton. Whatever my complaints about the Residency captain, he picked up his marking assignments and put on an effective, if hardly elite, defensive performance. Causton may have just been upset about the mismatch between his smaller players and Victoria's oversized attack, but picking on midfielders is hardly the best way to address that.

Substitute striker Caleb Clarke also stood out in the wrong way. At 6'1", Clarke was a good tall choice against Victoria and has the speed underpinning that size. As soon as Clarke came in for Doudou Toure he became a target man for the Residency. But, for his size, Clarke was putrescent aerially, winning not a single one of the many headers I saw him attempt. Though good enough with the ball at his feet, Clarke was nowhere near Semenets, Teibert, or Toure in that department. Somebody like him has to be able to mix up Vancouver's attack, and Clarke was found wanting. 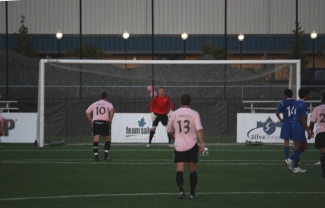 The game was chippy, and both sides picked up penalties. Victoria's came first, in the sixty-sixth minute. I missed the foul on the far end of the pitch, but the crowd howled in derision and the referee did not hesitate in pointing at the spot. Patrick Gawrys, one of the biggest and best Victoria players on the evening, took the kick from the spot after some scuffling and confusion. A poorly-struck spot kick resulted, near the middle of the goal, that Causton blocked easily. But there was enough power that Causton was unable to control the rebound and Gawrys followed up with an easy goal. Gawrys bagged his second hardly ten minutes later on a fine, well-built play from Victoria: the sort of thing that real teams can do even against more talented individuals like Vancouver's.

The Whitecaps penalty came late, and this time I did see the foul. Clarke had the ball coming down the left-centre into the Highlanders area, and the Victoria defender tried the classic shirt-tug to bring Clarke up short. Clarke, however, had a full head of steam, and whether he meant to or not the Highlander actually stepped up and into Clarke, putting his shoulder into Clarke's body and sending both players down in a heap. A particularly egregious penalty, and even the Highlanders fans near me admitted "that was pretty bad".

But Clarke was okay and Kevin Cobby took the kick from the spot. Effortless. Lower corner, and it was a 3-2 Highlanders lead. Vancouver buzzed for the rest of the game, primarily playing long balls to Clarke but getting a few legit chances: one that Clarke badly mishit near the site of his penalty and one from Russell Teibert, who seemed to have an empty cage waiting for him near the top of the box but put a shot through traffic wide.

3-2 Victoria stood as the final, and the better team won. But it was a good contest and one that involved some pretty good fans from the Highlanders, who sang and made noise that you associate with a far higher level than USL PDL. Even the soccer parents in the grandstand were more involved in the game than your stereotypical Canadian fan, applauding and following events with visible agitation. I know there are travel issues, and stadium issues, and all sorts of issues in the way of further growth. But if the Victoria Highlanders keep this up and they're not in the second division within five years, it'll be a disgrace.

Also, their supporters had a band going! How awesome is that? 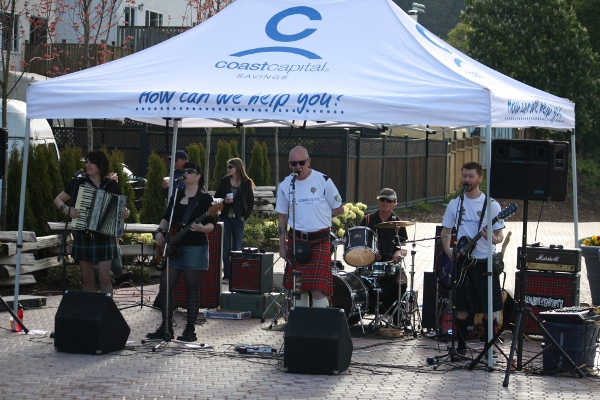