Share All sharing options for: Expanding the Voyageurs Cup 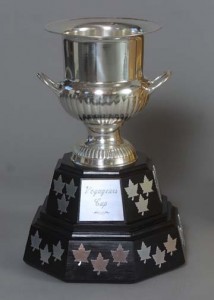 I disagree with just about everything Duane Rollins writes at the 24th Minute. That's part of the reason I read his non-Toronto posts so attentively: it's good to see an opposing perspective argued passionately and intelligently. Keeps me on my toes. But today my attention is focused on his new Western writer, Brandon Timko, and a subject near and dear to my heart: the expansion of the Voyageurs Cup.

Why so much interest in getting an additional collection of minnows and also-rans into a tournament that, as much as the diehards love it, does not yet resonate with the day-to-day public? Because a true Canadian Soccer League, as opposed to an Ontario league that assumes the name and style, seems to be a pipe dream. A pipe dream we all share but one which regardless has no chance of coming true. The Voyageurs Cup already exists. The Canadian Soccer Association is driving it with, from them, unaccustomed enthusiasm and ambition. It already rings truer among Canadian fans than the US Open Cup does south of the border, and not just because of the CONCACAF Champions League berth at play. If anything, the relatively insignificant Champions League is a neat opportunity that would come as a pleasant reward along with the real prize.

With FC Edmonton coming into the North American Soccer League in 2011, we seem set to have a four-team tournament until Edmonton goes tits-up (tentatively scheduled for 2012) and a four-team round robin isn't a grueling schedule. But Rollins is aiming higher than that. He wants the CSL, PCSL, and USL PDL teams involved, as well as local amateur sides. Western and eastern brackets to keep the costs down, with the winners matching in a two-match national battle royale for all the marbles.

It's a lovely thought. It would be like our own FA Cup, one which lacks the ancestry and pageantry of the older competition but which the larger clubs will be obliged to take more seriously and which the smaller clubs would, with fewer teams and therefore fewer tests of their mettle, have a much better chance of a glory tie against an MLS opponent or even taking the entire tournament in a stunning upset.

So now, in the time-honoured tradition of this space, I will tell you why it can never happen. At least, not in that form.

Those of you without a strong grounding in amateur American soccer leagues may need a bit of an explanation. The USL Premier Development League had its genesis as a summer league for American college players and those looking to catch on in the NCAA ranks. Ages are restricted and most teams operate on a strictly amateur basis. Even non-collegiate players go officially unpaid, as a semi-professional team would compromise the NCAA eligibility of its entire roster. The Victoria Highlanders and the Abbotsford Mariners, in Western Canada, operate along these lines, although for obvious reasons they look to CIS for their talent base as well.

Remember, this isn't college throwball. 95% of a USL PDL team's roster will never get paid a thin dime to play professional soccer. They're going to school to earn an education while soccer is an entertaining and, if they're very good indeed, potentially lucrative diversion. The CONCACAF Champions League group stages begin in August and end in October, flying its participants across Central America and the Caribbean. Even for professional teams, the schedule can be difficult. Those playing semi-professionally and with full-time jobs can probably get time off from understanding employers - the employers must be understanding for them to get semi-professional rides to begin with! But even if the Canadian Soccer Association stepped in and found a way to finance these expensive trips, what chance would full-time students have? Missing classes, trying to practice and stay in game shape with only friendlies (for their PDL seasons are long over), skipping NCAA and CIS practices or games, the real stars holding off on potential professional commitments that would ruin their eligibility for an amateur side, all so they can get waxed in Trinidad and Tobago?

Is it unlikely that a USL PDL team would qualify for the group stage of the CONCACAF Champions League? Of course, but stranger things have happened. Besides, the same problem applies to a lesser extent in the Voyageurs Cup itself. A tournament long enough to include amateur clubs would have to begin earlier, and even the current incarnation gets started in late April, weeks before the PDL season. A full tournament risks obliging PDL teams to finalize their rosters and begin play during the school year, which would be difficult at best and put the amateurs at a heavy competitive disadvantage.

Hi, Vancouver Whitecaps of Major League Soccer! This Voyageurs Cup thing is going pretty well, isn't it? You're taking on rivals in Toronto and Montreal, and a bunch of leatherlunged prairie boys from Edmonton are pissing your fans off by talking about bringing down the big MLS team. Attendance is pretty good for weekday games, it doesn't take up too much of the schedule, and maybe you get to win and go thump some Mexicans.

Well, we're going to change things up a bit. Instead of playing Toronto and Montreal, you're taking on Gorge FC and the Fraser Valley Action. They're really excited about maybe bringing down the MLS stars - I'd expect to see a couple away fans at BC Place for that one! And if you beat them, then you get that exciting home date with the hated Toronto and Montreal teams. Well, one of them, anyway. Also, the tournament's a month longer now.

So, what do you think?

This is much more of a problem out west than it would be in the east. In the east, the travel would just mean that Atlantic Canadian and rural clubs could never participate and I doubt that's going to break your heart. But out west, there are a few blocks of clubs spaced apart by gigantic wildernesses full of nothing.

A PCSL or VMSL team would never have a problem heading to play the Whitecaps, but flying to Edmonton might cost more than their travel budget for the rest of the season. Similarly, that amateur team in Calgary would probably be able to take a bus ride to Edmonton easily enough, but when a time comes to travel to the Kamloops Excel... well, you have to do that twice in a round robin and the cost might add up awful quick. And if one of them somehow won that pool and had to fly to Stade Saputo, well, hell.

So, you smartass, what would you do?

First off, I'd give up on amateur USL PDL teams. A few non-affiliated USL PDL teams in the United States are starting to go semi-professional, and if any of our guys ever go that route they'd be welcome. I'd also let in the Whitecaps Residency and Prospects, the prospective Edmonton academy team, TFC Academy, and the Impact reserves with fairly strict cap-tying rules to prevent clubs from fielding overly strong secondary clubs or even weakening the little club too much mid-Cup.

Realistically, the qualification process for 2012 might have to begin in 2011, letting the amateurs and the semi-professionals duke it out amongst themselves. That would give them plenty of time to have a fair competition arranged on a regional basis so it wouldn't be a financial hardship. It'll also give a team plenty of notice that they'll be required to travel and even where they'll have to travel to: Milltown FC will know well in advance who also qualified and the funds they'll have to raise, and if they can't do it they'll be able to gracefully bow out in favour of the next-placed team. There'll be roster turnover between the team that qualifies and the team that plays, but that's life.

The amateur and semi-professional teams could even have a little cup amongst themselves to serve as the qualifier, to lend a little prestige. Why not? What's a nice trophy cost, $200? The CSA can make that happen.

Then your 2012 teams duke it out. The fully professional teams in MLS and the NASL get an automatic entry, of course. The minnows have known what they're up against for some time and will play all their games for the Voyageurs Cup in-season, giving them the best realistic competitive chance. They'll probably lose, of course. The gulf between division two and division three in Canada is awfully large, but upsets have been made over larger. And if they achieve it, the Voyageurs Cup neutral site final would come just in time to be a perfect crown to their season.

If the minnow gets really lucky and wins the whole show, well, fantastic. These guys can hopefully book more time off work for the Champions League matches. There are mid-sized stadia that would probably meet CONCACAF standards - Lamport in Toronto, Swangard in Vancouver, City Centre in Victoria. At that once-in-a-lifetime stage, the Canadian Soccer Association could probably use some Aeroplan miles to get these guys to and from the games. CSL (well, CPSL) teams have played in CONCACAF before, after all, although the championship was less serious in those days.

For those who are a little too curious about how this would work, I rigged up a hypothetical schedule for qualification in 2011 and a Cup in 2012 (also showing qualification for the 2013 Cup - it gets a little weird). Work was boring and I make no apologies for it, but I think that schedule-wise my proposal is workable: we can have a fair schedule without playing through the snow in most of the country and still finishing up in time for Jack Warner and his pals.

A tournament where every game is worth watching, where every fan has a vested interest, and every team will be able to play without panicking about what to do if they win. That's the best we can hope for.