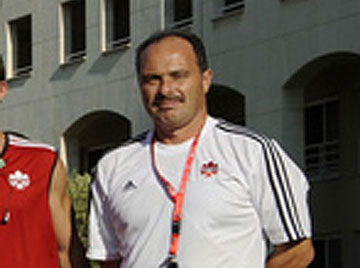 This is (probably) Valerio Gazzola, the new head coach of our men's U-20 national soccer team, replacing the promoted Tony Fonseca.

I can hear you protesting. "Hey, Lord Bob! You may not like the guy, but that's no reason to pick such an unflattering picture scanned off the side of a milk carton. Show some journalistic integrity for once, you hack."

Naah, I grabbed this picture straight off of the Canadian Soccer Association's website, in the actual press release they used to announce this hire. I can't blame them for having such a lousy picture, really. After all, where's Valerio Gazzola been for the past, oh, thirteen years or so? The CSA tells us he was "technical director" at something called "ARS Laval" and that in the last decade he's coached at "Dollard", "Monteuil", and "Lac St-Louis". I have never heard of any of those organizations. I do know that they are all comprehensive Quebec youth setups with really ugly websites (although ARS Laval at least has a generic WordPress template rather than trying to get creative). Some of them advertise "high-level" intercity competition, which is nice, I guess?

I'm not saying these are awful youth setups. Remember, I've never heard of any of them. I'm just saying, uh, we're hiring our U-20 head coaches from the ranks of mediocre metro Montreal academies now?

Ah, but I forget myself. Gazzola is also two-time head coach of the Montreal Impact, from 1994 to 1997 and from 2000 to 2001. But those were very different days: when Gazzola started with the Impact the league was still called the American Professional Soccer League and was a far less professional outfit than the USL Division One and North American Soccer Leagues we've grown to know and tolerate. To give you an idea how long ago Gazzola's glory days were, the 1997 USISL A-League featured only three organizations still active in the second division (Montreal, the Rochester Raging Rhinos, and the Vancouver 86ers), one that's moved up (the Seattle Sounders), and a few others still going in lower divisions, mostly the USL PDL but occasionally USL Division Two. Expectations were far lower, teams were generally worse, and attendance was even more erratic.

Gazzola won the last ever APSL championship and three A-League regular season titles, but playoff success in the A-League eluded him. Gazzola's return to the slowly improving A-League in 2000 was calamitous as the Impact had the two of the three worst seasons in their history: in 2000 they missed the playoffs for the first time since 1993 and finished behind the Toronto Lynx for the first time in their history coming in fourth in the seven-team Northeast Division. The Impact were once again fourth in the division and out of the playoffs in 2001 and Gazzola got his marching orders mid-way through the season, replaced by Nick De Santis who began the modern era for the Impact and the A-League.

This is not Gazzola's first spin with the national youth teams; he's been in on the U-17 team and was the assistant coach for Canada U-20 for a disappointing fourth-place finish at the 2009 Jeux de la Francophonie. That's probably exactly why somebody with no relevant coaching experience since Ali Ngon was a promising rookie is in charge of the future of our national setup.

The more things change, the more they stay the same.