A Brief Essay on Time-Wasting

Share All sharing options for: A Brief Essay on Time-Wasting 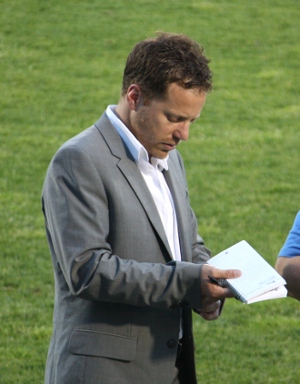 Somewhat to my surprise, upon getting up this morning I discovered that a minor imbroglio has broken out over Marc Dos Santos and the Montreal Impact's flagrant time-wasting last night at Stade Saputo. Not merely "oh, that's annoying" like you hear every time a Jose Mourinho team gets a 1-0 lead, but actual debate. Controversy, even. Nothing on the order of Trois-Rivieres Attak 1, Toronto FC 6, but all the same.

I'm not just referring to my esteemed Copper & Blue colleague Bruce's comments in my tipsily-written recap from last night. At Bar 99 with a few of the Montreal Ultras last night, I heard a draw called "the worst possible result" since the Impact fans didn't get the delight of a victory and the Whitecaps fans were knocked out of the tournament, but I really didn't think any more of it. Yet this morning, the Voyageurs board and to a lesser extent the Southsiders forum are alive decrying, or at least considering, Montreal's decision to waste time and go for a 1-1 draw. Even occasional Maple Leaf Forever contributor pRoke chimed in on my Facebook wall, saying "if I were the referee I would have given Djekanovic a 2nd yellow for time wasting".

I haven't really changed my position from last night. I think dos Santos was entitled to sit on a draw if he wanted to. There was no danger of his delegitimizing the championship as he did last year with the reserve fiasco. Montreal is a fiendishly talented team but Vancouver showed the better offense last night, even after the Impact parked the bus: perhaps dos Santos simply made a tactical assessment that if he opened up, his chances of getting burned for a Vancouver goal were too great. That is a coach's job, after all, and had he gambled and lost the excoriation in the Montreal and Toronto soccer presses would have been considerable.

What's most important is the dignity of our championship and the worthiness of its winner. The best contribution Montreal could make, once eliminated, would be to play their last match like it meant something. If it had been a league game, would dos Santos have bunkered like that in such a context? Maybe, but he certainly wouldn't have blown open the barn doors looking for a goal.

Oh, how I wish dos Santos had thrown caution to the wind, said "dammit, my fans paid to see us win," and sent Byers, Sebrango, and Placentino thundering down the pitch like their hair was on fire. Because the Whitecaps might have snatched one on the break and we'd be talking about the game next Wednesday in terms other than "how many Academy players should Toronto start?" At the very least Montreal might have scored and the Ultras would have been charmingly insufferable instead of vaguely depressed. But as a manager, Marc dos Santos did his job, and as a Canadian he did right by his national tournament. The prick.