I'm Sorry, Did You Think We Were Good?

Share All sharing options for: I'm Sorry, Did You Think We Were Good? 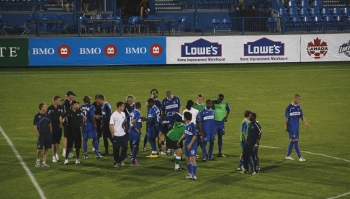 Gutted. Horrified. Infuriated. A whole bevy of emotions, each of them negative.

Should I be pleased that we deserved the result we got, that there's no "you lucky skunks" 6-1 victory hanging over our head like the Sword of Damocles, that Toronto FC has won our national championship in unimpeachably, impeccably pure and correct fashion? Probably, from an intellectual perspective, but I genuinely don't care right now. We came all this way just to draw. Just to draw.

Where was the urgency, the desperation, the drive? It showed up in spots, once in a while. Martin Nash had a chip on his shoulder. In spite of his lack of pace he can be omnipresent in midfield when he has a mind and he nearly achieved those rarified heights tonight, with the Impact having no answer to his effective distribution and his surprisingly strong positioning. There was a man who wanted to win. So, too, did Wes Knight, who flew up and down the right-hand channel and whose clean tackles saved the Whitecaps at least one goal against. Nowhere else, from the bench to the starting eleven, was there a player who left me consistently pleased with his effort. The headlines said that the Whitecaps would hold nothing back, but their effort showed a team that thought there were games yet to play. 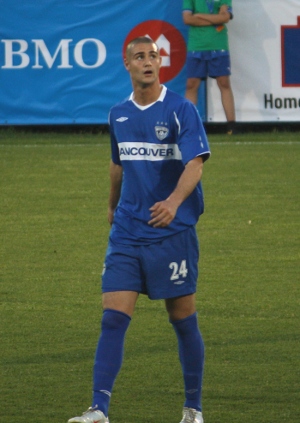 I am so flabbergasted that I am beyond speech. The questions are bubbling in my head, overriding any effort at analysis. Why was Marcus Haber so utterly decrepit? Perhaps his transfer to West Brom convinced him he is better than he actually is, for Haber was full of athleticism. He thundered with that ball down the wings and no Impact defender could get that thing off of him for love of money, yet what on earth did he achieve with it? What did he even come close to accomplishing?

It has been one long season of struggle for Haber, once the USL-1 golden boy, whose only moment of glory this season has come courtesy a Voyageurs Cup penalty. But Teitur Thordarson's faith in young Haber is unshakable. Teitur cannot be building for the future, as of course Haber's loan spell ends soon and he will be returning to West Bromwich Albion. So why the continued selection? Cornelius Stewart, once again, left the older and larger Haber in his dust. Even debutant Doudou Toure was far Haber's superior, and I'd have rather had Marlon James than Haber ten times out of ten.

Yet James, though healthy for once, sat on the bench for the duration. Why, Teitur? Why? Perplexing decisions were not limited to the players, after all.

One decision that did not perplex me was Montreal's; to waste time and go for the draw. Last year, we criticized them for not caring enough about the Voyageurs Cup and not giving Vancouver a fair chance. Now, we criticize them for caring about Toronto's rights too much and not opening themselves up to go for a victory they didn't need. Time-wasting is despicable anti-football and Montreal was right to employ it.

The problem was that we made it so easy for them. Credit to Ansu Toure, whose goal was a lovely thing, the sort of scrappy blue-collar effort the Whitecaps have had the devil's own time getting this season. His celebration was worth the price of admission on its own. But when Toure scored the Whitecaps grew complacent - in the stands, even I said to myself "here is what we're good at, defending the lead". Marc dos Santos was having none of it, bringing in his best striker Peter Byers for his worst midfielder Tyler Hemming and going with a 4-3-3. The Impact promptly proceeded to shove it down Vancouver's throat. 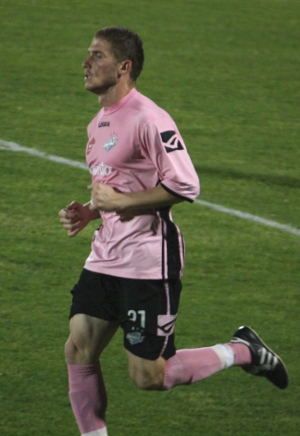 Everything went wrong. Greg Janicki, who until that moment I was convinced had super powers from his omnipresent cranial bandage, was beaten cleanly; torn between dropping back and challenging the ball he did neither and was shredded for his trouble. The ball instead found its way at the top of the box to defender Philippe Billy. I don't really know much about Philippe Billy beyond what I hear from the Montreal Ultras, and what I hear is that he's a fat tub of lard not worth the all-too-considerable salary the Impact are paying him. So imagine my horror when that round mound made a nifty side-step and pounded the ball past a helpless Jay Nolly to level affairs.

Such a lovely goal from such a fat man. And the astonishing thing was that as the game wore on and Billy went to the sidelines for water during stoppages and was so drenched in sweat it looked like he had come out of a wet t-shirt contest he just kept going, virtually toying with the Whitecaps, and only Zourab Tsiskaridze came anywhere near being able to cope with Billy.

As the game wore on, the Whitecaps started to realize their dire straits, but they reacted in entirely the wrong fashion. Rather than build up and generate attack they sprayed the ball wildly, wasted corners and free kick opportunities, and generally acted like they had ten seconds left rather than twenty minutes. Doudou Toure made his first appearance as a Whitecap, was fast as hell, and in my opinion drew a foul in the area during stoppage time, but lacked the skill to put the Whitecaps over the top. Marcus Haber was terrible. Cornelius Stewart, bless him, was too exhausted to make a difference. The midfield and the defense hoofed the ball up, and as the game wore on only Takashi Hirano (of all people, he of the utter awfulness against Toronto last week) showed any touch or patience whatsoever.

There was nothing. None of the competence or confidence we saw as recently as Saturday. There was merely offensive impotence, midfield idiocy, and defensive ineptitude. There was nothing we could hang our hat on. Even Doudou Toure's missed would-be penalty felt like a cheat - we didn't deserve to win on a ninetieth-minute penalty anyway.

There was no question about who deserved the Voyageurs Cup this year, and when I gird myself to cheer for Toronto FC in the CONCACAF Champions League I will at least have the comfort of knowing that our best representative is taking part. Their supporters must be thrilled. But I hope you'll excuse me if I take some more time to wallow in misery and the humiliating defeat of a team that is, technically, undefeated in the tournament.