Pride (In the Name of Footie)

Share All sharing options for: Pride (In the Name of Footie) 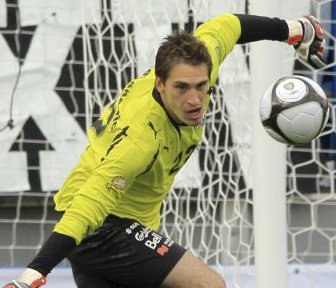 What more revolting phrase is there than "playing for pride"? The mere use of it carries a host of implications more fit for the nineteenth century. "Oh, there's nothing on the line in this game, really, except pride! Bragging rights! That ephemeral athletic chivalry which compels a sportsman to play his blood out for any stakes!" Yet ultimately every match, from a Sunday afternoon for your rec team to the Champions League final, is for pride. Those titles and trophies only hold meaning insofar as players take pride in the achievement and fans take pride in their champions. If a team will not take pride in a game against a professional opponent just because there's no shiny trophy at the end, they have far greater problems than merely one game.

So yeah, the Montreal Impact have nothing but pride to play for tomorrow, but that should be enough. The Impact have been precious short on pride the last couple of years, what with 6-1 and Roberto "Duran" Brown and actually giving ruffian Adam Braz a professional paycheque. Impact supporters can point with some justification to their USL Division One title in 2009 and their ownership of the Whitecaps in USSF D2 league play. But none of that was on national television against (it galls me to say) the largest, best-supported club in the country. It is a hard truth that pride in obscurity cannot scrub the stain of humiliation before millions.

For the sake of all Canadian soccer fans, the Impact had better play as close to their first team Wednesday as they can get. For their own fans, for the neutrals watching across the country, and even for the innocent Vancouver supporters who already hear the bleating of the more deranged TFC types before the game has even begun (I will not dignify such filth with a link), whinging about a capitulation they view as inevitable.

I'm quite serious. As a Southsider who'll be at Stade Saputo tomorrow, I want to see Montreal's best. The Whitecaps winning the Voyageurs Cup right now would take an upset that would make 6-1 look like a game of Parcheesi and I wouldn't want a Toronto-sized asterisk if by some miracle we did pull off those two wins in two games. Yes, it would balance accounts for last year's debacle, but some accounts are better not balanced. The last thing our national championship needs is another credibility-sapping capitulation.

Would Marc dos Santos dare to run out the scrubs anyway? Remember, the Impact boss took a bath in the press for his tactics last time out and Joey Saputo actually apologized to the Whitecaps on his team's behalf. Not even the Ultras, who could be expected to best understand the strategic logic, forgave too easily. Would he really imperil his reputation with a repeat performance? I doubt it. He may dress like a model but Marc's no Derek Zoolander. We probably won't see his best eleven but the lineup could be comparable to what Toronto ran out last week at Swangard Stadium, at least.

If he does that, the Impact should be able to do what is required of them. Vancouver's strung together a couple inspirational performances in a row but even with the goalless drought over Vancouver's offensive offense is a 72-point question mark. Montreal's looked the better side so far in the league and has a defense more than equal to Vancouver's anemic attack. A draw decides the Cup, and in their own building the Impact should get at least one point.

That would, of course, leave next week's Toronto - Vancouver game as just two teams playing for pride. But I don't see that being a problem.