Who the Hell is Pedro Pacheco?

Share All sharing options for: Who the Hell is Pedro Pacheco? 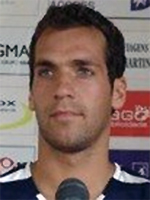 This space has a proud history of bringing you the latest in obscure Canadian footballers. Whether it was the latest and greatest intelligence on the infamous Dominic Imhof or... actually, it was pretty much just Dominic Imhof. However, today the series continues with the latest mystery man called to the Canadian men's national team, future Argentina/Venezuela debutant Pedro Pacheco.

Pacheco is as obscure as obscure can be. The Canadian Soccer Association didn't respond to my request for information by press time, but we know that he's a midfielder from the Azores, born on June 27, 1984. He's 5'10" and 172 pounds and currently plies his trade for C.D. Nacional in the Portuguese Liga, the first division in Portugal. Nacional is a mid-table size and Pacheco just completed his first season there, having come over from first division rival C.D. Santa Clara on a free transfer last summer. He's a dual citizen of Canada and Portugal, rendering him (presumably) eligible for the Canadian national team assuming this isn't another Ugo Ihemelu situation. How he qualifies for that citizenship is a very good question.

Although playing in quite a good league, Pacheco doesn't get a regular shift: he made five league appearances last season, four as a substitute, usually coming in late in the game. He also turned out in a couple cup games and once in the Europa League against FK Austria Wien. From what information is available on his substitutions he seems to have been mostly used in an attacking role.

No complaints about calling the kid up. The Portuguese league is a good one, ranked ninth in UEFA. Our midfield against Argentina will be strong enough that he might not see action in that game but I wouldn't be surprised to see him start in Venezuela. But the remarkable thing is that we called him up at all. Whatever Pacheco's connection to Canada is, it looks pretty slim: he's never played in this country as far as the Internet can tell us and certainly wasn't part of anybody's youth setup growing up. He is, basically, Marc Bircham, except that we know Marc Bircham spoke English.

It's a remarkable step for the Canadian Soccer Association, who not-so-long ago were unable to scout their own asses with both hands. Heck, for the longest time one of the greatest joys of the Voyageurs was trying to tell the CSA about seemingly-overlooked Canadian diamonds in the rough like the legendary Joey Torchia. And yet Stephen Hart and company seem to have pulled the wool over the eyes of the entire Canadian soccer universe: none of us, however well informed, even had an inkling that this kid existed and was eligible for us. Whether somebody in Pacheco's camp alerted Canada about his eligibility or it we had a man in Portugal who seriously earned his paycheque with some grade 'A' sleuthing, it's something to celebrate.

Be excited about the trend; that the Canadian Soccer Association may be showing the same ruthlessness with uncapped foreign nationals that other countries have traditionally shown to poach ours. Be excited that we're not being dirtbags about it, as Pacheco was never in the Portuguese plans. Be excited about the player, who is getting a paycheque to play first team minutes on a pretty good team in a pretty good league and is only twenty-five years old.