Share All sharing options for: The Whitecaps: Disappointing Dominance 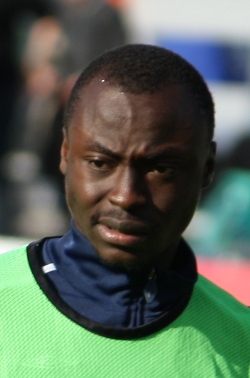 Even when the Whitecaps win, they lose.

Through good fortune, I found myself catching the second Vancouver home match of the season just as I caught the first a couple weeks ago. In contrast to the season opener, Saturday was a lousy cloudy day. Rain spit on us at intervals throughout the match and opened up for good about sixty minutes in. The crowd, as is predictable for a Saturday afternoon game in lousy weather against an unremarkable expansion team, was underwhelming.

Appropriately, so were the Whitecaps.

AC St. Louis (or, as we called them based on their uniforms, "Australia") is actually an example on how to do an expansion team right. Their logo is lovely. They play in a nice little natural grass soccer-specific stadium in the St. Louis suburb of Fenton, and they draw well so far. Their on-pitch performance has not matched their off-pitch elegance, as manager Claude Anelka opened the season with an embarrassing gaffe that cost his team the game and they have since gone down without credit to Austin, Portland, and now the Whitecaps, scoring only a single goal against the mid-table Aztex in four games.

Vancouver owned St. Louis. The possession was stupefyingly lopsided. Shots were 11-1 Whitecaps, and St. Louis's single shot was no real chance. Claude Anelka would be better advised to play than manage, as his team could use the offensive spark. St. Louis never looked like they had a real chance of snatching a point, and sure enough, they didn't.

That old nemesis of the Whitecaps: injury. Marlon James was the first. To the surprise of nobody, James pulled up in training with a hamstring injury, and although it wasn't serious Teitur Thordarson opted to play young speedster Randy Edwini-Bonsu alongside loanee Marcus Haber making his Vancouver home re-debut.

Long-awaited Mouloud Akloul was in the lineup for the first time, starting at centre back. Akloul came over from the United Arab Emirates for this season and was highly touted, but injury robbed him of an appearance until yesterday. He was magnificent. His poise on the ball was a remarkable sight on a Whitecaps back four that is skilled and athletic but have a weakness with ball control. In the nineteenth minute, Akloul introduced himself in style by slamming a five-alarm chance past New York Red Bulls alumnus Alec Dufty.

The Whitecaps celebrated. Except for Akloul, who went down in a heap by the baseline. He broke his ankle scoring a goal. Nineteen minutes into his NASL career. Figures. Great strike rate, though.

The next-most dangerous Whitecap was, surprisingly, Wes Knight. Knight is twenty-three and has spent his entire professional career in Vancouver, making thirty-two appearances but scoring zero goals. Nobody with any knowledge of the Whitecaps questions Knight's contribution: he's defensively sound, crosses well, and has the best throw on the team. The goose-egg has been the subject of talk in the media lately, and the right back showed up ready to get a monkey off his back. He had a couple good cracks and was almost alarmingly active up front. A goal seemed to be only a matter of time.

Then he left midway through the first half. Tweaked his knee. Nothing serious, but Teitur wasn't taking any chances. It was only AC St. Louis. One goal would be enough, surely.

(It was, and handily. That's not the point.)

The Whitecaps may have controlled the game but they didn't do enough to control the scoreline. I remembered why I'd always been put out by Marcus Haber. When he was bought by West Brom, I thought "well, maybe I was wrong about the guy". He is big and pretty clever on the ball for a Canadian, perhaps there's something there. He can certainly score at this level, there's no doubt about it.

His moves put the St. Louis defense to shame. But nothing came of them. He was bigger than the men trying to mark him, but he couldn't exploit it. In the first half when the Whitecaps attacked towards us, Haber was being pushed around and man-handled in the area, but he couldn't rise to the occasion and establish himself against superior opposition. Without Charles Gbeke as his foil he seemed lost; he was always at his best when the opponent had to respect the big, thundering pure finisher and give Haber some room to maneuver. Randy Edwini-Bonsu is not that sort of player, and anyway he had a pretty quiet game, so the attention was on Haber and he did not deliver.

A healthy Marlon James will hopefully play the Gbeke role and open the pitch up for Haber, but a healthy Marlon James is a rare thing. Somebody with Marcus Haber's combination of physical and technical superiority, a bloody rare thing for a striker in the North American second division, ought to be able to make his own space. Haber isn't there. It's infuriating. And he's a very young man yet, and hopefully some quality European coaching will open up that part of his game, but in the short term he seems set to be as frustrating a player as ever.

Randy Edwini-Bonsu cannot be absolved of fault. He has one more senior international cap than Haber at a younger age, but he isn't Haber's equal. The speed is delicious, tantalizing, constantly promising a glorious strike. The finishing is there; he can already shoot from distance and in close he isn't an assassin but with the ball at his feet he won't miss. It's just a matter of experience for Edwini-Bonsu, who lest we forget came to the game late in life. Right now, smart defenses can largely neutralize Edwini-Bonsu by playing off of him and standing back so they can't be scorched by his speed. He hasn't got the moves to beat them off the dribble and doesn't usually find the right pass, so his opportunities go for naught. When he does play the ball by a guy and turn on the jets, he will beat anybody to that ball but he'll also put himself in a position deep in the attacking end which he can't play himself out of.

I'm more confident in Edwini-Bonsu's future than I am in Haber's. Edwini-Bonsu is nobody's fool. He'll figure this out as he plays against professional players more and more often. He only turned twenty last week and has played seventeen professional games in his life. He's also in the perfect spot for a man of his abilities, and if he falters or struggles for confidence there are other young strikers who can ease the pressure. He'll get there.