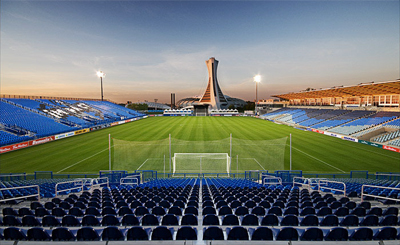 To a sufficiently well-informed Canadian soccer supporter, those words will suffice.

Let me explain them to the rest of you. There was a rare sense of palpable optimism in the Canadian camp leading up to 2010 World Cup qualifying. It's easy to forget how excited we were, how our midfield was the best in CONCACAF, how our team was entering its prime, how Rob Friend was a sleeping giant on the verge of awakening. Frank Yallop had finally, finally been done in after his destructive tenure as Canadian manager, and Kevan Pipe would soon follow. There was the usual CSA shambles around the hiring-then-not-hiring of René Simoes and the ensuing fall of Colin Linford, but much was forgiven with the arrival of successful U-20 manager Dale Mitchell.

We had dispatched St. Vincent and the Grenadines with brutal efficiency uncommon to us. The real test began on August 20 at BMO Field against the Reggae Boyz of Jamaica, but in a very important sense the bar had been hurdled already. The sold-out crowd of 22,000 was raucously pro-Canada. To my foreign friends, it is impossible to describe what a surprise this was and how meaningful it had been. I, and others, had expected the Toronto FC supporters groups to be predominantly the club-before-country crowd that had disappointed us before; "Canada? Pfft, call me when I can cheer for Italy." But they had come through, even if the national team had not in a 1-1 draw.

Our next game, September 6, was in Montréal against Honduras. It was also, by coincidence, the first time I'd ever got out to a national team match with the Voyageurs. A part-time student at the time, it had been difficult for me to scrounge the cash to make the trip but after the excitement of Toronto I had been morally certain it would be worthwhile.

We met at the Peel Pub, a tasteful little joint downtown where the Voyageurs had the top floor all to themselves. I arrived a little early and was greeted by a vast array of empty chairs and about two guys who already knew each other. Being a shy and soft-spoken fellow by nature, this was an ill omen, and I pretty much sequestered myself in a corner for a bit while getting a start on my drinking.

I needn't have worried. That pub filled up in a hurry. On my right was a fellow from Halifax who had made the trip with his remarkably bored girlfriend to troupe the colours. On my left was a Red Patch Boy who watched the Toronto FC game the pub was showing with visible distress and angst: this was the famous game where the FC, decimated by World Cup callups, were dressing a scout, Rick Titus, and various other nomads who put in a surprisingly credible effort. I was surprised at times by how strong the Toronto support was: there were a few Ultras giving the Red Patch and the U-Sectorites a hard time over their semi-professional lineup but even the Montrealers were carried away in cheering on Toronto. It was my first experience of organized soccer supporter's culture, and even for a relative recluse like myself it was strong drink.

We marched on Stade Saputo seemingly fifty thousand strong, singing and chanting, marching through the Eaton's Centre. Around us, stunned on-lookers took pictures and whipped out cell phone cameras to capture, with distinct amusement, this most un-Canadian of spectacles. Mall security got in our faces about daring to use their escalators. Turnstiles at the Montreal Metro jammed, so we were obliged to hurdle them like proper football hooligans. When we were on the actual trains, our singing and cheering and jumping caused the cars to roll palpably on their rubber tires and those in the train for reasons other than the match to display a blend of amusement and terror.

I can pinpoint the precise moment it all went wrong. The moment we, the bold Voyageurs crowd, marched around the Olympic Stadium, through the gates of our own stadium, and into a concourse packed to the gills with blue and white. Surrounded on three sides like the Romans at Cannae. They shouted at us and we shouted at them as what security presence there was got between us, but my spirits sank: my god, this many? Maybe this is all of them. All here. In one place. Waiting for us.

Not by a long shot. The ticket arrangements had been slipshod; we had been promised a password-protected Voyageurs section, but what we had gotten was a wide-open area where tickets were cheaper in what an overenthusiastic translator had christened the "Travelers section". I doubt the scores of Hondurans in the alleged home section had genuinely meant to infiltrate the Canadian support. What was there to indicate it was the Canadian section at all? And the tickets were cheaper, so more money to spend on beer you could douse the Voyageurs in. The crowd was Honduran almost to the core. Even BMO was in on the act, offering all and sundry a set of noisemakers in those traditional BMO colours, blue and white. When a patch of Voyageurs were offered sets by a lovely young lady near the gate, we gazed at both concept and colours in horror. Are you absolutely serious? They were. We did not take any.

The game need hardly be described. We were beaten before kick-off. A 1-0 lead courtesy Adrian Serioux, but the most flagrant dive in a career full of them by Amado Guevara and Serioux was sent off. Canada controlled the play but Honduras controlled the result, 2-1. Eschewing any post-game gathering I instead stalked back to my hotel on foot, down Rue Ste-Catherine, for ninety of the longest minutes of my life. Each step dogged by honking horns and Hondurans, spotting my Canada shirt, leaning out to shout something incomprehensible before blowing past in a car almost invariably adorned with a Canadian license plate.

That was September 6, 2008. Two years and one day later, we will once again face Honduras at Stade Saputo. This time with nothing more than honour at stake, or what little is left of our honour after that disgraceful showing. That night turned so many supporters from ambivalence towards Honduras into sheer, white-hot hate: if every axon in every nerve in my brain were to have 'HATE' engraved on every available surface, it would not add up to one fraction of one iota of one fragment of the hatred I feel towards Honduras in a sporting context. That the Hondurans, for their part, seem entirely oblivious to this makes this supposed rivalry even more virulent, as we are so insignificant that even our blackest loathing can barely register on their radar.

I hope, like I have seldom hoped for anything soccer-related, that the CSA gets its act together, and Stade Saputo does its job, and Montréal comes out to support the home team, and the players realize the significance of that game. The phrase "meaningless friendly" is a shop-worn one, but it could not be less appropriate in this case.