Whitecaps Open Their Season in Style

Share All sharing options for: Whitecaps Open Their Season in Style 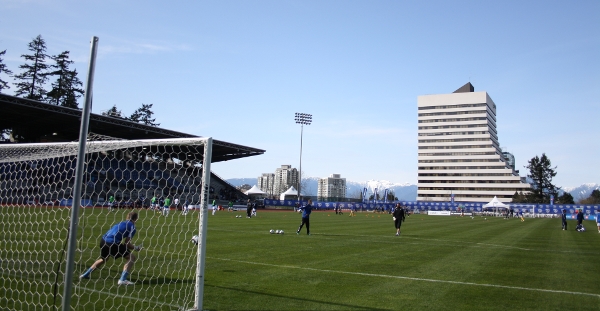 We really are going to miss Swangard Stadium when it's gone.

I've been to my share of football stadia in my years. I watched the Edmonton Aviators and so many incarnations of the Canadian national teams at Commonwealth Stadium, the biggest, baddest building this side of the 49th parallel. It seats one googol, was until recently natural grass, and had every amenity known to man. It is easy to get to and easy to leave. The sight lines, from everywhere, are terrific.

God, I hated every second in that pit. It was one huge, characterless, concrete chasm. Swangard Stadium is something else. It's nestled into a corner of a park, trees hanging placidly and even happily overhead, the mountains of North Vancouver lending a splendid backdrop from the south stands. Yet it is small, and out-of-the-way, and this season marks the Whitecaps' last at that humble, glorious venue, the best soccer stadium I have ever had the privilege of gracing. Next year we set up shop at a set of steel bleachers that will be nicknamed "Empire Stadium" as if in mockery of what once was, and the year after it's fake grass in a fake concrete bunker of a building probably filled with fake fans. Yet another government-owned multiplex to suck away our souls.

Luckily, the Whitecaps seem determined to send the old home off in style. Teitur Thordarson, Colin Miller, and a few other Whitecaps staffers visited us Southsiders as we enjoyed some pulled pork sandwiches and shot the breeze; the normally taciturn Thordarson seemed in good spirits, making a little speech, thanking us for our support, giving us the (correct!) Whitecaps starting lineup, and mentioning potentially trialling an experienced MLS-capable striker for the next transfer window which immediately had me leaping back on the Ali Gerba bandwagon. But, perhaps more tellingly, he and his staff declined a pulled pork sandwich.

What an infantile thing for me to make a point of, but bear with me. You see, Thordarson explained, they were minding their diet. Since a five-week Christmas break, the Whitecaps had been training constantly, seven days a week. He didn't come right out and say that he was exasperated with the team's conditioning last season, but it was certainly implicit. What he did say was that he was much happier with affairs this year: maybe it wouldn't make a difference in the first game, the Icelandic skipper explained, but as the season wore on we'd see the advantage it gave us.

Well, Teitur was wrong on one account and one account only. It made a hell of a difference in the first game.

The Whitecaps started slow, even timidly. The opponent was the NSC Minnesota Stars, playing their first game in franchise history (our newest song is older than you!, sang the Southside) and expected to go down in a ruinous wreck. Certainly, Vancouver's skill told on balance, but the game got off on the wrong foot. There were sloppy plays here, excessive conservatism there, and too much aggression in other spots. We soaked up yellow cards like water. The first half dragged. The Whitecaps had a golden chance off the head of central defender Greg Janicki but it was at our own expense: Janicki kissed a particularly ill-advised clearing header off our own goalpost and the ball was only cleared after a proper Chinese fire drill.

It would be uncouth and against all footballing protocol to say this, but the one highlight came at the expense of Stars goalkeeper Louis Crayton - a seemingly nothing collision with Dever Orgill in stoppage time sent him down in a heap. I thought it was a dive or some time-wasting, and certainly Crayton rolled around like hell on the pitch. They got the stretcher and everything, and lifted him to the sidelines, and holy shit is that Joe Warren?

It was! Joe Warren! You remember Joe Warren, the longest-serving member and oft-times starter of the late Minnesota Thunder, he who retired back in 2006? That Joe Warren! I saw Joe Warren back in the Aviators days! It was like having an old friend over! I could not have been more delighted to see him, not least because he retired back in 2006. If the Whitecaps could actually put a scoring chance together (for the only thing they ever sent hurdling at Crayton was Dever Orgill), we might just win this thing!

In truth, Warren wasn't bad. He handled the ball like a hand grenade, like you'd expect. But for a man his age the athleticism was still there; his reflexes were every bit as good as they'd been in his prime and he made a terrific save off of a Whitecaps striker (I believe Marlon James) that would rival anything on Jay Nolly's highlight reel. But the Whitecaps seemed as excited to see an old friend as I was, and from the second half kickoff onward it was one-way traffic.

This is what I mean by conditioning. It had been pretty warm in the sun most of the day, but now the sun was dropping behind the trees and conditions at Swangard were getting chilly in a hurry. The Whitecaps, even when off their game, played a high-tempo style that could leave a few USSF-2 teams gasping for air. Slowly, the Whitecaps ground the Stars into the grass. It was gradual, but we started winning more and more of the ball battles. Even the fantastically sloth-like pace of Marlon James was giving the Stars fits. They resorted to the mistakes the Whitecaps made in the first half, fouling and giving too much up. It was only a matter of time, and an ugly foul on Anzu Toure at the edge of the box gave us our chance.

Martin Nash struck the ball perfectly. Luca Bellisomo (career Whitecaps goals to this point: one) was on the end of it. Luca Bellisomo is 6'2" but stick thin; nobody's idea of an aerial man. But he was uncontested on this one, getting his head to the ball with ease. Joe Warren couldn't leap that far. 1-0 Whitecaps and for all intents and purposes it was over. When Nizar Khalfan put the ball on Marlon James's foot fifteen minutes later, that was just salt in the wound. The Stars never really threatened once, aside from one random chance on the break that the exhausted Minnesota striker clipped wide.

And now, more of what I mean when I talk about conditioning. The game ended in triumph, of course, and we Southsiders cheered and sang our guts out before getting into our post-game routines. Some left, some helped tear things down. A few stuck around and called to the players, hoping for a handshake or a few quick words (I have never seen or heard of a professional organization more obliging with fan contact than the Vancouver Whitecaps). Normally, at least a cluster of Whitecaps would head to the south stands, give a few "hey thanks for the support"s, endure our congratulations and hopes for more playing time with good grace, and then go back to their own business.

Not today. Instead, the Vancouver Whitecaps, led by Thordarson and unfortified by pulled pork sandwiches, went for a jog. Cooling down, taking care of themselves. All business.