Share All sharing options for: Why Toronto Isn't the Voyageurs Cup Favourite 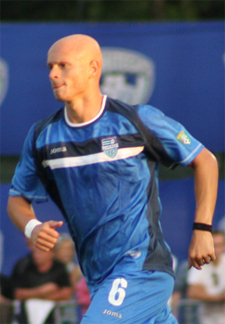 In case you haven't guessed, I don't much care for axioms.

Look at Toronto's roster. You thought the Nick Garcia Experience last year was bad then, boy, you ain't seen nothing yet. In direct defiance of one of my articles from last year, Julian De Guzman looks talented as hell but useless in the FC's setup and Toronto could not physically be missing Carl Robinson more than they are. The strike force is almost unbelievably bad. Both the midfield and defense have some talented individuals - Nana Attakora and Dwayne De Rosario are firmly in "call up to the national team until their legs fall off" territory and Sam Cronin is good enough that we need to invent a time machine just so we can give him a Canadian grandparent - but as units the defense is bad and the midfield isn't good enough to make up for it. Stefan Frei has all the brain cramps of Fabien Barthez without an iota of Barthez's talent. Depth is a problem. So is the coach, who has bluntly stated that he doesn't give a toss about our national championship compared to the league. Whether you think that's right or wrong is beside the point.

Let's compare that to the two defending USL-1 finalists the FC will be up against, Vancouver and Montreal. Vancouver is slightly weaker in some departments, with the departure of Charles Gbeke, Marcus Haber, and 2009 hero Ansu Touré among others. On the other hand, our old nemesis of defense had been addressed with the addition of MLS journeyman Greg Janicki, former Charleston Battery stalwarts Chris Williams and Nelson Akwari, and of course Zourab "Georgian Guy" Tsiskaridze, who wears #77 but don't hold that against him.

(Sidenote: apparently Georgian Guy played for Miami FC last year. I saw Miami FC in person twice last year and more often on webcasts. You think I'd have remembered a speedy 6'0" Georgian skinhead with "TSISKARIDZE" on his back.)

Unless the Residency kids come along or Marlon James stays healthy, the Whitecaps are going to have trouble scoring goals this year, but probably less trouble in their league than Toronto would have in theirs. Man for man, James, Edwini-Bonsu, Orgill and Semenets are awfully close to Barrett, White, and Ibrahim.

Montreal, meanwhile, can score with the best of them. Roberto Brown is arguably the best striker in Canada right now until the Ali Gerba situation resolves itself, and the depth is unremarkable but decent with Peter Byers, elder statesman Eduardo Sebrango, and a bevy of kids from Trois-Rivieres. Matt Jordan can steal games. Braz, Pizzolitto, Joqueviel, and Pesoli can help Jordan do that. While the defense has no stars with the loss of Joey Gjertsen, there are an awful lot of really good journeymen like Di Lorenzo, Hemming, Testo, and Placentino. Provided the Impact duck their crises from last season, they have to be a ranking contender for the Voyageurs Cup title.

Where does this leave Toronto? On the outside looking in, barring either a change of heart from Preki or a balls-to-the-wall performance from the FC's lesser lights. This isn't a "USSF Division Two is a better league than MLS!" argument. This is "if two good USSF-2 teams that care about the tournament go up against a bad MLS team that doesn't, the USSF-2 teams will probably win."

Which goes against every axiom in the book. But like I said, I don't much care for axioms.

(If you'd like to put somebody else's money where your mouth is, the esteemed Out of Touch Guy is running a Voyageurs Cup pool. You should enter. I will enjoy crushing you with my blatant Whitecaps homer predictions.)