A Beautiful Day to Be Alive

Share All sharing options for: A Beautiful Day to Be Alive 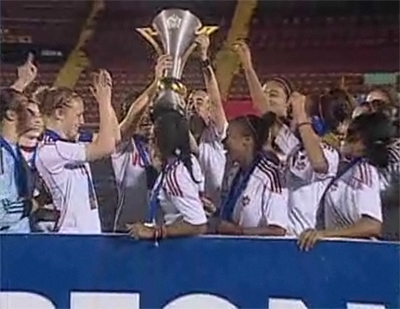 I said something stupid in my post yesterday. I said that Canada hadn't won any sort of CONCACAF tournament since 2000. Duane Rollins corrected me; our women's U-20s were confederational champions in 2006. A silly mistake and one I ought to have spotted. The Maple Leaf Forever regrets the error.

But somehow, it didn't make victory today any less meaningful.

First, of course, MLS labour peace. Those far more intelligent than I am are covering the new Collective Bargaining Agreement. I will leave them to it, save to note that it was a hell of a nice way to begin a weekend.

There was the Whitecaps friendly against the University of Victoria Vikes, of course. Normally that would have been worthy of a post in of itself. It was my first visit to the University in several years, and as an alumnus I was startled to see how much the place had been built up. Even Centennial Stadium, long one of the premier death traps of the Western world, had been build into a nearly-respectable soccer venue. The Vikes had always been a mediocre outfit and are of course out of season but played their best, limiting the Whitecaps to a 5-0 victory. As always in such mismatched victories it was the performances that mattered: Alex Semenets and Dever Orgill both potted a brace and look terrific even when the ball wasn't going in, somewhat relaxing my concerns over the Whitecaps attack this season. The few Southsiders to make the pilgrimage and I shivered in the bitter south wind, our few mediocre chants carried away on the breeze, but it had regardless been a terrific afternoon's entertainment.

The crowd, surely one of the best to grace UVic in many years, filed out after Justin Moose scored Vancouver's fifth goal (the thinking doubtless that if Justin Moose was going to start potting them, albeit on a wide-open look with nothing but net to shoot at from six feet, it was time to beat the traffic). But the Vancouver support remained long enough to salute the players who came over and thanked us for coming out. Our Georgian guy, whose name I can't possibly remember but may have to learn, was overshadowed by Semenets and Orgill but may have been a dark horse for man of the match. It wasn't just the pace or the intelligence. I had no idea he could cross like it turned out he could cross. There's a USSF-2-calibre defender hidden there in an austere shell which doesn't speak the English too well and looked vaguely frightened when he shook Southsider hands as if he thought one of us might try to strike up a conversation.

I hustled away from the University in time to get home for Canada's U-17 women's match against Mexico for all the marbles. We were, on paper, better than Mexico, which means that I of course didn't give them a hope in hell. In the eighth minute, though, Kinley McNicoll eased some of those doubts with a nearly-botched chip shot, catching the Mexican keeper off her line, beating her clean on the dribble, and then trying to coax a lame duck into the corner as the Mexican defense pressed. The ball kicked off the post and rolled along the goal line for a seeming eternity before turning into the goal just as the Mexican central defender got back to hack it off. 1-0 Canada early.

Throughout the first half, Canada was something I never expect from us: we were confident. Almost, but not quite, dominant. We controlled the ball with ease, we pushed down the pitch, we got some chances. Our back four stymied the Mexicans as surely as it had the Americans. It was all under control. I had no idea what to think. This doesn't happen for Canada, it happens to Canada, as a matter of cosmic history. Surely, surely, something would go amiss.

It did. Yazmin Ongtengco-Hintzen, who really has to pull an Ali Ngon and change her name to something that will give her super powers, was shown a red card for a seemingly legitimate tackle in the fifty-sixth minute. It wasn't so much the old canard/lie about having "got the ball" - Ongtengco did get the ball, of course, but more than that she only caught the man because by accident or on purpose the man slid on the turf, meaning that Ongtengco's leg grazed harmlessly against the Mexican's shin guard. It ought not to have even been a whistle, to say nothing of a red card. It was ludicrous. Obscene. It was, well, CONCACAF.

With the stalwart Ongtengco, one of Canada's best all-rounders for every moment of the tournament I've seen, out, the Mexicans went on the attack. Green waves poured down towards the Canadian goal like poorly-laid turf. Canada seemed suddenly tentative, learning about CONCACAF refereeing for the first time and fearful of a reprise. They slipped into the Phil Brown Memorial 9-0-0 Formation, booting the ball down the pitch at every opportunity. Two close Mexican chances sizzled just past the woodwork. It was all going wrong.

A favourite saying of mine is that booting the ball down the pitch is not a strategy, it is the absence of a strategy. Well, then, the Canadians had no strategy to speak of for fifteen solid minutes. Doom seemed certain, yet another heartbreaking loss to add to the long Canadian tradition of heartbreaking losses. Canada's skill was all over the place; stifled by fear and uncertainty of what to do, while the Mexicans attacked, attacked, always attacked, like wild dogs.

Then the sweetest sound in sports: three whistles. Canada had won something!

The sight of our young women celebrating at the centre of the pitch had to warm the most frozen of hearts. There was nothing there but joy: perhaps a bit of shock but mostly sudden elation, bottled up for so long and released in one glorious frenzy. They found the time to salute the Canadian support, about a dozen guys standing improbably far up the empty stands and providing the "Ca-na-da! Ca-na-da!" chant, showing gusto if not verisimilitude. I shouldn't complain. Anybody who flies the flag at a U-17 women's tourament in an empty Costa Rican stadium is all right by me.

Victory. I had almost forgotten what it felt like.