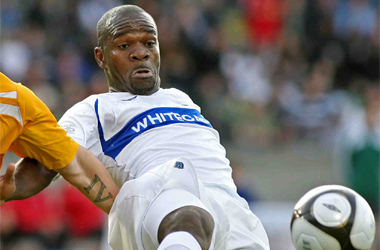 This is Charles Gbeke, filling out his jersey like usual. Charles was a big fellow in every sense of the word: 6'2" and built like an offensive tackle from the 1980s. Husky. Slow. Watching him jog (he never got above "jog") up the pitch, you got an idea about how tectonic plates worked. Seldom were he and Randy Edwini-Bonsu on the same pitch, but when they were, Edwini-Bonsu could outrun Gbeke going backwards. They were not an effective partnership just because they never really had the same game plan. So, naturally, the young, athletic Edwini-Bonsu has stayed, where the older, chunkier Gbeke is currently toiling with something called Guangzhou F.C. in the Chinese second division.

But here's the thing about Gbeke. He pipped fifteen goals in forty-two career appearances for the Whitecaps and led the USL Division One in scoring last season. The guy may have been essentially inert but he could strike with a vengeance and he always seemed to know exactly where he had to be. He was, essentially, a homeless man's Ali Gerba, but with the Whitecaps talented ball distributors and wing speed, he was deadly.

With Gbeke gone and Marcus Haber off to greener pastures in lovely, er, Exeter, the burden of scoring on Vancouver will fall to Edwini-Bonsu, 33-year-old oft-injured St. Vincent and the Grenadines-ian Marlon James, and a rogue's galary of decent-ish youngsters that include Dever Orgill, Canadian U-20 Alex Semenets, and a former Puerto Rico Islander benchwarmer with the tremendous footballing name of Jonny Steele. There's some potential there, but it's not exactly a murderer's row. When James is hurt (i.e. "all the fucking time"), there's not a classic goal poacher in the bunch.

Unfortunately, there aren't exactly a lot of talented poachers out there. Particularly not talented poachers in the primes of their career. Preferably ones familiar with the North American second division but who are still young enough to be key contributors to an MLS roster. It would be best if he were Canadian, to help us out with potentially problematic domestic player rules in the future. Besides, anybody available at this time of year would probably have missed professional training camps and be hopelessly out of shape. It's not like there's such a player who is actively trying to seek his release from one of our mortal rivals or anything, right? That would be impossible.

Oh, wait, what's that, John Molinaro? Preki has sent Canada's best goalscorer by strike rate home because of "performance" even though he's in the best shape of his career and that goalscorer, who could be fairly described as "Charles Gbeke if Gbeke suddenly got really good and could fire a shot from twenty feet hard enough to decapitate a USSF-2 goalkeeper someday", is trying to engineer his release from the club even though he's on a guaranteed contract that will pay him nearly $200,000 this season?

Now, maybe Gerba has really been that awful on a Toronto FC team that's looked uninspiring so far this preseason. Maybe his fat gave him super powers, like Samson's hair, and now that he's showed up lean and trim he makes Chad Barrett look like Wayne Rooney. Or maybe the notorious hard-ass coach is trying to light a fire under his team by sending home an expensive but expendable domestic player with a high profile just to show who's boss. Maybe Gerba is getting Jeff Cunningham'd. It's not like Toronto FC is blowing the barn doors off with or without Fat Fit Ali. Since a seemingly slightly panicked Mo Johnston was quick to emphasize that Gerba isn't being released, this reeks of a motivational stunt.

Let's suppose that Gbeke gets his release from Toronto FC. I doubt Toronto would be sad to get rid of Gerba's cap hit, and if they could pay him off for a portion of his remaining deal by mutual consent, one suspects everyone would be happy with that. Gerba would be in need of a team, obviously, and the European clubs with which he once plied his trade are mid-season. They probably wouldn't be looking to add an international who'd require a work permit. It would be North America or bust for him. MLS is probably going on strike, so there's a very good chance he'll be looking at USSF Division Two. And very few clubs have both the resources to pay Gerba and the roster spot where he could fit in.

The Whitecaps have both.

So make it happen, Mullet Bob. Sign him to a one-year deal and see what happens. It's not like you have a salary cap to worry about. If he performs, fantastic, you have a striker who'll be 28 at the beginning of your first MLS season and who we know can score goals. If he doesn't, no harm done, staple his ass to the bench in favour of Orgill or Semenets and let Gerba wander down the dusty trail in search of a club once again.

At the very least, Vancouver restaurants would appreciate the business.