Expensive Tickets: Will the Whitecaps Pay the Price?

Share All sharing options for: Expensive Tickets: Will the Whitecaps Pay the Price?

The Vancouver Whitecaps sure aren't kidding when they say "major league". $494 per supporter for regular season home games, plus two Voyageurs Cup home games. No friendlies, no playoffs. That's English Championship money, not Major League Soccer money. In exchange for that $494, you get to stand in the end zone at a Canadian Football League stadium to get a poor look at an expansion team from seats that, in the front rows, will be obstructed view thanks to electronic advertising stands.

Yes, the Whitecaps have come through on their promise to make seats available at $319. With four sections in the corners available to that price point, there's even a reasonable selection. The seats are bad but what would you expect for $319? You'd better hope you're one of the lucky few, though, because the next cheapest seats are a hundred dollars more expensive. By the time you're in the end zones, still a considerable distance from the play (remember, Canadian Football League stadium) and where the supporters traditionally stand, you're looking at $494 for your single seat. Plus 12% sales tax and service fees, of course. The BC Lions charged 40% less for the endzone than the corner in BC Place. The Whitecaps will charge their supporters 55% more.

It's true these are not the highest-priced end zone seats in Major League Soccer. The Los Angeles Galaxy charge $560 (currently $561.50 Canadian dollars - love that exchange rate) for an equivalent seat: end zone, assigned seat, non-supporters section. But you can knock $60 off that by taking the supporters' section instead. You can save even more by going general admission. The Galaxy are the only team that out-prices Vancouver: next is Seattle, who charge $436 for the end zone at Qwest Field. The American teams, of course, don't get Voyageurs Cup tickets in their season ticket packages but the per-game price in Seattle is still four bucks lower than Vancouver's. And Seattle has been experiencing a minor revolt for knocking up their season ticket prices to an unreasonable level! Even in Toronto, where Toronto FC fans practically shook BMO Field down with their rage over ticket prices, the current price for an end-zone supporter's seat is approximately $420.

Besides, the Los Angeles Galaxy are title favourites, the league's marquee team, and playing in a spectacular soccer-specific stadium. The Vancouver Whitecaps will be lucky to make the playoffs, are an expansion team, and are playing in a half-billion dollar concrete throwball stadium with a tent on the top.

Why yes I do think there's room for improvement here.

Am I saying I'll be abandoning my season ticket deposit and start watching the Whitecaps from home? No, but I'm insane. I flew to Montreal and Toronto to watch Voyageurs Cup matches that were meaningless before I got off the airplane and that cost a damned sight more than $500. But I was one of two Whitecaps fans to make that trip, and if you're relying on two Southsiders to pack your stadium then you are doing something seriously wrong. 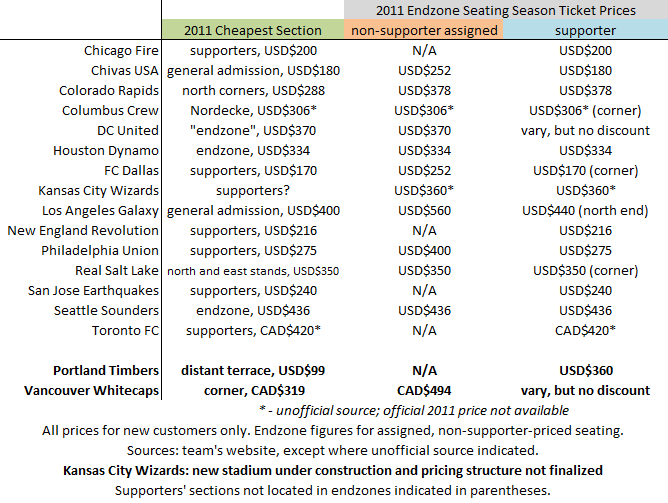 The Whitecaps' pricing structure is askew. The table to the right has some basic information (click the image for the full table); Vancouver's cheapest tickets are fairly reasonably priced and their most expensive are quite competitive. Supporters' tickets, on the other hand, are by far the most expensive in Major League Soccer. The reaction among the Vancouver Southsiders has been horror. What could motivate such specifically-targeted price gouging? Of course everybody expected a big increase from the 2010 USSF D2 season, but the expectation was generally that we'd take garbage seats, sing and chant and do our thing, and in exchange we'd pay something like the advertised $319 minimum for our tickets. Southsider season tickets at Swangard Stadium had been the cheapest available. This will be far from the case at Empire Field or BC Place. The location is every bit as bad as before, but the prices are even worse.

One can quickly see what the Whitecaps organization thinks of the Southsiders. The Southsiders have been allocated the first six rows of sections 250, 251, and 252: approximately 250 seats to be sold under the group's banner. The club has been gracious to the Southsiders, allowing them an exclusive pre-sale window in that section in addition to their history of supporting the Southsiders' tifo and promotion efforts. But graciousness does not equate to respect. When you allocate your supporters 250 seats, you're saying as clear as day that you either think they're lightweights whose culture will never catch on in Vancouver or are hoping to marginalize them in favour of a subdued, family atmosphere. I can't imagine a way in which either point speaks to the organization's credit.

This isn't an accident. The Vancouver Whitecaps are allocating a shockingly small number of seats to an established supporters' group: there have been already more than 250 people in the Southside for games last year against marquee opponents such as Toronto, Montreal, and Portland. They are then taking this small number of seats and selling them at an exorbitant price entirely out of line with the rest of Major League Soccer. If they wanted to squeeze the supporters out entirely, they could have not allowed a supporters' section at all and made it every man for themselves. The fact that they're allowing the Southsiders to set up shop in the south stands once again indicates that they're tolerant of supporters' culture: everything else says that they're nervous. That this isn't a club for die-hards, but one for the prawn sandwich brigade.

Would it be too far to call the 250-seat Southside a zoo? Drive the prices up high enough that a lot of working-class folk or families on single incomes won't be able to afford to get in, then put in a small section for the nuts who can afford those $500 tickets. Now the organization can grab a guy who wants to stand up in another area and tell him "we have a supporters' section, it's over there; in this stadium we sit down except when we're doing the wave." Rich guys going to the games get a non-threatening show from a small number of appropriately middle-class supporters while everyone else in the stands drinks wine and talks business. They can keep out the most noxious of the riff-raff: don't want the proletariat stinking up your lovely new stadium by spilling lager all over it. That way the Whitecaps get the best of both worlds: a pen of tame, appropriately well-off fans who they can point to like monkeys in a cage when they need to, yet no real risk they might pollute the 25,000 Gastown estate agents who fill the rest of the seats.

This is an organization that's never been afraid to use the Southsiders to sell tickets in the past. They've run photo shoots, shown real Southsiders heckling models dressed as the opposition, praised the stadium atmosphere in their marketing materials. Yet the handful of seats made available to the Southsiders are more expensive than the nearby seats in the corner which will have, by all accounts, a better view of action. What other explanation is there than the club using the Southsiders as a selling feature. "Come sit near the loudest-cheering fans in North America. Not enough of them to cause trouble, and certainly nobody who can't afford over $500 worth of soccer tickets every year. Enjoy the view of our carefully sanitized and controlled supporters' experience." If there's a better explanation beyond rank idiocy, I'm desperately waiting to hear it.

The Southsiders officials are saying that the whole south side will be marketed as a supporters section, but I doubt many new fans will be experimenting with supporters' culture at $500 a pop. Even many established Southsiders, who stood on the grass in driving rain to cheer on their team for years, are balking at the price. I fully expect the south stands to be filled with more professionals there to drink a $15 beer and not bother taking their suits off. I'm sure the Southsiders have been told the Whitecaps want a stand full of supporters, but do the Whitecaps plan on enforcing that? We'll see when the general sale starts, but right now if the Whitecaps are selling the south stands as a supporters' section they're sure not trying very hard; there's no label for a supporters' section and no change in prices between end zones on the current pricing map. On Twitter Dave Clark raised the spectre of where the away supporters are going to sit: there's no provision for them on the seating map. That means the Whitecaps haven't finished tinkering since the team is required by league rule to set aside 150 seats, but that's a pretty small shard of hope to hang my scarf on.

I don't know where the Whitecaps are getting their information saying that Vancouver can support this level of ticket pricing. On a per-game basis it's more than the B.C. Lions charge, as a well-entrenched team playing in a Canadian football-specific facility. The whole affair reeks of the Buffalo Bills in Toronto: the Bills assumed the city of Toronto would be falling down in joy to experience the beauty of the National Football League so they jacked the prices through the roof and as a result nine people showed up. Sports fans may be insane but they're not stupid. Offering unprecedentedly high prices to watch an expansion team is a strange idea, considering the predecessor of this team was playing in a 5,000-seat stadium with prices that were actually affordable to the casual family and not consistently selling it out. Is the "ooh, Major League Soccer" factor worth that much?

I realize that I sound cynical and pessimistic, but it's hard to help. It's not even the money that's causing it. Sure, I'd rather spend $319 than $500, but that extra two hundred bucks isn't going to make my rent cheque bounce. It's fear of what this team might become if it carries on this path.

My last favourite soccer team failed because of unrealistic expectations: the unfounded belief that because fans packed the stands for a U-19 girl's championship they'd do the same for the A-League. Now I'm seeing my new team say that, because 5,000 fans would pay a small amount of money to watch the Whitecaps in 2010, 20,000 fans will be willing to pay several times that amount to watch the Whitecaps in 2011. I sense history repeating itself, and seeing it the first time hurt badly enough. I see my team saying that the supporters' culture I embrace is superfluous to them, that if we want to pay they'll let us in but it's not our team anymore. The Whitecaps are aimed at the Whistler crowd, not mine.

I'm having a hard time looking on the bright side of that.