Better Know a Stadium: Where Should You Buy Your Season Tickets?

Share All sharing options for: Better Know a Stadium: Where Should You Buy Your Season Tickets?

Starting on Saturday, Vancouver Whitecaps season tickets went on sale at last. After taking deposits for much of 2010, and after the Portland Timbers have actually sold their season tickets, the Whitecaps have finally begun the process of filling their temporary home at Empire Fields and their new home at BC Place with loyal, die-hard fans willing to plunk down hundreds of dollars to watch Major League Soccer.

Of course, like everything else the Whitecaps have done with their ticketing, they haven't got it quite right. They've brought in nifty new online tools that allow you to preview and purchase your seats, but after months of harping on "the fan experience" they haven't actually posted much information on which sections provide which fan experiences. Loyal supporters are left to go off of Teitur Thordarson's informational advertisement, which while admittedly fantastic is short on specifics. Some fans have had trouble purchasing tickets off the website at all, being forced to call the Vancouver ticket office for assistance. Meanwhile, the Whitecaps website won't tell you where the supporters' sections are, or where the away supporters sections are. They're opening themselves up to a world of soccer moms finding themselves perched in the middle of screaming, hollering, leather-lunged fans, some of whom may even cheer for (shudder) the Seattle Sounders. And even the rest of the fans, the ones planning to pay $800 for a seat and not in danger of any supporters' interference, aren't getting the full story.

After the jump, Eighty Six Forever will take you through the sections to avoid and the sections to gravitate towards at Empire Fields and BC Place when you're purchasing your season tickets. The last thing you want is to spend that kind of money on a seat that you wind up hating, especially since one man's seat to avoid is another man's preferred seat. Let's spread the word about this and make sure everybody winds up exactly where they want to be from First Kick onward.

The main problem with picking your seats in a renovated stadium, of course, is figuring out what your view is going to look like. In general, the sight lines at BC Place are expected to be quite good. They may be even better, if anything, at Empire Fields. Discriminating consumers should avoid the first rows in the corner sections, as the unofficial word is that these views may be slightly obstructed due to electronic advertising boards. As well, anybody sitting in the first rows behind the goal will obviously have their view blocked by the goal, but to some of us that's a feature, not a bug.

The Whitecaps, enterprising high-tech fellows that they are, have released a 3D seat preview tool that shows you what you'll see from where you're sitting. It's a pretty neat trick, even if it can't be entirely accurate. The problem is that it only shows the field; it doesn't show the fans. And the fans can make all the difference in what sort of soccer experience you're going to get. 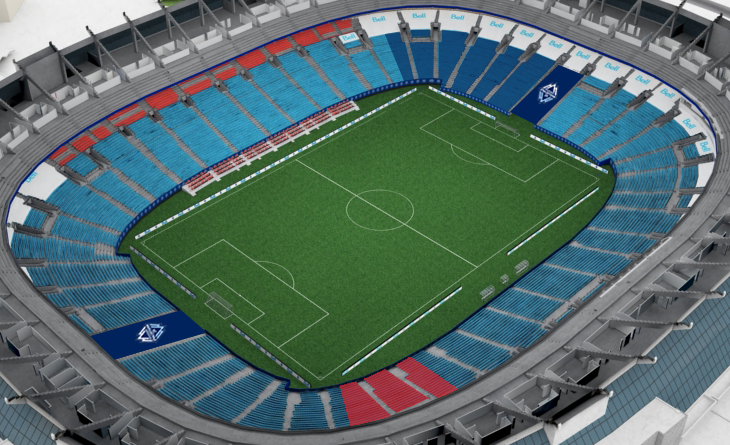 From that preview tool, you'd have no idea that sections 248, 249 (green), 251, 252 (teal), 253 and 254 (aqua) will be where the Vancouver supporters' groups will be congregating. These sections are marked on the map above in dark blue. Many of the established supporters in the Vancouver Southsiders and others in newly-established or private groups had access to a pre-sale and have already purchased tickets in these sections. The rest are, for obvious reasons, buying their tickets up early so they can be close to their friends and fellow supporters.

What this means for you casual fans is that these sections are going to be filled to the brim with singing, chanting, stamping, hard-core Whitecaps supporters. They will be standing for every second of the game, they will be singing or yelling something for most of it. There will be profanity, there will be accusations of paedophilia at the opposing goalkeeper, there will be all those words you hope your children don't know. These sections are attractive because of their low price point, but they're going to be unappealing to any fan who wants peace and quiet at a soccer game. On the other hand, if you love to stand up and hoot and holler, even if you're not a member of any supporters' group, those are the sections for you. Even if you don't mind standing and want to silently soak in the atmosphere, these aren't bad places to be.

For those who just want cheap seats they can actually sit in, look to the other three corners. Sections 204 to 207, 221 to 224, and 231 to 234 all have tickets in the $319 price range (but check your specific seat: the jump to $418 occurs in the middle of a section). The views will be identical, and as the direction the Whitecaps will attack towards in each half is determined by a coin flip it's not like you're going to miss anything. Savvy commuters should gravitate towards sections 221 to 224, as the exits there are closest to the Stadium-Chinatown SkyTrain station.

Those of you willing to spend a little more money aren't entirely safe from the horror of standing, singing fans. Reports from the Vancouver Province's Marc Weber say that the away supporters section will be located in sections 218 and 219, marked above in red. It's reasonable to assume that they won't be given the entirety of both of these sections, but we haven't yet heard where the dividing line will be. These are normally $589 season tickets, and some seats in these sections are designated no-alcohol-permitted, meaning that families will gravitate to these areas. It's an odd decision, but what it means for those of you buying tickets is that when Seattle or Portland are in town those sections will be rocking with vocal, sometimes abusive enemy supporters. They'll be just like the Southsiders, except cheering for the other team. Those who want a quieter experience should avoid those sections like the plague. There is plenty of other no-alcohol seating in the stadium, including sections 221, 222, and 217.

My last words are addressed to you rich folk who want a great view of the game and damn the price. First off, where did you get that money and can I please have some? Secondly, there's no functional difference in quality of view between the $798 tickets on the east side of the stadium and the $969 tickets on the west side. Even the seats will be the same wide club seats that high-priced fans are used to. The difference is exclusively made up in perks: the more expensive tickets have a higher priority to purchase parking and access to exclusive concessions. I assume you didn't get all that money by just throwing it away needlessly, and unless you really need the best parking spots available I'd take the $798 tickets (and be warned that, between Vancouver Canucks games sometimes clashing with the same parking lots and the relatively limited parking that is snapped up by Lions and Whitecaps suite holders and VIPs first of all, even the best parking available may not be all that good). Otherwise, you get the same view of the same game in the same chairs. Plus, the guys in the $969 seats can see you when you wave your extra $170 mockingly towards them.

Hopefully, this information will allow you to make an informed decision on where you want your Whitecaps season tickets. If there's anything else you need to know, please leave a comment and we will try to rustle up the information.